Effect of Hafnium Addition on the Hydrogenation Process of TiFe Alloy

Ti-V-based body-centered cubic (BCC) alloys have potential for large-scale hydrogen storage if expensive vanadium is substituted with much cheaper Fe-containing ferrovanadium. Use of ferrovanadium reduces the alloys’ hydrogen storage capacity. This is puzzling since the amount of Fe is low and hydrogen atoms are accommodated in interstitial sites which are partly coordinated by Fe in many intermetallic compounds. The present work is aimed at finding a structural explanation for Fe-induced capacity loss in Ti-V alloys. Since such alloys and their hydrides are highly disordered without long-range occupational order of the different metal species, it was necessary to employ a technique which is sensitive to local structure. Neutron total scattering coupled with reverse Monte Carlo modelling was thus employed to elucidate short-range atomic correlations in Ti0.63V0.27Fe0.10D1.73 from the pair distribution function. It was found that Fe atoms form clusters and that the majority of the vacant interstitial sites are within these clusters. These clusters take the same face-centered cubic structure as the Ti-V matrix in the deuteride and thus they are not simply unreacted Fe which has a BCC structure. The presence of Fe clusters is confirmed by transmission electron microscopy. Density functional theory calculations indicate that the clustering is driven by thermodynamics.
Keywords: hydrogen storage; BCC alloys; neutron total scattering; reverse Monte Carlo modelling hydrogen storage; BCC alloys; neutron total scattering; reverse Monte Carlo modelling

The potentially catastrophic consequences of our reliance on fossil fuels have led to a world-wide effort to increase the share of renewables in the global energy mix. Most renewable energy sources, such as wind and solar power, are highly intermittent and should be coupled with energy storage devices that can save excess energy for use when the sun is not shining and the wind does not blow. Batteries are excellent for small- and medium-scale energy storage but are limited by cost for large-scale applications. A viable alternative is to use excess energy to produce hydrogen from water by electrolysis. The hydrogen can later be fed to a fuel cell to produce electricity on demand. However, gaseous hydrogen has a very low density even at high pressure, leading to low volumetric energy density for hydrogen gas-based energy storage systems. Moreover, gas compression itself is energy consuming and there are safety issues with storing large amounts of pressurized hydrogen, as demonstrated by the recent explosion in a Norwegian hydrogen filling station [1].
Safer and much more compact hydrogen storage can be achieved in solid metal hydrides, but all investigated hydrogen storage materials come with drawbacks such as low gravimetric hydrogen content, poor hydrogen sorption kinetics, unfavorable stabilities and/or capacity loss on cycling [2]. For instance, many LaNi5-based alloys have excellent hydrogen absorption kinetics and cyclability at near-ambient conditions, but can only store about 1.3 wt% hydrogen. MgH2 contains 7.6 wt% hydrogen but is very stable and must be heated above 300 °C to release it [3,4]. The EU project HyCare (https://hycare-project.eu/) is currently developing a hydrogen storage tank based on TiFe-alloys with hydrogen capacities around 1.9 wt%. Complex hydrides generally have high hydrogen content but poor cyclability [5,6].
Body-centered cubic (BCC) alloys based on titanium and vanadium form hydrogen storage materials that do not excel in any particular aspect but have decent overall performance. They form face-centered cubic (FCC) hydrides that hold significantly more hydrogen than LaNi5, up to around 3 wt% H, and the stability and kinetics are tuneable by varying the Ti/V ratio [7] or by alloying with other transition elements. The alloying elements can be dissolved in the BCC phase [8,9] or give secondary phases, e.g., Laves phases, that enhance the hydrogen sorption properties [10,11]. Unfortunately, vanadium is prohibitively expensive for large scale applications. A workaround is to use much cheaper ferrovanadium which contains 20%–50% Fe and other minor impurities. Several studies have shown that use of ferrovanadium rather than pure vanadium in BCC alloys can be beneficial for the hydrogen sorption kinetics, but it usually comes at the cost of reduced hydrogen capacity [12,13,14,15]. Intuitively, this might seem reasonable since Ti and V are both hydride-forming elements while Fe is not. However, there are many examples of intermetallic hydrides with hydrogen accommodating interstitial sites that are coordinated by several Fe or other non-hydride-forming elements. For instance, 80% of the hydrogen in Zr2FeH5 is situated in Zr3Fe tetrahedra [16] and solely Zr2Fe2 tetrahedral sites are occupied by hydrogen in ZrFe2H2.66 [17]. Ti-V-based BCC alloys are solid solutions with the different metal atoms distributed over a single crystallographic site. A typical composition for hydrogen storage applications is Ti0.7V0.3. Substitution of pure vanadium with ferrovanadium would typically result in about 10 mol% Fe in the alloy. Assuming a random distribution of the elements in the solid solution, 99.6% of the tetrahedral sites would then be coordinated by at least two hydride-forming elements (Ti and/or V) and expected to be accessible for hydrogen occupation. Thus, the reported capacity losses with ferrovanadium [12,13,14,15] cannot be explained from the average crystal structure, which is obtained, e.g., from powder diffraction and Rietveld refinements (Figure 1). To understand the capacity loss from a structural perspective, we need a technique that is sensitive to the local structure. This study uses neutron total scattering, i.e., measurements of both Bragg and diffuse scattering, to investigate short-range metal-metal and metal-hydrogen correlations to explain the capacity loss induced by iron in a Ti-V BCC alloy. Since ferrovanadium also contains other impurities such as oxygen, we chose to make the samples from high purity (99% or more) Ti, V and Fe metals since the total scattering analyses benefits greatly from single phase samples and requires precise knowledge of elemental composition.

Neutron total scattering and RMC modelling has revealed strong short-range ordering in the FCC deuteride Ti0.63V0.27Fe0.10D1.73, which explains the hydrogen capacity loss compared to Ti-V hydrides/deuterides without Fe. The Fe atoms have a strong tendency to form clusters which are unfavorable for deuterium occupation since Fe is not a hydride-forming element. The clusters are also observed by TEM/EDS. DFT calculations indicate that Fe clustering lowers the energy of both the deuterium-free alloy and the deuteride, and that it is a thermodynamic effect rather than a result of inadequate synthesis conditions.

The work was conducted within the project TOTSCAT funded by the Research Council of Norway’s program SYNKNØYT (project number 218409).

The skilful assistance of the SNBL staff is gratefully acknowledged. 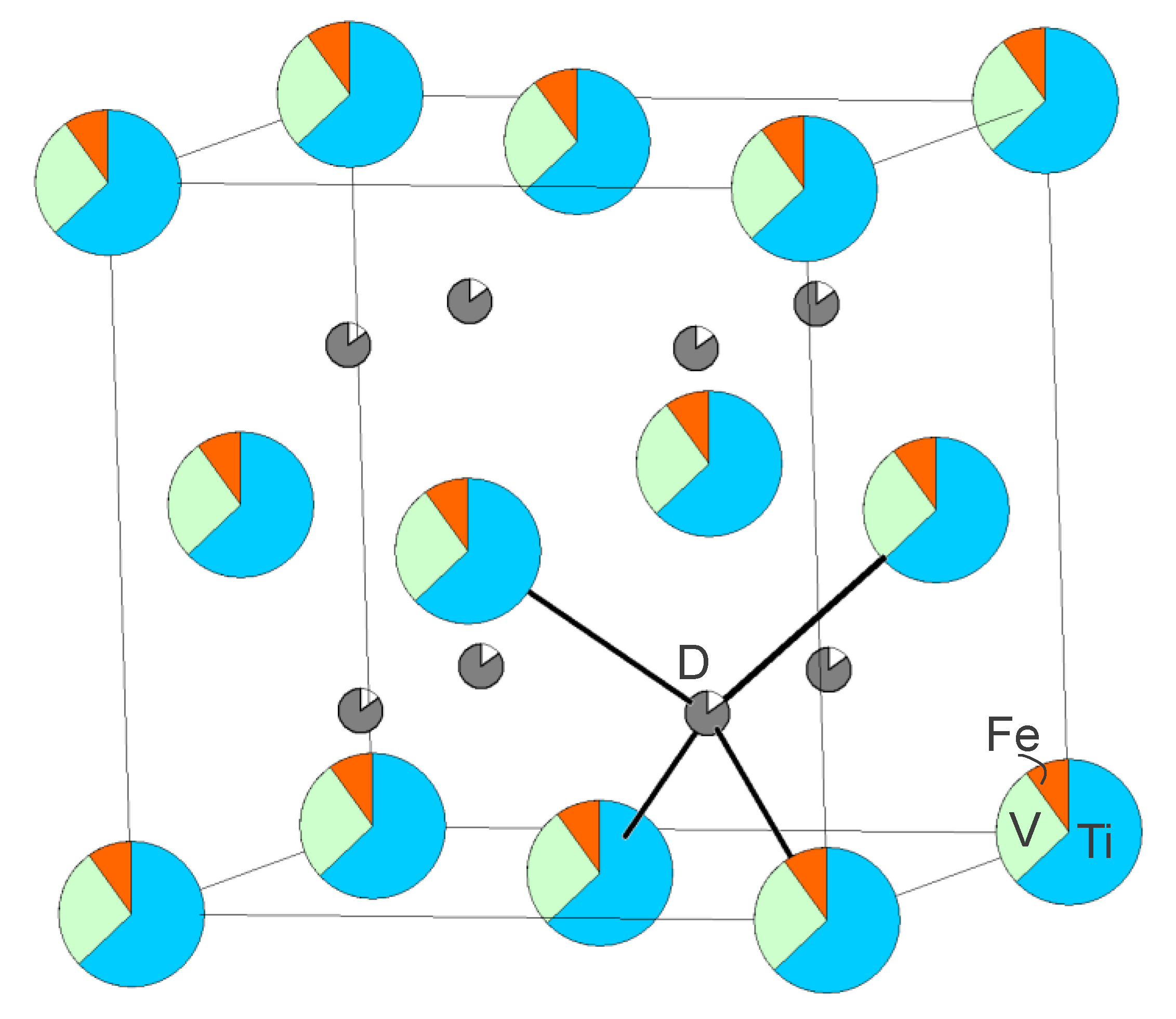 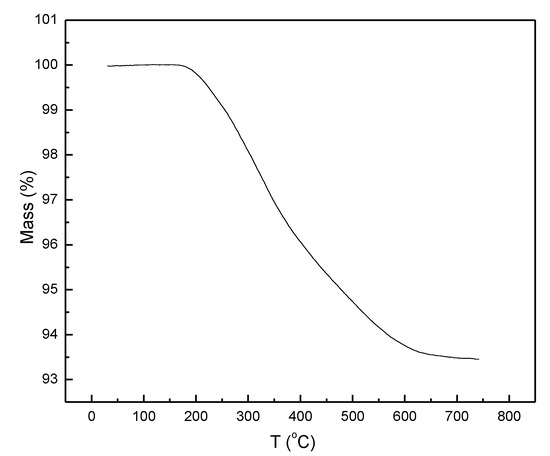 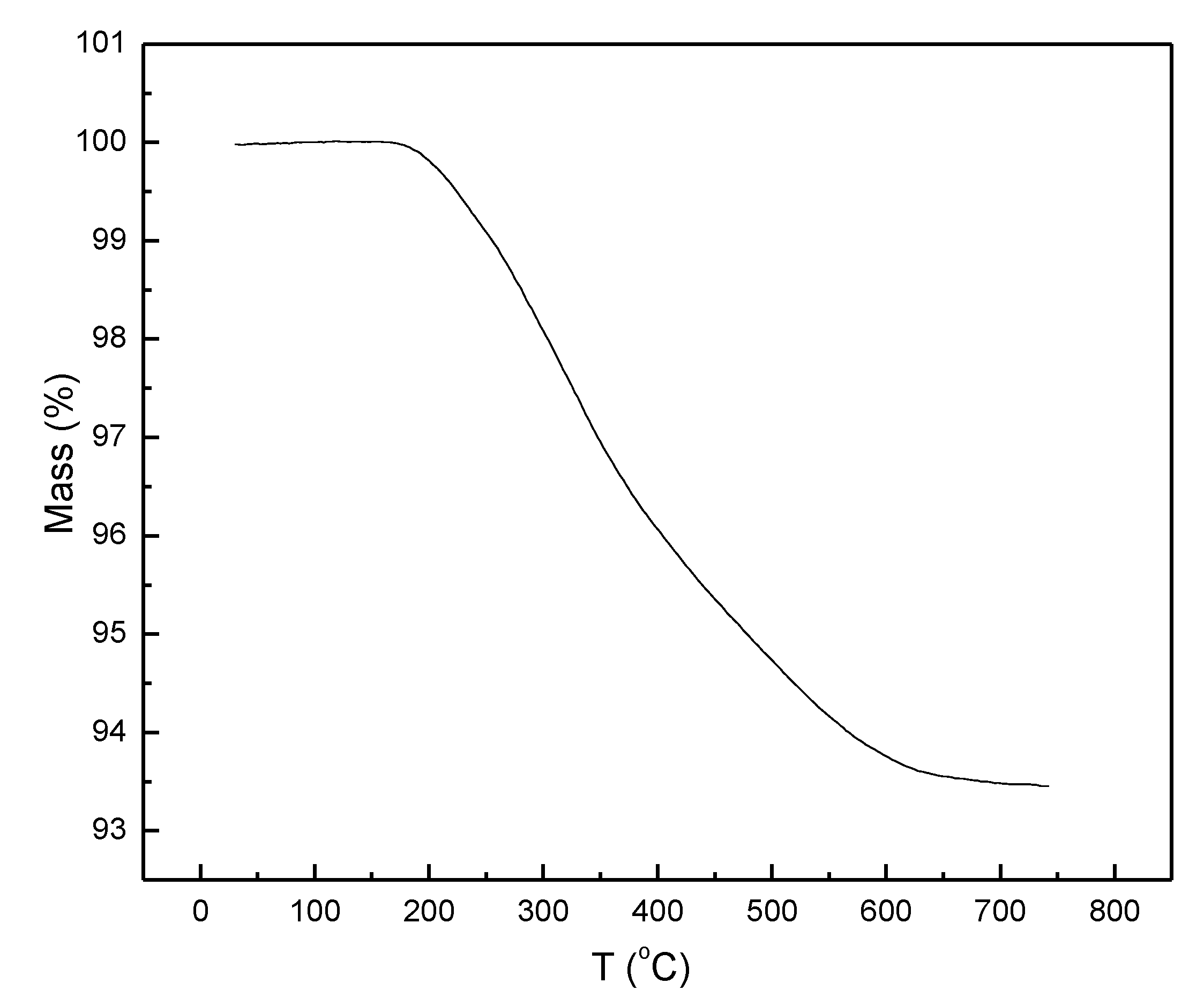 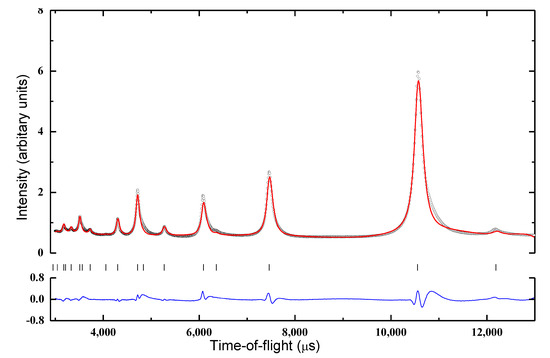 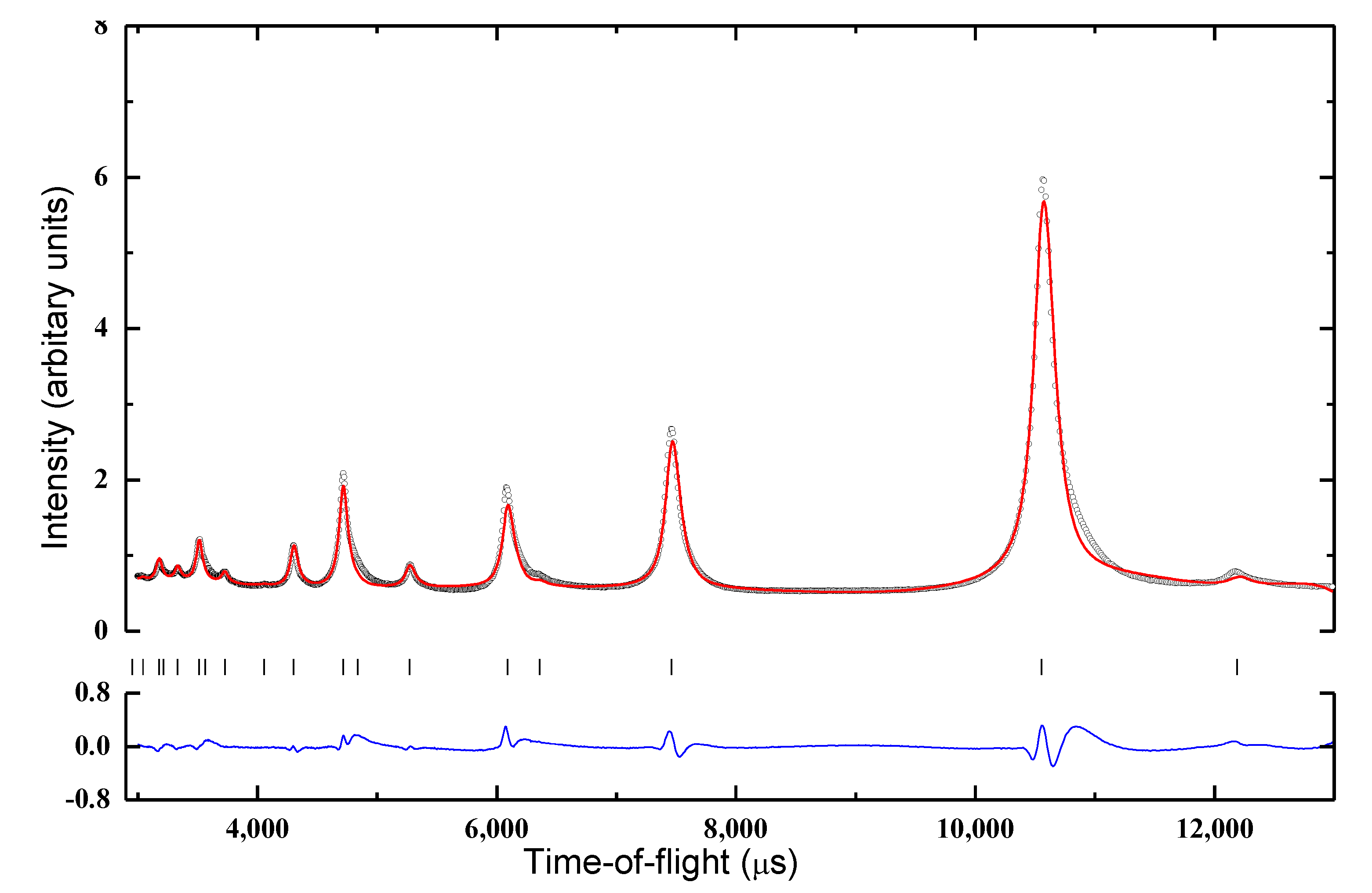 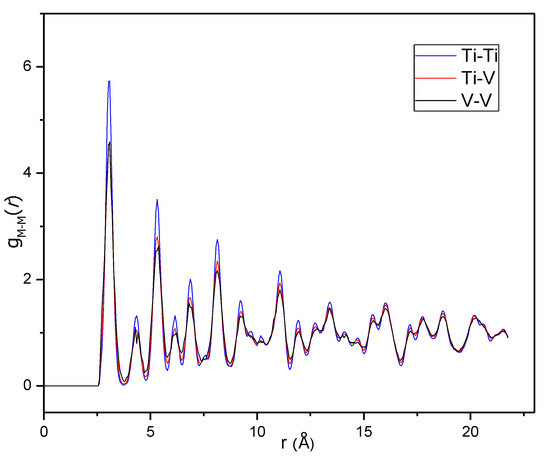 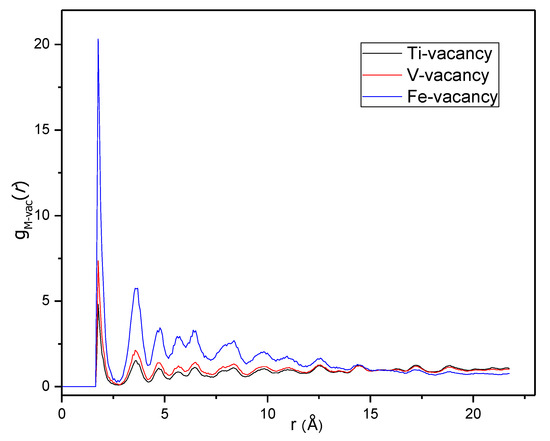 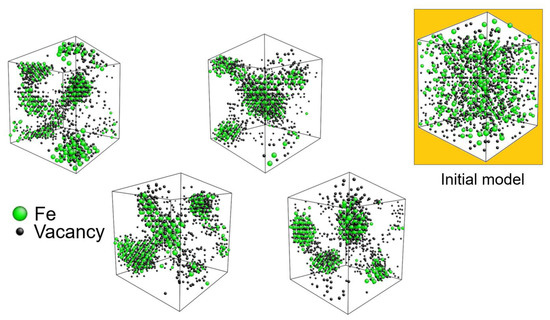