On the Role of Regulatory Policy on the Business Case for Energy Storage in Both EU and UK Energy Systems: Barriers and Enablers

This paper presents a SWOT analysis of the impact of recent EU regulatory changes on the business case for energy storage (ES) using the UK as a case study. ES technologies (such as batteries) are key enablers for increasing the share of renewable energy generation and hence decarbonising the electricity system. As such, recent regulatory changes seek to improve the business case for ES technologies on national networks. These changes include removing double network charging for ES, defining and classifying ES in relevant legislations, and clarifying ES ownership along with facilitating its grid access. However, most of the current regulations treat storage in a similar way to bulk generators without paying attention to the different sizes and types of ES. As a result, storage with higher capacity receives significantly higher payment in the capacity market and can be exempt from paying renewable energy promotion taxes. Despite the recent regulatory changes, ES is defined as a generation device, which is a barrier to a wide range of revenue streams from demand side services. Also, regulators avoid disrupting the current energy market structure by creating an independent asset class for ES. Instead, they are encouraging changes that co-exist with the current market and regulatory structure. Therefore, although some of the reviewed market and regulatory changes for ES in this paper are positive, it can be concluded that these changes are not likely to allow a level playing field for ES that encourage its increase on energy networks. View Full-Text
Keywords: energy storage; regulatory barriers; storage policy; market regulations; SWOT analysis energy storage; regulatory barriers; storage policy; market regulations; SWOT analysis
►▼ Show Figures 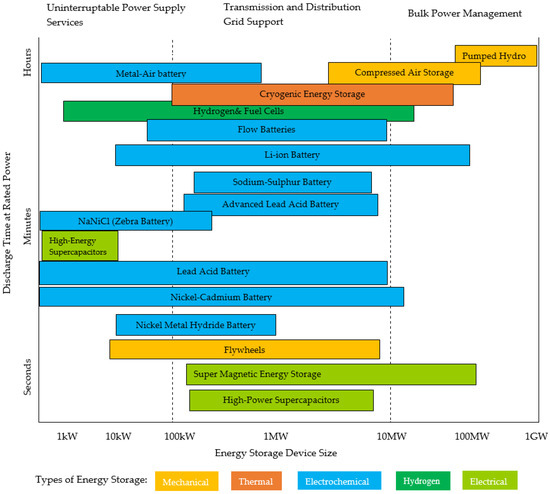