Complex relations exist between issues of poverty, responsibility and just transitions toward reduced household energy use. One proposed transitional instrument is Personal Carbon Accounts (PCAs) which provide equal per capita carbon allowances and increase costs for additional usage. Previously modelled PCAs show that a third of households in poverty must curtail usage or pay more for some of their fuel, hitherto making PCAs ethically and politically untenable. Using the UK’s “Understanding Society” database, average per capita carbon allowances and—using occupancy data—the hypothetical allowance each household would receive within a PCA scheme are calculated. Occupancy levels, equivalised incomes and conversion of expenditure to carbon emissions permit analysis of households emitting more or less carbon compared to their allocation. We demonstrate that households emitting greater than average levels of CO2 do so mainly for lifestyle reasons, irrespective of income. Any calculation of legitimate social and environmental cost of CO2, even for households in poverty, must consider questions of choice and capacity to act. This suggests that even if certain low income, high emitting households are disadvantaged by the transition associated with personal carbon allowances this may still be a just transition. View Full-Text
Keywords: just transitions; low-income energy choices; poverty; energy and choice; personal carbon allowances just transitions; low-income energy choices; poverty; energy and choice; personal carbon allowances
►▼ Show Figures 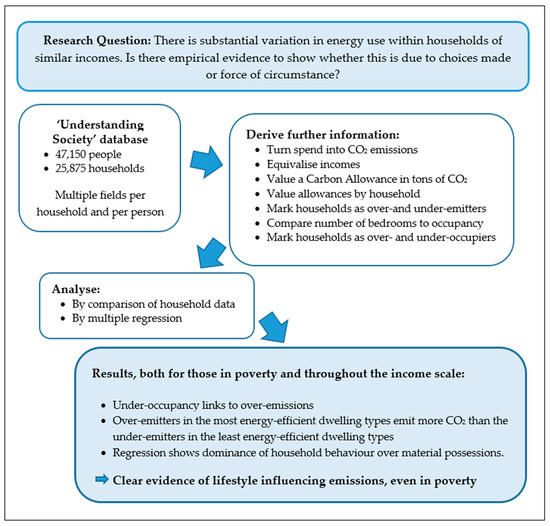