Many developing countries suffer from high energy-import dependency and inadequate electrification of rural areas, which aggravates the poverty problem. In this work, Al-Tafilah in Jordan was considered as a case study, where the technical, economic, and environmental benefits of a decentralized hybrid renewable energy system that can match 100% of the city demand were investigated. A tri-hybrid system of wind, solar, and hydropower was integrated with an energy storage system and optimized to maximize the match between the energy demand and production profiles. The optimization aimed at maximizing the renewable energy system (RES) fraction while keeping the levelized cost of electricity (LCOE) equal to the electricity purchase tariff. The techno-economic analysis showed that the optimal system in Al-Tafilah comprises a 28 MW wind system, 75.4 MW PV, and 1 MW hydropower, with a 259 MWh energy storage system, for which a RES fraction of 99% can be achieved, and 47,160 MtCO2 are avoided yearly. This study can be easily extended to other rural cities in Jordan, as they have higher renewable energy system (RES) potential. The presented findings are essential not only for Jordan’s planning and economy-boosting but also for contributing to the ongoing force against climate change. View Full-Text
Keywords: Energy hybridization; hydropower; wind energy; solar energy; rural areas; 100% Renewable grid Energy hybridization; hydropower; wind energy; solar energy; rural areas; 100% Renewable grid
►▼ Show Figures 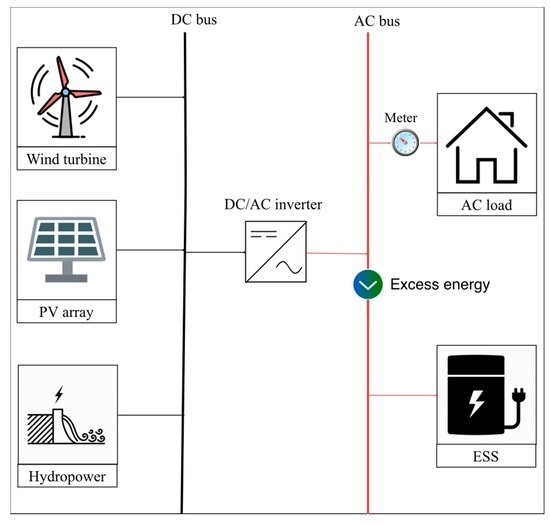