The Virtual Flow Simulator (VFS-Wind) code [23,24,25] is employed in this work to simulate wakes from the two turbines, which solves the incompressible Navier–Stokes equations in curvilinear coordinates shown as follows: where () are the Cartesian coordinates, () are the curvilinear coordinates, denotes the contravariant volume flux, are the velocity vector in Cartesian coordinates, J is the Jacobian of the geometric transformation, represent the transformation metrics, represents the contravariant metric tensor, ρ is the density, μ is the dynamic viscosity, p is the pressure, are the body forces from actuator type turbine models, and is the subgrid scale stress modeled using the dynamic subgrid scale model [26]. The governing equations are discretized in space using a second-order central differencing scheme and in time using a second-order accurate fractional step method. The pressure Poisson equation is solved using an algebraic multigrid acceleration along with GMRES solver. The momentum equation is solved using the matrix-free Newton–Krylov method. The VFS-Wind code has been validated extensively using laboratory and field measurements [21,24] and applied to utility-scale wind turbines [22,27,28].
The actuator surface models for turbine blades and nacelle developed in [25] are employed in this work. In the actuator surface model for turbine blades, the blade is represented with the actuator surface defined by chords at different radial locations. Forces computed using the blade element method are distributed on the actuator surface to represent the effect of blades on the incoming flow. Compared with the actuator line parameterization, the actuator surface can represent better the geometrical effect of the blade in the chordwise direction. A model for the nacelle is also necessary for accurately predicting turbine wakes, which affects the hub vortex and meandering in the far wake [29]. In this work the nacelle is represented using an actuator surface formed by the actual surface of the nacelle. The effects of nacelle on the incoming flow are modeled using distributed forces with the wall-normal component calculated by satisfying the no-flux boundary condition and the wall-tangent component calculated by specifying a friction coefficient.

3.1. Specifics of the Employed Turbine Design

A full-scale wind turbine and a subscale wind turbine are studied in this work as shown in Figure 1. The diameters of the two turbines are 80 m and 27 m, respectively. The full-scale turbine T80 is located 93.3 m above the ground, while the subscale turbine T27 is located 31.5 m above the ground. The T27 turbine is designed by Kelley et al. in [30] (Design A). The T80 turbine is designed by simply scaling the T27 turbine, such that the radial distributions of the twist angle and the normalized chord length (as shown in Figure 2) are the same for the two turbines. It is noticed that the T27 turbine has the same rotor diameter and hub height as the SWiFT turbine but with different designs as shown in Figure 2 and Table 1. The scaling ratio is chosen in a way the size of the full-scale turbine is similar to that of a land-based wind turbine. The radial distribution of the airfoil shapes is shown in Table 1. For the present cases, the tip speed ratio is 9. The power coefficient, (where P is the power, R is the rotor radius, D is the rotor diameter, and U is the incoming wind speed), is 0.47 and 0.49 for the turbine T80 and T27, respectively. The thrust coefficient, (where T is the thrust), is 0.65 and 0.68 for the turbine T80 and T27, respectively. The incoming wind speed U employed for calculating and is obtained by averaging the time-averaged velocity over a disk of radius R parallel with the rotor rotating plane and located upwind of the turbine. The same lift and drag coefficients are employed for both turbines to ensure dynamic similarity and to simplify the problem such that the only two differences are the turbine size and the inflow.

The sizes of the computational domain are and with the corresponding numbers of grid nodes and for T80 and T27 turbine simulations, respectively, where x, y and z represent the downwind, lateral and vertical directions, respectively, and δ = 1000 m is the boundary layer thickness. The width () and the height () of the computational domain are set being the same as those of the precursory simulation. In the downwind direction, the length of the computational domain () is 15 rotor diameters for both cases. The turbine is located from the inlet plane. The length of the computational domain, although it is much shorter than its width, is typical for simulations of stand-alone wind turbines [4,22], and will not affect incoming large-scale coherent structures as they are generated from a precursory simulation. In the downwind direction, the grid nodes are uniformly distributed with grid spacing . In the other two directions, the grids are uniformly distributed in the near turbine region ( and , where is the turbine coordinate in the lateral direction) with the grid spacing and gradually stretched to boundaries of the computational domain. Employing the actuator surface model requires higher spatial resolutions. A grid of spacing was employed in [21], where the same actuator surface model is applied to predict the coherent tip vortices of a utility-scale wind turbine. In [25], on the other hand, a grid of spacing was shown being enough for the same actuator surface model to accurately predict the wake statistics of a hydrokinetic turbine, e.g., the velocity deficit and turbulence kinetic energy, which are also of interest in this work. Based on this study and the other work for a utility-scale wind turbine [27], we believe that the resolution of the employed grid is enough for the quantities of interest in this work. The sizes of time step are and for T80 and T27 cases, respectively, where and D are their own incoming downwind velocity at hub height and diameter, respectively.
The roughness length of the ground is m, which represents the field characteristics at the SWiFT site. The thermal stratification is neutral. The free-slip boundary condition and the logarithmic law for rough walls are applied at the top and bottom of the computational domain, respectively. The periodic boundary condition is applied in the lateral direction. The same inflow is applied in the two simulations, which is generated from a precursory simulation. In the precursory simulation, the computational domain is . The grid nodes are uniformly distributed in the horizontal directions, while are stretched in the vertical direction with the height of the first off wall grid cell . Periodic boundary conditions are applied in the horizontal directions. At the ground and top boundary of the domain, boundary conditions the same as those in the wind turbine simulations are employed. The size of time step is . The statistics of the inflow generated from the precursory simulation is shown in Figure 3. In the precursory simulation, the velocity fields on a plane at every time step are saved. Since the spatial and temporal resolutions of the precursory simulation are different from those of the turbine simulations, linear interpolations are employed in both space and time in order to apply the obtained inflow on the inlet plane of the wind turbine simulation.
In both cases, simulations are first carried out to a full developed state, and then further advanced in time for 100 and 70 rotor revolutions to compute time-averaged quantities for T80 and T27 cases, respectively. It is noted in Section 4 that the profiles of turbulence kinetic energy at rotor upwind are not smooth enough. Although a similar number of rotor revolutions for temporal averaging has been employed in a hydrokinetic turbine case [32], further averaging in time is probably needed especially to take into account the low frequency variations caused by incoming large eddies. However, it will require about 1000 rotor revolutions [27] or even more, which is time-consuming and not realistic for this study. Taking the T80 case as an example, as one rotor revolution needs about 3.5 h wall clock time by using 640 compute cores, simulating 1000 rotor revolutions will take about 5 months wall clock time. As shown in Section 4, the profiles of turbulence kinetic energy and other quantities in the turbine wake are fairly smooth, so we believe that the main conclusions drawn from this work are not affected by the length of temporal averaging.

In this work we investigated the wake from a full-scale turbine (T80) and a subscale turbine (T27) using the VFS-Wind code to carry out large-eddy simulation with actuator surface models for turbine blades and nacelle. The T80 turbine is 2.96 times larger than the T27 turbine in terms of both rotor diameter and hub height. In both cases, the same turbulent inflow is employed. The same lift and drag coefficients are also employed for the two turbines. The key differences between the inflows for the two cases are the different distributions of wind shear and turbulence intensity across the rotor caused by different rotor diameters and different hub heights. The computed results show differences between the two cases for both velocity deficits and turbine-added turbulence kinetic energy. It is observed that the wake center of the T27 turbine shifts upwards in the far wake of the turbine (e.g., more than above the hub height at downwind the rotor), which remains at hub height for the T80 turbine. The maximum turbulence kinetic energy in the wake of the T27 turbine is higher than that from the T80 case in the near wake region (e.g., more than 20% higher at downwind the rotor), but decreases rapidly and becomes lower than that from the T80 turbine at further downwind locations (e.g., about 50% lower at downwind the rotor). We explore the reason for these differences by examining the budgets for the mean kinetic energy. Compared with the T80 case, we found that the MKE entrainment for the T27 case is higher for the lateral component of the turbulence convection term, while lower for the vertical component of the turbulence convection term. This explains the upward shift of wake center for the T27 case. We also examined the turbulence production term. It is observed that the magnitude of the turbulence production term from the T27 case is significantly higher than that from the T80 case in the near wake region, which explains the higher turbulence kinetic energy in the near wake for the T27 case. Both the inflow turbulence and the size of the turbine relative to the incoming eddies may cause these observed differences in the wake characteristics. Further study (e.g., space-time correlation study [35]) is needed to probe in more depth the underlying cause for the differences between the two turbines of different scales. A systematic study on the wakes from turbines of different scales for different turbulent inflows is also needed to further investigate the phenomenon observed in this work.

This work was supported by Department of Energy DOE (DE-EE0002980, DE-EE0005482 and DE-AC04- 94AL85000). Computational resources were provided by Sandia National Laboratories and the University of Minnesota Supercomputing Institute. 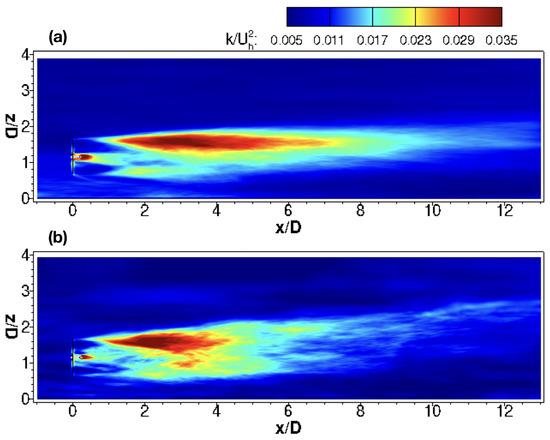 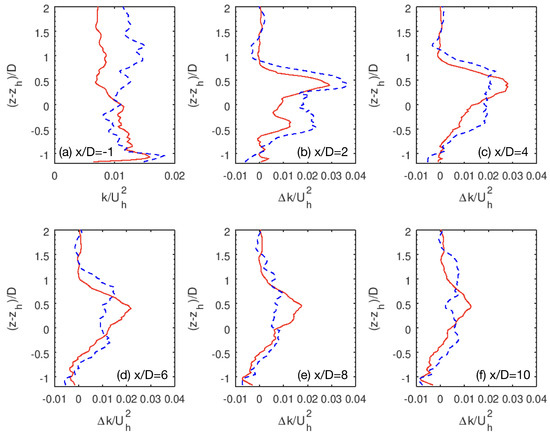 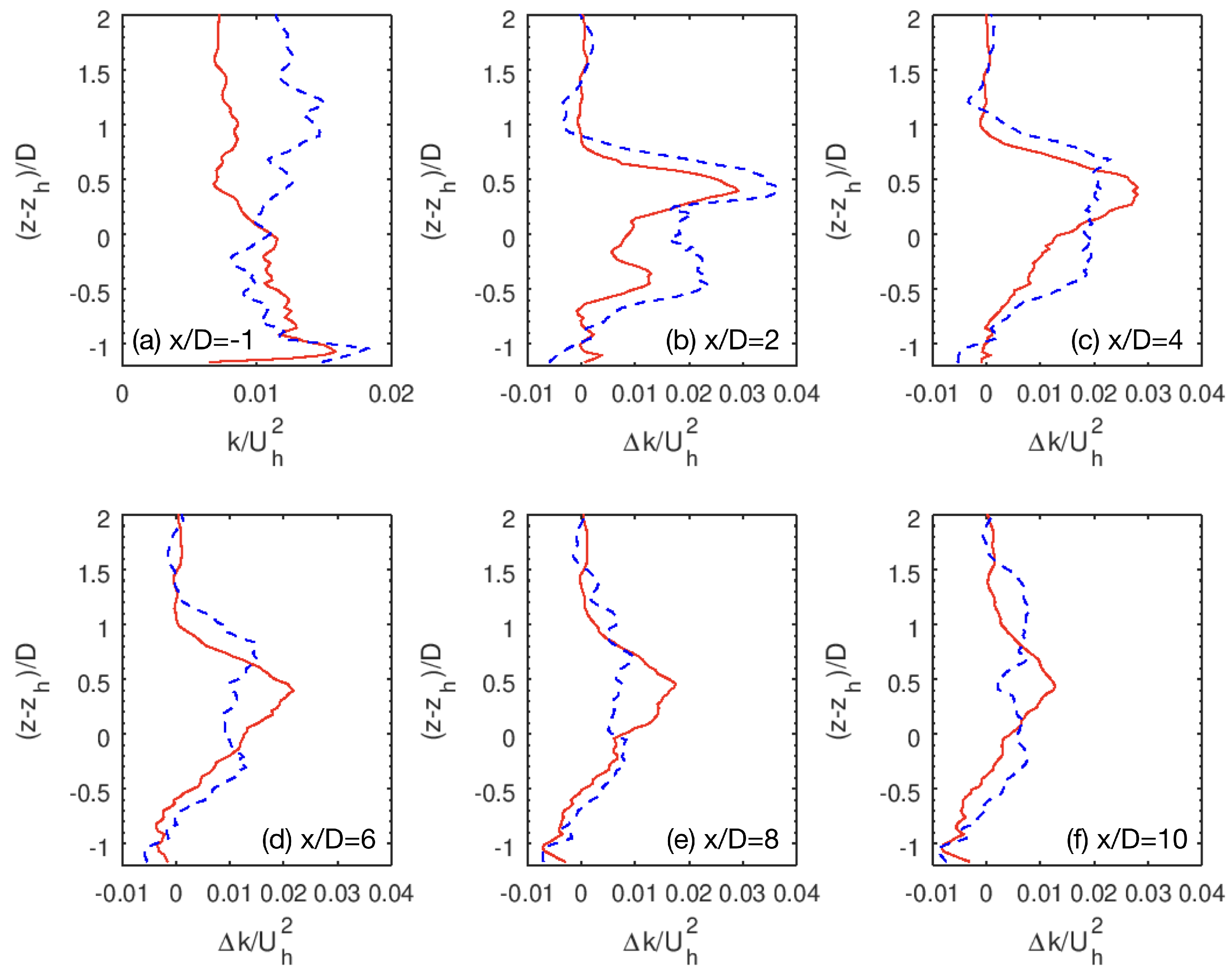 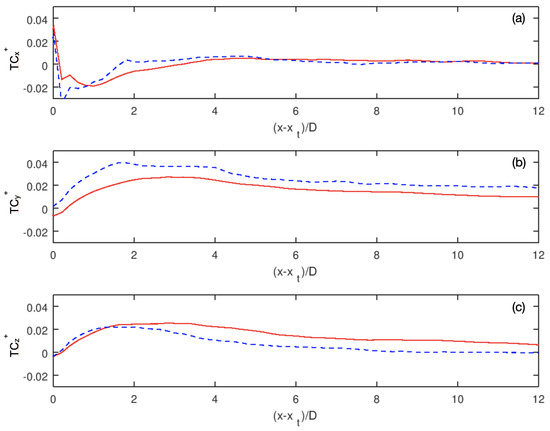 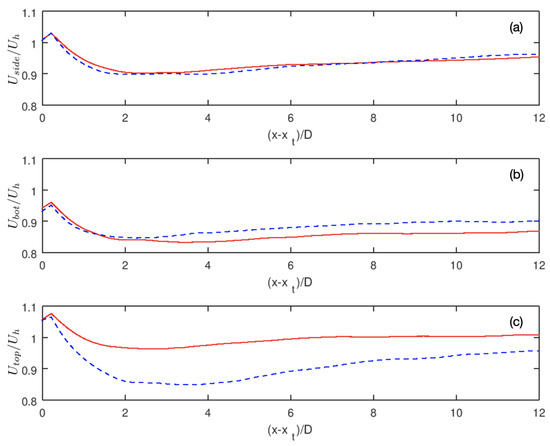