Let us consider the steady, axisymmetric and incompressible flow of a second-grade fluid flowing over an inclined stretchable cylinder under the appliance of a transverse magnetic field.
The tensor describing the flow analysis for concerning fluid is presented as follows:
In the above expression and are the material moduli and is given by where we can write
Thus, the equations for motion, energy and concentration are expressed as
The present flow situation is subjected to the following boundary conditions,
Invoking the similarity variables,
Employing the transformations, Equations (4)–(6) taken as the form, we get
Here the derivatives of the function are indicated by a prime with respect to , and and are the viscoelastic parameter and Hartmann number, respectively. in which where is the curvature parameter, is the Darcy number, is the Dufour number, is the Soret number, is the thermal Grashof number, is the solutal Grashof number, is the radiation parameter, and and are the thermal and concentration Biot numbers, respectively.
Nusselt and Sherwood mass flux coefficients are expressed as and , and with the skin-friction co-efficient , are the physical quantities of interest expressed as
In dimensionless form

The problem comprising Equations (9)–(11) is handled numerically by way of the Keller Box scheme. Firstly, Equations (9)–(11) are reduced to the initial value problem by utilizing a new variable given by then, Equations (9)–(11) become along with the B. C′s
By using the central difference gradients and the average at the mid points of the net derivatives, the following relation is approximated:
Equations (20)–(23) then become where , etc.
Equations (26)–(28) are in algebraic form and therefore have to be linear equations before the implementation of factorization. We write the Newton iterations in the following way:
By substituting these expressions into Equations (26)–(28) and neglecting the second-order and higher-order terms in , a linear tri-diagonal system of equations will be found as follows:
Subject to boundary conditions where
In the matrix vector form, we can write in which where in Equation (37) the components are defined by
Now, we let where where is the unit matrix while and are matrices whose elements are found by the following expressions:
Equation (38) can be substituted into Equation (37) to get
Once the element of is found, Equation (38) can be used to find the iteration. The procedure described above is implemented in Mathematica and results are displayed in the next section.

To scrutinize the flow features of the second-grade fluid along with the effect of the magnetic field, radiative heat flux, viscous dissipation, and a double diffusion (Dufour and Soret) solution of Equations (9)–(11) is essential. Before getting to the solution of the coupled system, it is highly important to look at the nature and complexity of it. After sighting the system, it is clear that the momentum equation mentioned in Equation (9) is a third order equation, whereas Equations (10)–(11), i.e., the temperature and concentration equations, are second-order equations. So, there are various approaches (finite difference, finite element and finite volume) to get to the solution of these equations. Among them the best is the finite difference approach for such type of problems, so the Keller Box differencing scheme is implemented. Figure 1, Figure 2 and Figure 3 are displayed to portray the behavior of the velocity distribution against the relative parameters. To see the impacts of viscoelastic parameter on second grade velocity field SVF, Figure 1 is plotted. Variation in velocity against ( is measured for . An increasing trend in velocity is sketched against an increasing . This behavior is justified by the mathematical representation of that by increasing the magnitude of , viscosity decreases as a result of the velocity of the fluid mounts and chaotic behavior uplifts. Here, it is productive to mention that for , the present problem reduces to the Newtonian case. From a boundary layer point of view, the thickness of the fluid increases with an increase in . Figure 2 indicates the incrementing behavior of velocity against inciting the magnitude of the curvature parameter ). The reason is that by the increasing curvature parameter, bending of the surface as well as the radius decreases. Hence, less friction will be offered to fluid molecules by the surface and velocity uplifts. A declining trend in velocity is depicted against the Darcy parameter (Da) in Figure 3. Since the Darcy parameter (Da) represents the presence of a porous medium, suggests porosity creates a high resistance to fluid molecules and as an outcome velocity declines. Variation in the thermal profile against influencing parameters are disclosed in Figure 4, Figure 5 and Figure 6. Figure 4 is manifested to excogitate the impression of radiation parameter (R) on the thermal field. An increasing pattern in temperature is observed by choosing R = 0.5, 1.0, 1.5, 2.0 and by fixing . It is because of the fact that energy flux increases and consequently fluid temperature increases. In Figure 5, the effect of the thermal Biot number () on θ(η) is presented. By definition, the thermal Biot number is directly related to the heat transfer coefficient generated by the hot fluid. Thus, as the thermal Biot number increases, the convection due to the hot fluid raises and the temperature mounts. Impacts of the Dufour (Du) and Soret (Sr) aspects on the thermal field is disclosed in Figure 6. In the present graph, the values of (Du) and (Sr) are selected in such a way that their product will give a constant magnitude. By growing the Dufour number (i.e., by declining the Soret number) the thermal change between the hot and ambient fluid increases, which enhances the temperature. Figure 7, Figure 8 and Figure 9 are plotted to predict the changes in the concentration profile with respect to the involved parameters like . Figure 7 presents the impression of the curvature parameter γ on the concentration profile. Duality in concentration features are interpreted against the curvature parameter. For small values of η, i.e., (η < 2), the concentration decreases whereas it increases when η > 3. The upshot of the concentration Biot number on ϕ(η) is captured in Figure 8. From the drawn curves it is portrayed that by increasing the concentration field the associated boundary layer thickness increases. The joint conspiration of (Sr) and (Du) on the concentration field is divulged in Figure 9. It is interpreted that by decreasing (Sr) and increasing (Du) the strength of the intermolecular forces weakens and as a consequence the concentration field declines. Table 1, Table 2 and Table 3 are enumerated to record the variation in the Nusselt number (, Sherwood number and coefficient of skin-friction for numerous values of involved parameters. Excellent correlation is noticed between our results and findings made by Hayat et al. [31]. This comparison between attained figures assures the credibility of the current work.

The current communication is devoted to explicate the flow features of magnetohydrodynamic boundary layer flow of a second-grade fluid over an inclined porous cylinder under the impacts of viscos dissipation, radiation, convective heating, and Dufour and Soret effects. The mathematical modelling is attained in the form of partial differential equations and converted into ordinary differential equations by employing compatible transformations. Afterwards the solution is accomplished by using an implicit finite difference method known as the Keller Box scheme. The impact of the involved variables on velocity, temperature and concentration profiles is excogitated through graphical visualizations. Assurance of the present findings is achieved by constructing comparative analysis with previously published literature. The key findings are summarized as follows:

(i)
Increasing aptitude of velocity within the boundary layer region is depicted against the curvature parameter;
(ii)
It is found that the velocity profile upsurges against the viscoelastic parameter whereas it declines by uplifting the Darcy parameter;
(iii)
The thermal Biot number raises the temperature profile and also enriches the magnitude of the Nusselt number;
(iv)
Concentration of the Biot number causes growth in the concentration profile and augments the mass flux coefficient;
(v)
Dufour and Soret effects enhance the temperature field and depreciate the concentration profile.

Formulation done by S.B. and A.H.M.; problem solved by R.M. and S.B.; results computed by I.K. and A.H.S.; results discussed by E.-S.M.S.; all authors contributed equally in writing the manuscript. All authors have read and agreed to the published version of the manuscript. 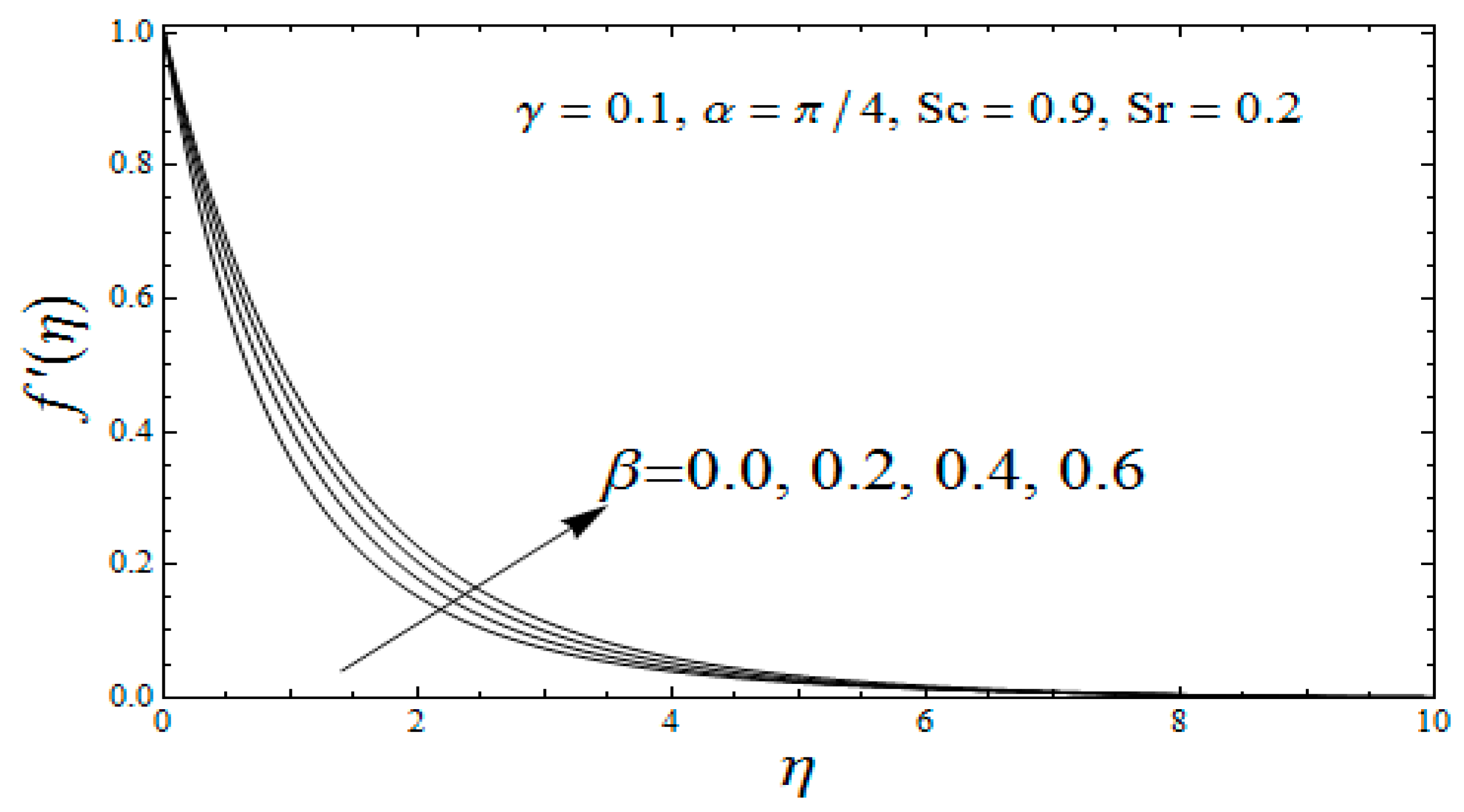 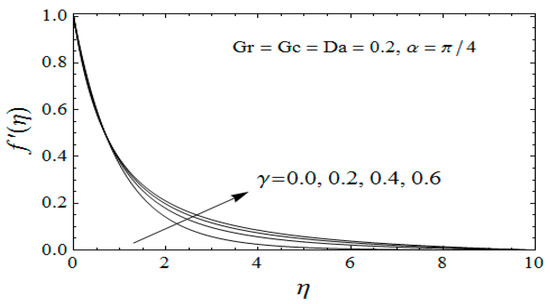 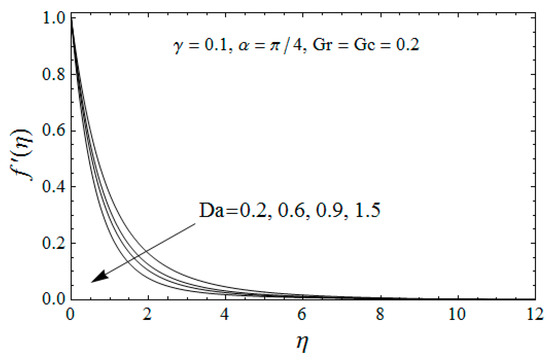 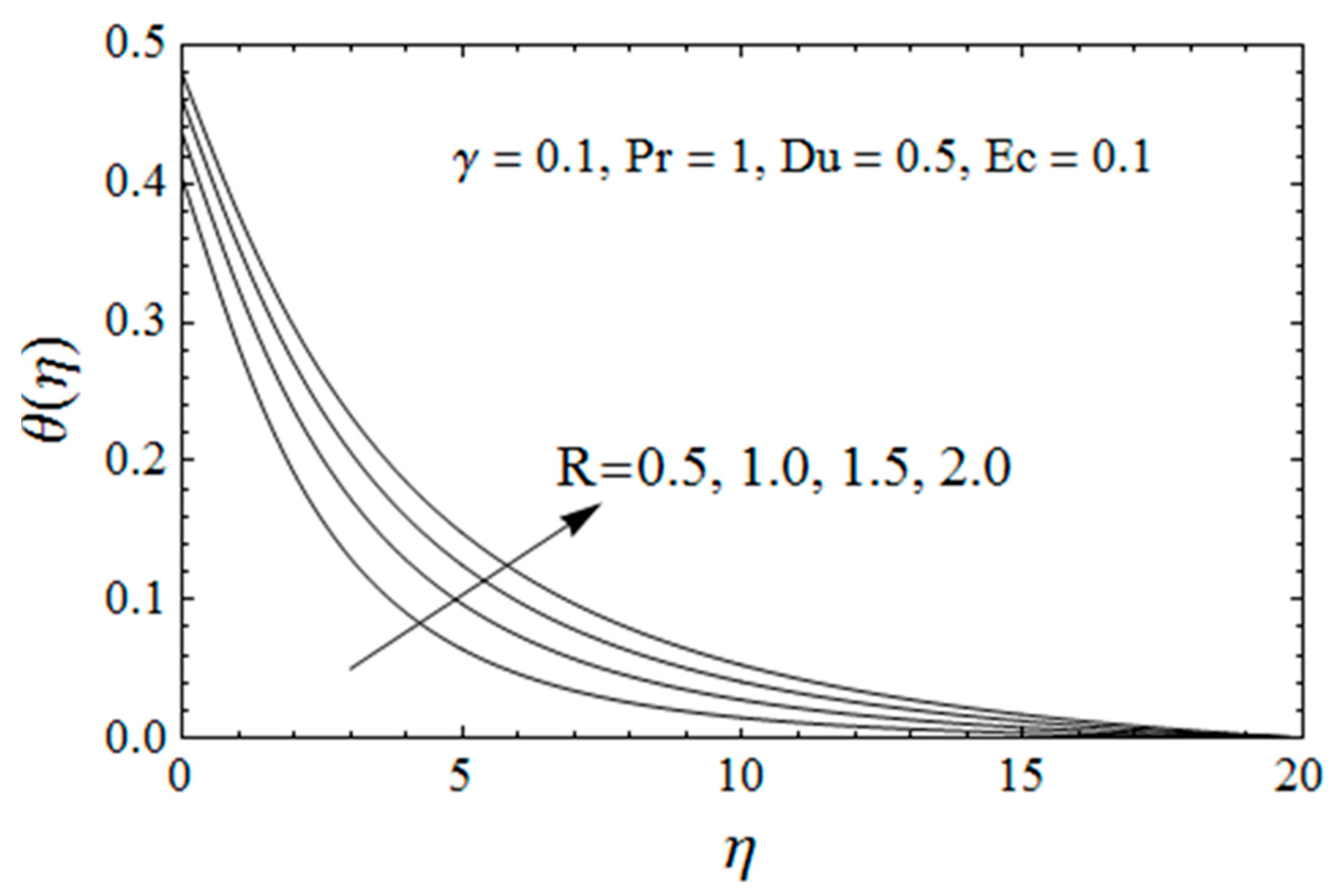 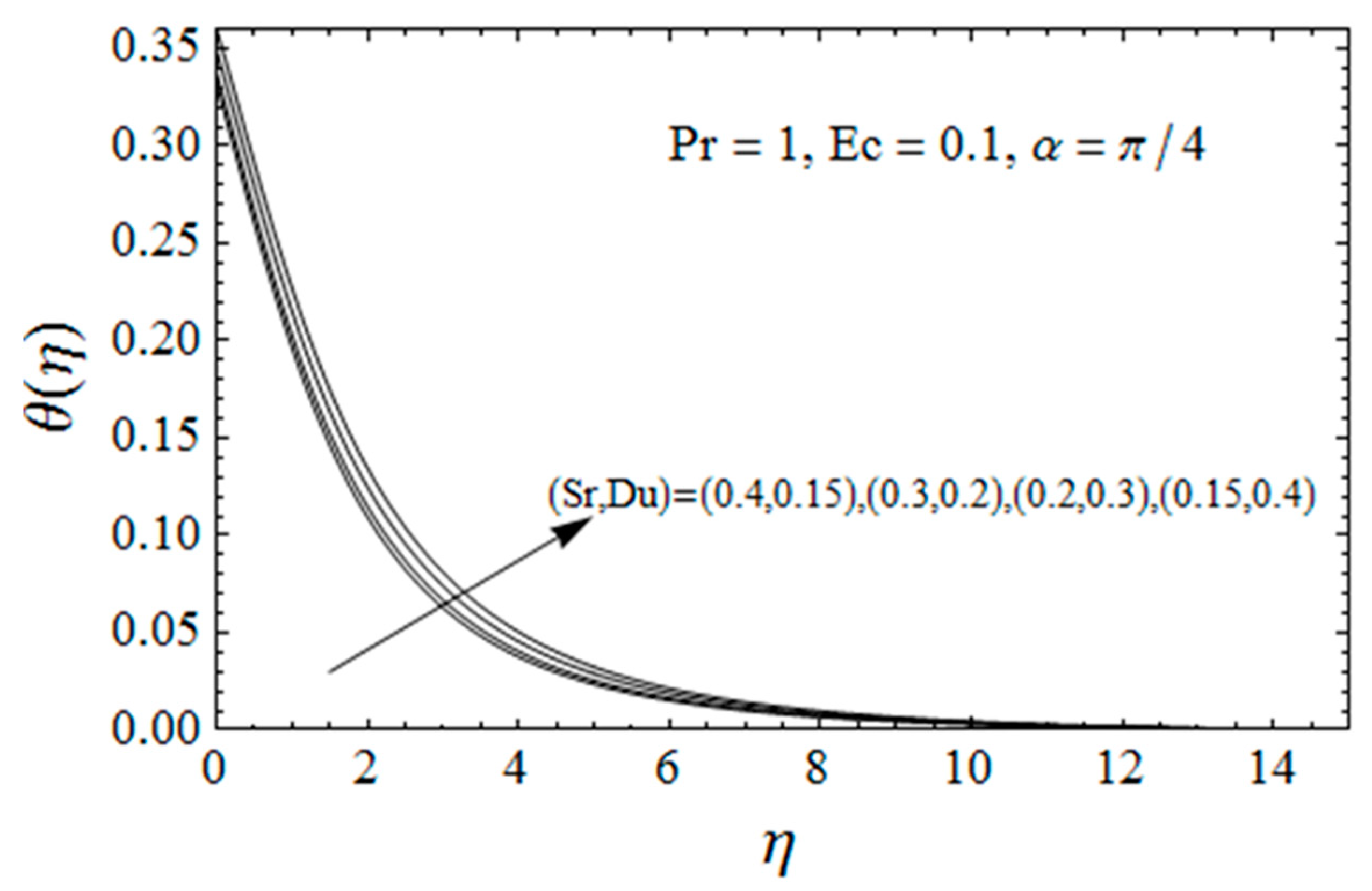 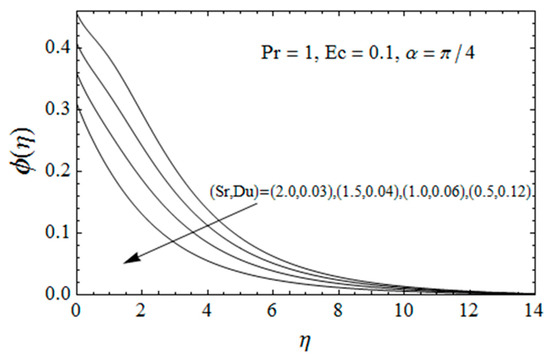