Electric vehicles (EVs) with wireless power transfer (WPT) systems are convenient, but WPT technology will produce a strong stray electromagnetic field (EMF) in the surrounding space when the system works with high power. Shielding coils can reduce stray EMF efficiently without additional control, and they have advantages of being simple, light, and cheap. In this paper, the series-opposing structure is compared systematically with the inductive structure based on circuit theory and electromagnetic field theory. Simplified circuit models are proposed to give an intuitive and comprehensive analysis of transfer efficiency. Electric field analysis and finite element analysis (FEA) is used to explain the functional principles of shielding coils and to compare the EMF distribution excited by two structures. The simulation results show that both structures decrease the mutual inductance and perform better than the system without shielding coils when they have the same transfer efficiency. Further, the inductive structure system performs best. The most important between two structures is that the shielding effects is independent of turns of shielding coils for inductive structure, while it can be adjusted by changing turns of shielding coils for the series-opposing structure. The experimental results show that the EMF is reduced by 65% for the inductive structure and 40% for the series-opposing structure. The theoretical analysis is confirmed by experimental results. View Full-Text
Keywords: wireless power transfer (WPT); electric vehicles (EVs); electromagnetic field (EMF); finite element analysis (FEA) wireless power transfer (WPT); electric vehicles (EVs); electromagnetic field (EMF); finite element analysis (FEA)
►▼ Show Figures 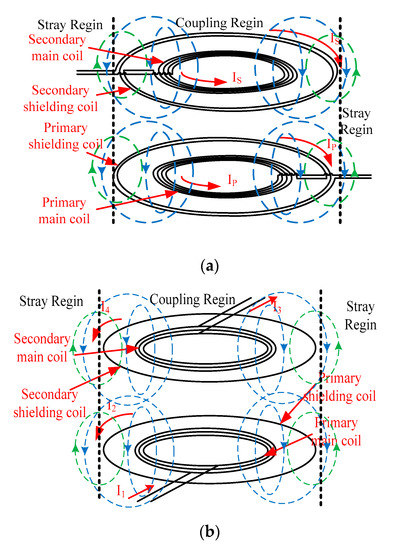