The low gas-to-liquid mass transfer rate is one of the main challenges in syngas biomethanation. In this work, a new concept of the floating membrane system with high gas hold-up was introduced in order to enhance the mass transfer rate of the process. In addition, the effect of the inoculum-to-syngas ratio was investigated. The experiments were conducted at 55 °C with an anaerobic mixed culture in both batch and continuous modes. According to the results from the continuous experiments, the H2 and CO conversion rates in the floating membrane bioreactor were approximately 38% and 28% higher in comparison to the free (suspended) cell bioreactors. The doubling of the thickness of the membrane bed resulted in an increase of the conversion rates of H2 and CO by approximately 6% and 12%, respectively. The highest H2 and CO consumption rates and CH4 production rate recorded were approximately 22 mmol/(L·d), 50 mmol/(L·d), and 34.41 mmol/(L·d), respectively, obtained at the highest inoculum-to-syngas ratio of 0.2 g/mL. To conclude, the use of the floating membrane system enhanced the syngas biomethanation rates, while a thicker membrane bed resulted in even higher syngas conversion rates. Moreover, the increase of the inoculum-to-syngas ratio of up to 0.2 g/mL favored the syngas conversion. View Full-Text
Keywords: floating MBR; syngas-to-biomethane conversion; high gas hold-up; inoculum-to-syngas ratio floating MBR; syngas-to-biomethane conversion; high gas hold-up; inoculum-to-syngas ratio
►▼ Show Figures 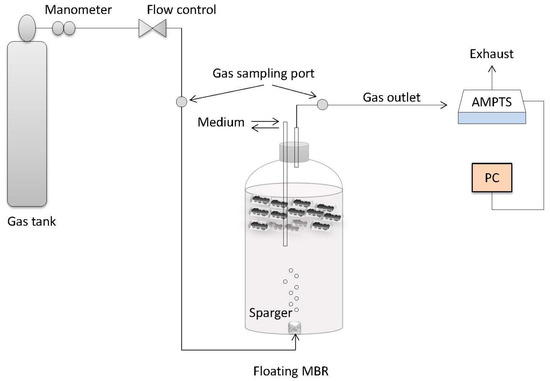