Blackout prevention on dynamically positioned vessels during closed bus bar operation, which allows more efficient and eco-friendly operation of main diesel generators, is the subject of numerous studies. Developed solutions rely mostly on the ability of propulsion frequency converters to limit the power flow from the grid to propulsion motors almost instantly, which reduces available torque until the power system is fully restored after failure. In this paper, a different approach is presented where large scale energy storage is used to take part of the load during the time interval from failure of one of the generators until the synchronization and loading of a stand-by generator. In order to analyze power system behavior during the worst case fault scenario and peak power situations, and to determine the required parameters of the energy storage system, a dynamic simulation model of a ship electrical power system is used. It is concluded that implementation of large scale energy storage can increase the stability and reliability of a vessel’s electrical power system without the need for the reduction of propulsion power during a fault. Based on parameters obtained from simulations, existing energy storage systems were evaluated, and the possibility of their implementation in the maritime transportation sector was considered. Finally, an evaluation model of energy storage implementation cost-effectiveness was presented. View Full-Text
Keywords: energy storage; ship’s electrical power system; dynamic positioning; blackout prevention; maritime transportation energy storage; ship’s electrical power system; dynamic positioning; blackout prevention; maritime transportation
►▼ Show Figures 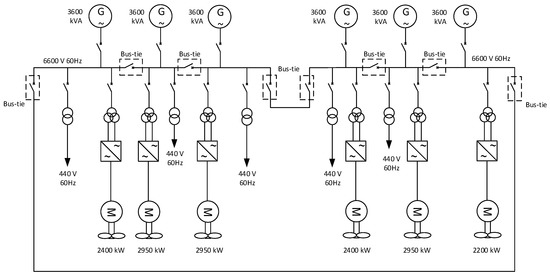