Community-Led Micro-Hydropower Development and Landcare: A Case Study of Networking Activities of Local Residents and Farmers in the Gokase Township (Japan)
Next Article in Special Issue

Is the Fischer-Tropsch Conversion of Biogas-Derived Syngas to Liquid Fuels Feasible at Atmospheric Pressure?
Previous Article in Special Issue

Measures to reduce carbon dioxide emissions are often considered separately, in terms of electricity, heating, transport, and industry. This can lead to the measures being prioritised in the wrong sectors, and neglects interactions between the sectors. In addition, studies often focus on specific greenhouse gas reduction targets, despite the uncertainty regarding what targets are desirable and when. In this paper, these issues are examined for the period after 2030 in an existing openly-available, hourly-resolved, per-country, and highly-renewable model of the European energy system, PyPSA-Eur-Sec-30, that includes electricity, land transport, and space and water heating. A parameter sweep of different reduction targets for direct carbon dioxide emissions is performed, ranging from no target down to zero direct emissions. The composition of system investments, the interactions between the energy sectors, shadow prices, and the market values of the system components are analysed as the carbon dioxide limit changes. Electricity and land transport are defossilised first, while the reduction of emissions in space and water heating is delayed by the expense of new components and the difficulty of supplying heat during cold spells with low wind and solar power generation. For deep carbon dioxide reduction, power-to-gas changes the system dynamics by reducing curtailment and increasing the market values of wind and solar power. Using this model setup, cost projections for 2030, and optimal cross-border transmission, the costs of a zero-direct-emission system in these sectors are marginally cheaper than today’s system, even before the health and environmental benefits are taken into account. View Full-Text
Keywords: energy system optimisation; carbon dioxide reduction; renewable energy; sector-coupling; open energy modelling; market value energy system optimisation; carbon dioxide reduction; renewable energy; sector-coupling; open energy modelling; market value
►▼ Show Figures 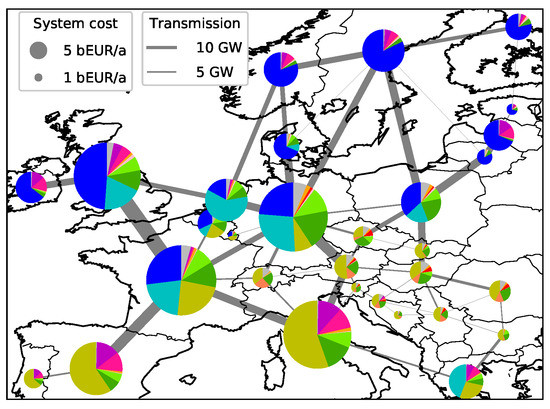