Analysis of the Methodology to Obtain Several Key Indicators Performance (KIP), by Energy Retrofitting of the Actual Building to the District Heating Fuelled by Biomass, Focusing on nZEB Goal: Case of Study
Previous Article in Special Issue

The forecasting of future values is a very challenging task. In almost all scientific disciplines, the analysis of time series provides useful information and even economic benefits. In this context, this paper proposes a novel hybrid algorithm to forecast functional time series with arbitrary prediction horizons. It integrates a well-known clustering functional data algorithm into a forecasting strategy based on pattern sequence similarity, which was originally developed for discrete time series. The new approach assumes that some patterns are repeated over time, and it attempts to discover them and evaluate their immediate future. Hence, the algorithm first applies a clustering functional time series algorithm, i.e., it assigns labels to every data unit (it may represent either one hour, or one day, or any arbitrary length). As a result, the time series is transformed into a sequence of labels. Later, it retrieves the sequence of labels occurring just after the sample that we want to be forecasted. This sequence is searched for within the historical data, and every time it is found, the sample immediately after is stored. Once the searching process is terminated, the output is generated by weighting all stored data. The performance of the approach has been tested on real-world datasets related to electricity demand and compared to other existing methods, reporting very promising results. Finally, a statistical significance test has been carried out to confirm the suitability of the election of the compared methods. In conclusion, a novel algorithm to forecast functional time series is proposed with very satisfactory results when assessed in the context of electricity demand. View Full-Text
Keywords: time series; functional data; forecasting; pattern sequence similarity time series; functional data; forecasting; pattern sequence similarity
►▼ Show Figures 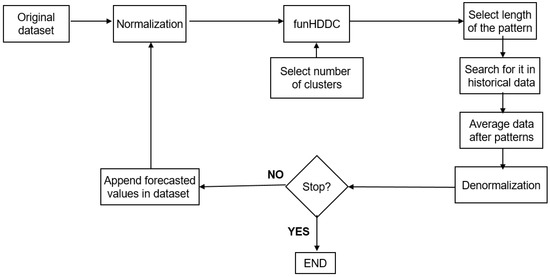