This paper proposes a novel on-board electric vehicle (EV) battery charger (EVBC) based on a bidirectional multilevel topology. The proposed topology is formed by an AC-DC converter for the grid-side interface and by a DC-DC converter for the battery-side interface. Both converters are interfaced by a split DC-link used to achieve distinct voltage levels in both converters. Characteristically, the proposed EVBC operates with sinusoidal grid-side current, unitary power factor, controlled battery-side current or voltage, and controlled DC-link voltages. The grid-side converter operates with five voltage levels, while the battery-side operates with three voltage levels. An assessment, for comparison with classical multilevel converters for EVBCs is considered along the paper, illustrating the key benefits of the proposed topology. As the proposed EVBC is controlled in bidirectional mode, targeting the EV incorporation into smart grids, the grid-to-vehicle (G2V) and vehicle-to-grid (V2G) operation modes are discussed and evaluated. Both converters of the proposed EVBC use discrete-time predictive control algorithms, which are described in the paper. An experimental validation was performed under real operating conditions, employing a developed laboratory prototype. View Full-Text
Keywords: multilevel converter; electric vehicle; on-board battery charger; power factor correction; power quality; smart grid multilevel converter; electric vehicle; on-board battery charger; power factor correction; power quality; smart grid
►▼ Show Figures 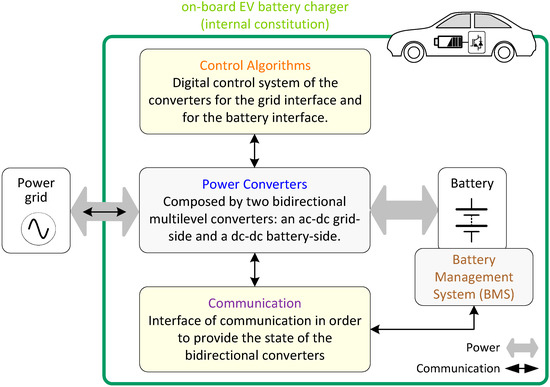