Flow separation is the source of several problems in a wind turbine including load fluctuations, lift losses, and vibrations. Vortex generators (VGs) are passive flow control devices used to delay flow separation, but their implementation may produce overload drag at the blade section where they are placed. In the current work, a computational model of different geometries of vortex generators placed on a flat plate has been carried out throughout fully meshed computational simulations using Reynolds Averaged Navier-Stokes (RANS) equations performed at a Reynolds number of = 2600 based on local boundary layer (BL) momentum thickness = 2.4 mm. A flow characterization of the wake behind the vortex generator has been done with the aim of evaluating the performance of three vortex generator geometries, namely Rectangular VG, Triangular VG, and Symmetrical VG NACA0012. The location of the primary vortex has been evaluated by the vertical and lateral trajectories and it has been found that for all analyzed VG geometries the primary vortex is developed below the boundary layer thickness = 20 mm for a similar vorticity level (). Two innovative parameters have been developed in the present work for evaluating the vortex size and the vortex strength: Half-Life Surface and Mean Positive Circulation . As a result, an assessment of the VG performance has been carried out by all analyzed parameters and the symmetrical vortex generator NACA0012 has provided good efficiency in energy transfer compared with the Rectangular VG. View Full-Text
Keywords: vortex generators; flow control; computational fluid dynamics; OpenFOAM vortex generators; flow control; computational fluid dynamics; OpenFOAM
►▼ Show Figures 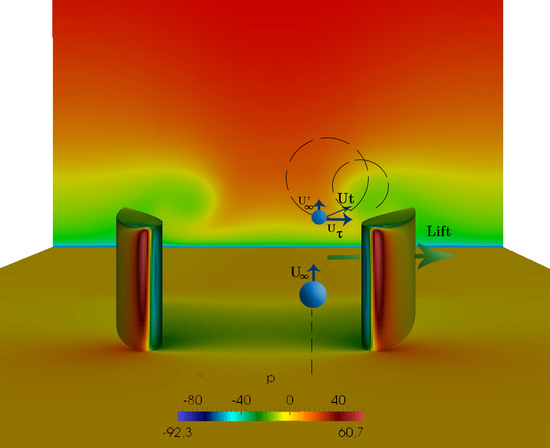