The application of lithium ion batteries in hybrid-electric vehicles and electric vehicle applications to meet the system demands of high energy and power energy storage have received much attention [1,2,3,4]. In order to serve as an appropriate power source, some series connections for a number of unit batteries are applied to increase the battery voltage and some parallel connections for raising the current capacity. In addition, the batteries are often operated under harsh electrical and thermal conditions, such as high discharging current rates and extreme ambient temperatures [5,6]. Under the operating conditions, lithium ion battery packs may generate plenty of heat and subsequently experience rapidly raising temperatures. The thermal uniformity and thermal runaway phenomena of the battery pack can cause different effects, such as a growing internal resistance and a significant drop in the battery voltage, resulting in damage to the batteries and shortening of the battery life. Thus, thermal issues in lithium ion batteries should be addressed to maintain their reliability in order to prolong their service life during use as power sources.
To meet the safety requirements in hybrid- and electric-vehicle applications, the ability to predict the transient local thermal and electrochemical behavior in three dimensions (3D) will be essential for their design and control methodologies. In recent works, 1D electrochemical models coupled with 2D or 3D thermal models for lithium-ion batteries have been used. Most of the work has been focused on the model for simulating the charge/discharge curves, concentration profiles and temperature variation on the surface for a certain charge/discharge curve, so it is necessary to design an appropriate battery pack. In recent works, it has been reported that the temperature distribution for battery packs is the most important parameter which must be monitored and evaluated. Chen and Evans [7] presented a model for simulating the cooling process in Li ion batteries. The temperature distribution could be provided and a method for improving the temperature distribution using a cooling system was proposed, and better insulation materials have also been applied. A thermal model for a LiFePO4/graphite lithium ion battery was presented in [8]. Based on the proposed model, the battery thermal resistance was calculated using parameters like heat capacity, heat transfer coefficients and temperature. Reference [9] presented an intercoupled electrochemical thermal model for a lithium ion battery including thermal circuits and equivalent electrical. Mills and Al-Hallaj [10] designed a natural cooling system for a lithium ion battery using a phase change material (PCM). The results were compared between the passive cooling approach using PCMs and forced air cooling under different operating conditions, like high temperatures and high discharge rates. The temperature of natural air cooling was low enough to be satisfactory as long as the battery operates within a certain temperature range, thus air cooling using fan power was important [11,12]. The researchers did lots of work on the building of battery pack thermal model and designing a cooling mode and structure.
The field synergy principle was presented by Guo et al. [13] and Tao et al. [14], and was validated on numerous heat transfer phenomena [15,16,17,18,19,20,21,22,23,24,25]. The field synergy principle suggests that the heat transfer rate could be optimized by coordinating the velocity field and temperature gradient for a certain situation. For convective mass transfer, Mo et al. [26] analyzed the removal of volatile organic compounds by photocatalytic oxidation reactors using the field synergy principle. The results showed that the average synergy angle between the mass concentration gradient and the velocity vectors could have an effect on the convective mass transfer rate. An optimization synergy angle could be beneficial to maximizing the decontamination of indoor air by ventilation systems. Huang [27] researched the flow and heat transfer of a vehicle cooling system based on the field synergy principle from the unit to the components, from the local to the whole and from the microcosmic to the macrocosmic. Jiang [28] simulated the heat transfer characteristics and resistance of the air around finned tubes and performed in-depth analysis combined with the field synergy principle. Yang et al. [29] investigated the relationship between multi-field cooperation and heat convection stability.
This paper presents an optimization method using the field synergy principle for the lithium ion battery packs used in electric vehicles. An electrochemical-thermal model is built for lithium ion battery heat generation. Thermal analysis of the proposed battery pack is used for describing the temperature distribution in the battery pack. Simulation and numerical results for the proposed battery pack were obtained for different environmental temperatures, outlet positions and distribution modes. The study could provide a guideline to optimize the flow fields that consequently improve the heat transfer in different practical applications.

The temperature and electrochemical processes are intercoupled in a battery [30]. An electrochemical-thermal coupled model is used to predict the thermal responses for the battery unit under different discharge rates and dynamic discharging cycles.
The nomenclature used in the model is listed at the end of the article. Its simulation results are in good agreement with the experimental data. The formulas of electrochemical reaction and physical parameters describe the heat generation and transfer. In this study, the battery pack is made up of single model batteries.

The two-dimensional boundary layer flows and heat transfer along a plate integrating the energy conservation equation would be described by:
Integrating along the Y direction, Equation (1) could be written as:
The non-dimensional treatment for some parameters is: where h is characteristic length, U is velocity vector, um is characteristic velocity, Tw is the wall temperature, Tm is a characteristic temperature, like the average temperature for a fluid.
Equation (2) can then be rewritten as: where Nu, Re, Pr are Prare Nusselt Number, Reynolds number and Prandtl number, respectively. Re = uH/v, Pr = v/a, Nu = hH/k.
According to Equation (4), the Nu is related to Re, Pr and is an integral value. It is obvious that the heat transfer is enhanced by increasing the Nu:
Besides increasing the value of Re and Pr, the most effective way to increase the value of Nu is by increasing cosβ. The synergy angle β is an important parameter for heat transfer. The value of β can be expressed by:
The average field synergy angle could be expressed by:
The field synergy number is defined as:
From the equation above, if the direction of the fluid velocity is closer to that of the heat flux, the effect of convective heat transfer will be better in a laminar flow field.

Figure 1a is a quarter of the schematic view for a battery pack with a planar arrangement, where the air inlet area is 20 cm2 (the dark blue part), the outlet area is the same as the inlet area. The spacing between the batteries is 3 mm, and the temperature monitoring points of the structure are distributed as shown in Figure 1b.
Figure 2 shows the numerical results. The inlet air forms an eddy. The velocity vectors and the isothermal are almost parallel over most of the computational domain, which means that the local concentration gradients and the velocity vectors are nearly vertical to each other, resulting in a large synergy angle between them. According to Figure 3, the air flow passes by the batteries and absorbs the heat from the battery, but the temperature of the air flow rises along the flow path. The temperature rise in the batteries near the air intake is lower than the temperature rise in the back row ones. The air flow rate varies dramatically in the outlet, and easily forms a vortex, going against the flow diffusion.
Table 1 shows the temperature distribution of the battery for different flow rates. As the the air inlet velocity increases, the maximum temperature rise is reduced in the same discharging procedure. The highest temperatures are 13.1, 11.6, 9.4 and 8.6 °C when the inlet air velocities are 0.7, 0.8, 1.0, 1.1 m/s, respectively. The maximum temperature difference is 11.3, 10.0, 8.2 and 7.5 °C for the same situation. The increased air inlet velocity promotes the Reynolds number and the surface convective coefficient, which eventually enhances the overall heat extraction rate. The decreasing field synergy angle indicates an increase in the field synergy number and air utilization efficiency.

3.4. Thermal Responses of the Battery Pack under Different Discharge Mechanisms

The field synergy principle has been applied to analyze heat transfer in order to improve the overall temperature distribution of electric vehicle battery pack systems. In air cooling processes, the overall system cooling capability can be enhanced by increasing the air inlet velocity or by enlarging the synergy between the velocity vectors and the temperature gradients. However, although increases of the air inlet velocity were found to improve the cooling rates, the inlet velocity increases also reduced the field synergy number which leads to a reduction in the air utilization efficiency. Different arrangements of the batteries were compared as well. The cross arrangement was found to have a better heat transfer ability while increasing the disturbance. Moreover, different discharge characteristics like discharging rate and initial air temperature have also been discussed for getting better temperature uniformity. Although the optimal flow field obtained from the heat transfer field synergy equation may differ in practical flow fields in some aspects, the optimized velocity field still provides guidelines to guide flow fields designs that will improve the heat transfer in practical applications. 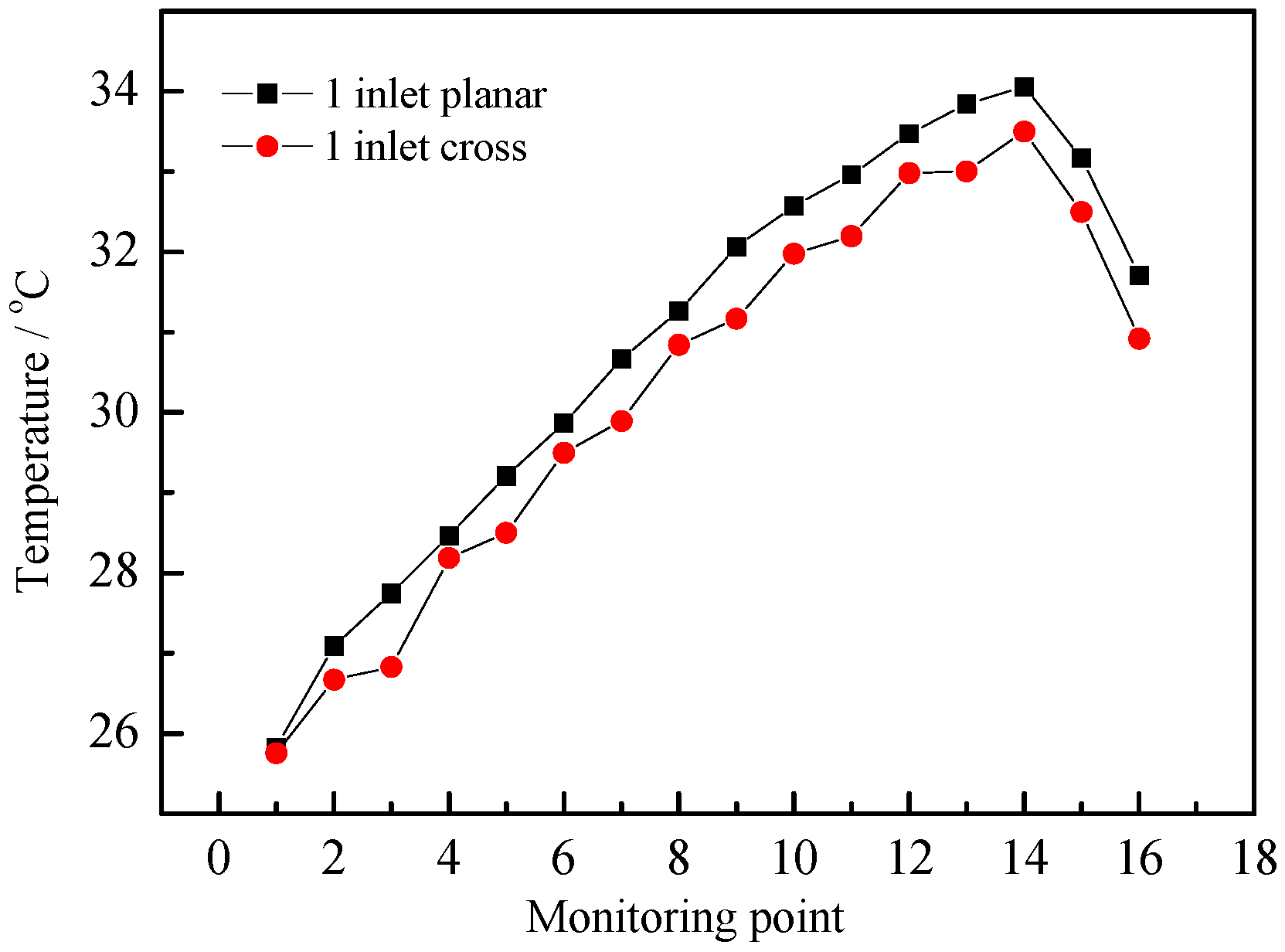 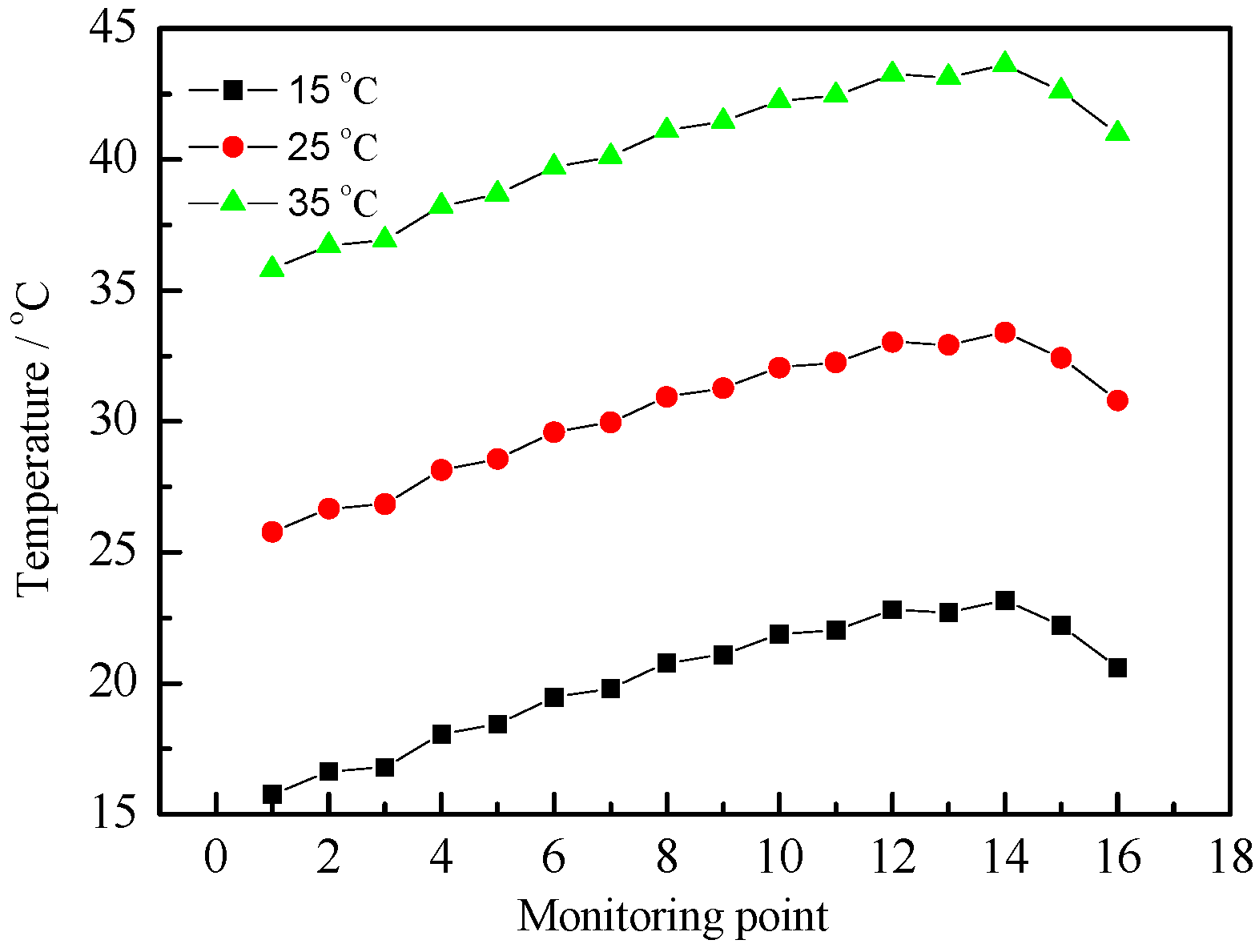