A considerable number of studies have examined the relationship between global prices and local prices in food-importing nations, but the linkages between international prices and the producer prices of large agricultural exporters have been largely ignored. This paper analyzes the connections between world prices and U.S. producer prices in the wheat, soybeans, and corn markets using a vector error correction generalized autoregressive conditional heteroscedastic model with a multivariate Baba-Engle-Kraft Kroner specification (VECM-GARCH-BEKK) and cross-correlation function (CCF). Our findings indicate firstly that a long-run equilibrium relationship exists between international and U.S. producer prices for the three agricultural crops. It also finds a significant bidirectional causality-in-mean and causality-in-variance between international and U.S. producer prices for these crops. Finally, the empirical results suggest that international wheat and corn prices play a leading role in U.S. local markets in return transmissions and that U.S. wheat price can be considered to be a leading indicator of the global wheat price in volatility transmissions. View Full-Text
Keywords: producer price; price transmission; VECM-GARCH-BEKK; Granger causality; volatility spillovers producer price; price transmission; VECM-GARCH-BEKK; Granger causality; volatility spillovers
►▼ Show Figures 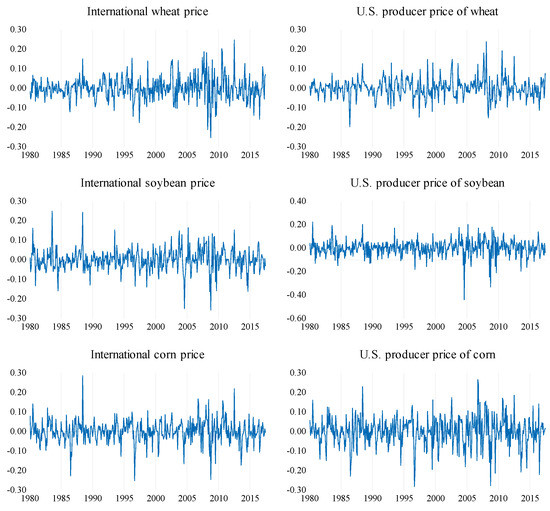