Comparison of Efficacy and Safety of Taxanes Plus Platinum and Fluorouracil Plus Platinum in the First-Line Treatment of Esophageal Cancer: A Systematic Review and Meta-Analysis

Fluoropyrimidine plus platinum (FP) and taxanes plus platinum (TP) are standard treatments for esophageal cancer (EC). This systematic review and meta-analysis aim to explore the difference in the therapeutic effect and toxicity of FP and TP regimens in EC patients. PubMed, Embase, and Cochrane were fully searched and analyzed to find relevant articles on EC patients treated with FP and TP regimens up to 22 March 2022. Thirty-one studies, with a total of 3432 participants, were included in this review. The primary outcomes showed that the prognosis and therapeutic efficacy of TP groups were better than those of FP groups for the EC patients treated with definitive chemoradiotherapy treatment (3-year OS: RR: 1.25, 95% CI: 1.08–1.44, p = 0.003; 3-year PFS: RR: 1.43, 95% CI: 1.17–1.75, p = 0.0006; ORR: RR: 1.17, 95% CI: 1.06–1.29, p = 0.001). However, TP therapy was significantly correlated with a higher incidence of leukopenia and thrombocytopenia (p < 0.05). In the preoperative neoadjuvant chemoradiotherapy group, these two groups had a similar survival time (p > 0.05). The FP regimen corresponded to a higher incidence of thrombocytopenia, while the TP regimen was associated with an increased incidence of febrile leukopenia (p < 0.05). Therefore, TP regimens could generate both superior clinical response and survival benefits when compared with FP regimens in EC patients undergoing definitive chemoradiotherapy.
Keywords: chemoradiotherapy; esophageal cancer; fluorouracil; prognosis; taxanes; therapeutic effect chemoradiotherapy; esophageal cancer; fluorouracil; prognosis; taxanes; therapeutic effect

Esophageal cancer (EC) is one of the most common malignant tumors worldwide [1,2]. GLOBOCAN 2020 reported that EC was listed globally as seventh for incidence and sixth for mortality [2]. Eastern Asia exhibits the highest regional incidence rates, partially because of the large burden in China [3]. The main pathological types of EC are esophageal squamous cell carcinoma (ESCC) and esophageal adenocarcinoma (EAC) [3]. Although the diagnosis and treatment methods have improved significantly in the past decade, the prognosis of EC patients is still lower than expected [1]. At present, surgery still plays a primary role in the treatment of EC; additionally, the therapeutic effect of surgical monotherapy on some locally advanced EC patients is not satisfactory to clinicians [4,5]. Alternatively, neoadjuvant and radical therapies, such as chemotherapy, radiotherapy, or chemoradiotherapy (CRT), have been widely employed to improve the survival rate of EC patients [4,6,7].
Taxanes, platinum, and fluorouracil have long been recognized as important chemotherapeutic drugs in the treatment of EC [8,9]. Taxanes are mitotic inhibitors, which can restrain cell mitosis by promoting tubulin polymerization and inhibiting depolymerization so as to inhibit tumor growth. So far, there has been a wide range of cytotoxic effects on a variety of solid tumors [10]. Tissue culture studies have shown the ability of taxanes to block and/or prolong cells in the G2 or M phase of the cell cycle [11]. It can also induce sensitive cell apoptosis and reduce the consumption of oxygen in solid tumors and, subsequently, increase the local oxygen supply [12]. Fluorouracil antitumor drugs inhibit DNA synthesis by mediating thymine nucleotide synthase activity, which has a beneficial effect on solid tumors, such as gastrointestinal tumors [13]. Fluorouracil can also play a radiosensitizing role by altering the distribution of the cell cycle [14]. At present, CRT is more effective than chemotherapy or radiotherapy alone; it can improve the local control rate, long-term survival rate, and quality of life of EC patients [7,15]. The classical concurrent chemoradiotherapy regimens are those consisting of platinum combined with either fluorouracil or taxanes (paclitaxel or docetaxel) [8,16]. A previous study also indicated that different neoadjuvant chemoradiotherapy (nCRT) or definitive chemoradiotherapy (dCRT) regimens might have dissimilar therapeutic benefits on EC patients [16]. This systematic review and meta-analysis evaluate the difference in the efficacy and toxicity of fluoropyrimidine plus platinum (FP) and taxanes plus platinum (TP) regimens in EC patients undergoing nCRT or dCRT.

This review was performed in accordance with the Preferred Reporting Items for Systematic Reviews and Meta-Analyses (PRISMA) statement [17]. Screening and data extraction processes were conducted by two independent reviewers, and the differences were resolved by a third reviewer. Multiple electronic databases, including Pubmed, Embase, and Cochrane, were systematically searched to find all the available articles published before 22 March 2022. The keywords or MeSH headings referenced were “Esophageal Neoplasms”, “Esophageal Squamous Cell Carcinoma”, “Adenocarcinoma of Esophagus”, “Taxoids”, “Paclitaxel”, “Docetaxel”, “Fluorouracil”, “Capecitabine”, “S1”, and “Chemoradiotherapies”. It should be noted that only human studies in the English language were considered for inclusion.

According to the chemotherapy regimens used, EC patients were divided into two groups: TP and FP. They were further divided into two subgroups, namely, nCRT and dCRT groups, according to the subsequent surgical intervention. The outcomes measured were 3-year overall survival (OS) and 3-year progression-free survival (PFS). The ORR of the dCRT groups and the pCR and R0 resection of the nCRT groups were also included. The following data were extracted from the included articles: the first author, publication year, geographical region, pathological type, chemotherapy regimen, median radiotherapy dose, number of patients, treatment strategy, clinical stage, follow-up time, 3-year OS and PFS, ORR, pCR, R0 resection rate and grade 3 or above toxicity. When the 3-year OS and PFS were not directly provided in the article, they were extracted from the survival curve using Eagauge Digitizer software. The extracted data were sorted using standard tables. The quality of the RCTs was evaluated using the Cochrane risk bias evaluation tool. The evaluation results were divided into high bias risk, low bias risk, and unknown bias risk. Cohort studies or case-control studies were assessed with the Newcastle Ottawa scale. There were 9 stars in the article quality evaluation, and articles with 6 stars or more were retained.

RevMan 5.3 analysis software was used to statistically analyze the relevant outcome indicators. The summary measure was the risk ratio (RR) with a 95% confidence interval (95% CI) for 3-year OS and 3-year PFS, and p < 0.05 was considered statistically significant. Q tests and I2 tests were introduced to evaluate the heterogeneity of the results. According to relevant standards in the Cochrane Intervention System Evaluation Manual, the fixed-effect method was used if the heterogeneity was acceptable (I2 < 50%, p > 0.10). Once the heterogeneity was established (I2 ≥ 50% and p ≤ 0.10), a random effect model was performed. The sources of heterogeneity, such as methodological heterogeneity, statistical heterogeneity, and clinical heterogeneity, should be analyzed, and sensitivity analysis could be used to exclude a single study. The sensitivity analysis was carried out by Stata software version 14.0, and the risk of publication bias was determined using Begg’s tests and Egger’s tests. When p > 0.05, there was considered to be no publication bias. If the number of included articles was less than 10, no further bias test was required.

Five RCTs with a low risk of bias evaluated using the Cochrane risk bias were included in this study (Figure 2). The 26 cohort studies had a medium-to-high quality, as assessed by the Newcastle Ottawa scale.

3.3.1. TP Results in Better Disease Control and Long-Term Survival Compared with FP in the dCRT Group

The outcome indices for the 3-year OS, 3-year PFS, pCR, and R0 resection rate in dCRT and nCRT groups were analyzed (Figure 5). The p values of Begg’s tests and Egger’s tests were greater than 0.05, which suggested that there was no publication bias in this study (Table 2).

This study indicated that taxanes combined with platinum could produce superior clinical responses and survival benefits when compared with fluorouracil combined with platinum in EC patients treated with dCRT. Meanwhile, the two treatment regimens have equivalent survival benefits for EC patients undergoing nCRT. These findings might provide guidance for clinicians to choose appropriate treatment regimens for patients with esophageal cancer.

The following supporting information can be downloaded at: https://www.mdpi.com/article/10.3390/curroncol29090519/s1, Figure S1. Sensitivity analysis. (a) 3-year PFS in dCRT; (b) 3-year OS in nCRT; (c) 3-year PFS in nCRT; (d) thrombocytopenia in dCRT; (e) nausea/vomiting in dCRT. Table S1. Survival rate of 31 selected studies included in the systematic review and meta-analysis. 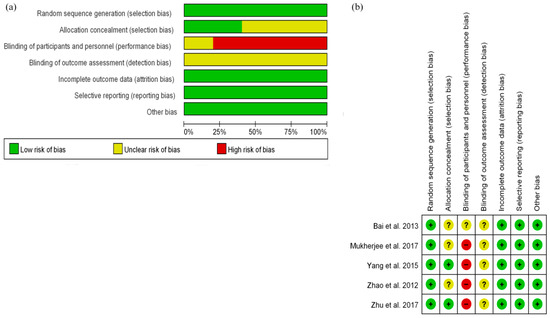 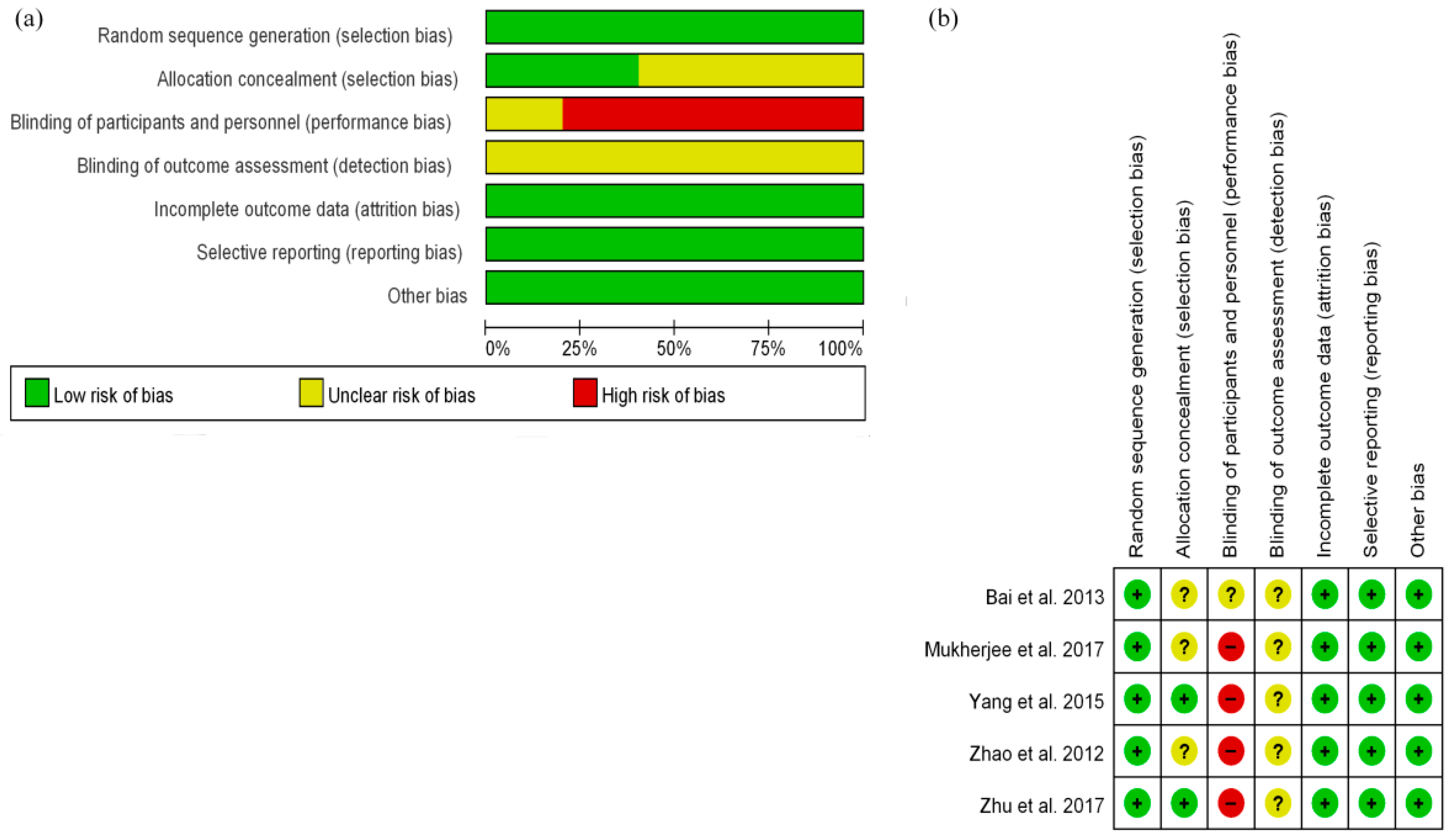 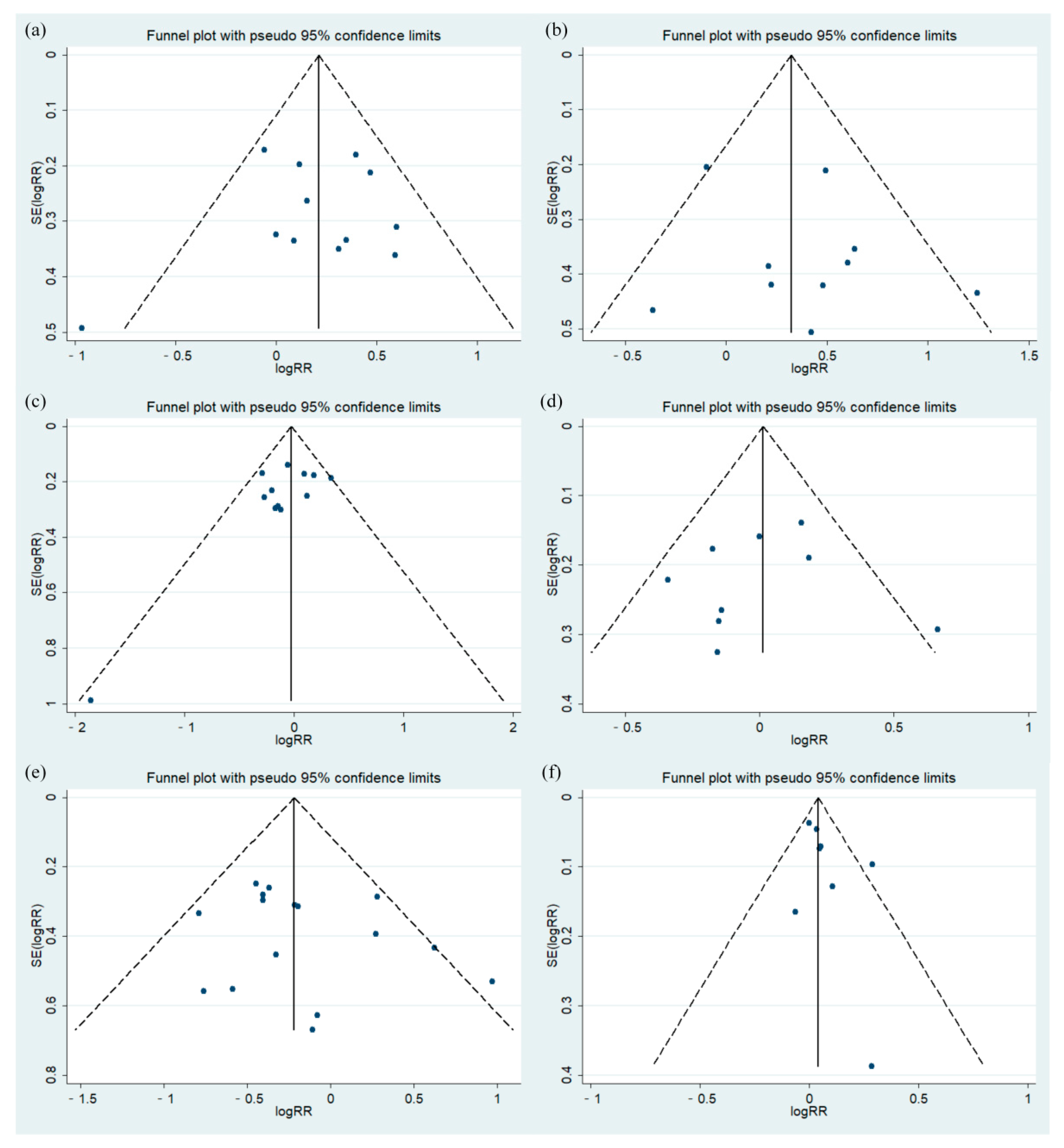 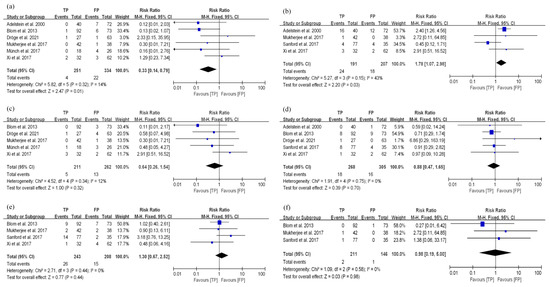 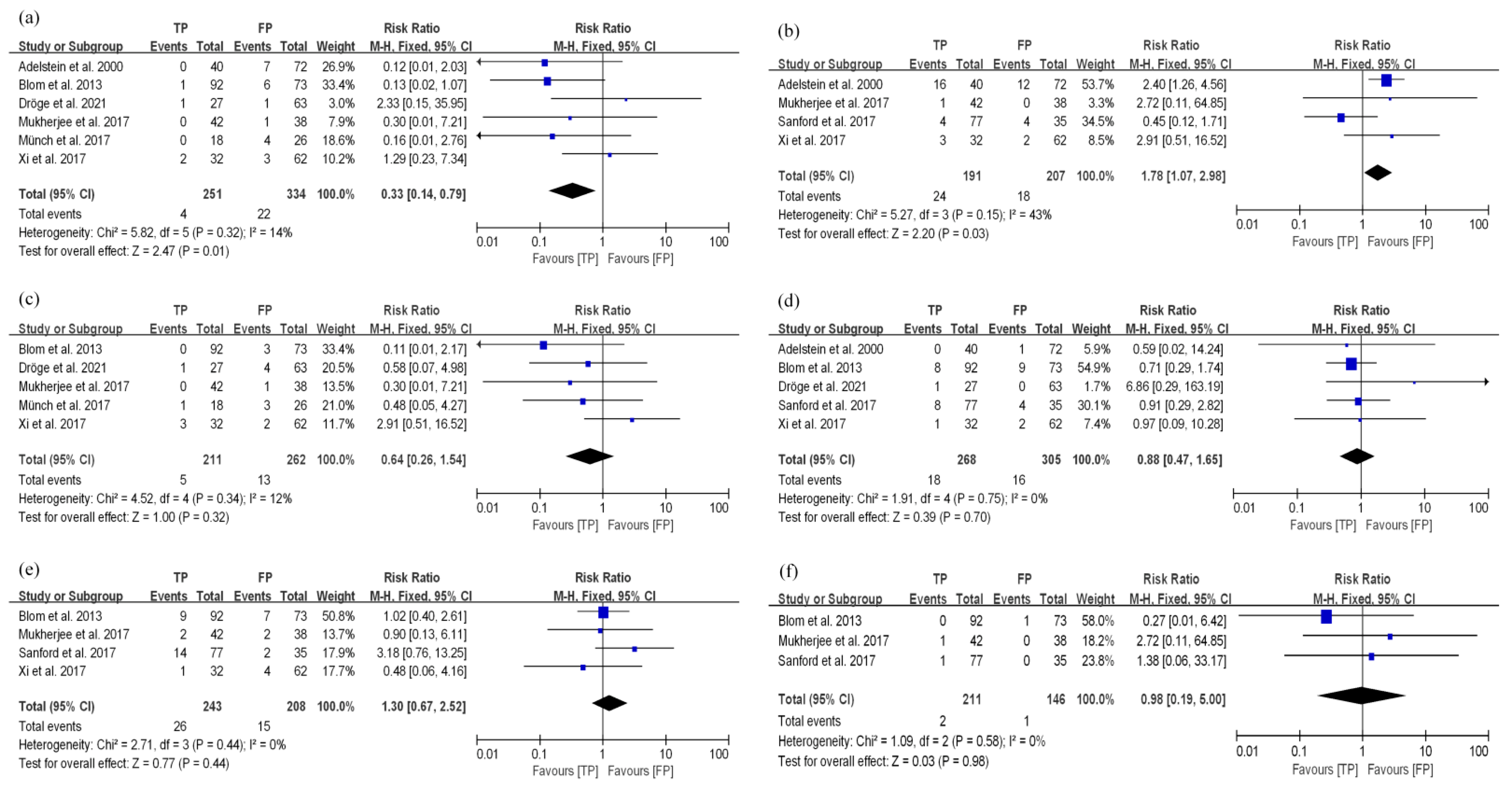 Table 2. Symmetry test of funnel plots.
Table 2. Symmetry test of funnel plots.
Abbreviations: OS, overall survival; pCR, pathologic complete response; PFS, progression free survival.
© 2022 by the authors. Licensee MDPI, Basel, Switzerland. This article is an open access article distributed under the terms and conditions of the Creative Commons Attribution (CC BY) license (https://creativecommons.org/licenses/by/4.0/).
We use cookies on our website to ensure you get the best experience. Read more about our cookies here.
Accept
We have just recently launched a new version of our website. Help us to further improve by taking part in this short 5 minute survey here. here.
Never show this again