There are limited patient-reported outcome (PRO) data tracking changes in toxicity in patients actively undergoing radiotherapy. Between 2015–2019, acute toxicity was prospectively measured in 698 patients undergoing a 5-week course of pelvic radiotherapy for gynecologic cancers using a weekly PRO questionnaire. Our questionnaire was able detect a pattern of onset and resolution of acute gastrointestinal (GI) and genitourinary (GU) toxicity in 27 out of 32 questions. Logistic regression analysis showed that increasing GI and GU toxicity at week 2 could predict for severe toxicity at week 5. However, due to a low number of severe events, univariate results could not be productively added to a multivariate model. We observed a >70% response rate for all sections of the questionnaire, except for questions on sexual and vaginal health, which had a 13% average response rate. By demonstrating that PRO data can be used to track acute toxicity during radiotherapy, there is a need to further examine how this tool may be implemented in the clinic to provide complex, adaptive care, such as early side effect management, and modifying radiation delivery in real-time.
Keywords: patient reported outcomes; acute toxicity; pelvic radiotherapy; gynecologic cancers patient reported outcomes; acute toxicity; pelvic radiotherapy; gynecologic cancers

The use of patient-reported outcome data (PRO) in the clinic has been shown to improve symptom detection, clinical management, and outcomes in oncology (e.g., symptom control, health-related quality of life) [1,2]. A recent randomized trial with patients undergoing chemotherapy for metastatic cancers has further suggested a possible survival benefit with PRO monitoring [3].
Comparatively, there have been fewer studies assessing the utilization and benefit of PROs in patients undergoing radiotherapy, despite often having extended treatment courses, and in contrast, being used more often as a primary modality with curative intent. The latter emphasizes the importance of utilizing PROs to reduce treatment interruptions and improve radiotherapy completion rates. PROs may aid in establishing thresholds at which to implement early supportive care measures, which may reduce downstream severe toxicity. There is also the potential to evaluate toxicity when introducing treatment modifications, such as changes in radiation dose-fractionation, or the inclusion of additional lymph node regions in treatment volumes.
In April 2015, six regional cancer centres across British Columbia began collecting PROs in patients undergoing radiotherapy for gynecologic cancers. This was conducted using a questionnaire composed of five validated questionnaire subsets focusing on bowel function, urinary function, abdominal problems, gynecological issues, and general health. While the feasibility of its implementation had been previously described, we sought to summarize and evaluate the initial patient responses with a particular focus on the ability of our questionnaire to track acute toxicity during radiotherapy [4].

We retrospectively evaluated PRO questionnaire responses from patients diagnosed with gynecologic cancers undergoing at least a 5-week course of pelvic radiotherapy at one of our six regional BC Cancer centres between April 2015 and May 2019. The survey was comprised of 49 questions derived from 5 independently validated questionnaire subsets [4]. These included EPIC Bowel/Urinary 2.0, PRO-CTCAE GI, EORTC QLQ CX24, and EuroQol EQ-5D-5L (questionnaire is shown in Supplementary Figure S1). The questionnaire was administered on a tablet device prior to first treatment (either at the time of CT simulation or new patient education session), 1–5 times at weekly intervals during radiotherapy (depending on the treatment centre), and at each subsequent follow-up visit. Depending on where the patient was being seen, the questionnaire was given out using a standardized script by either the radiation oncologist, radiation therapist, nurse, or volunteer. Laminated copies of the questionnaire and script were available at the CT simulator for each centre (e.g., in the event of a network connection loss or a patient who is unable to use a tablet). If the patient did not speak English, questionnaires could be completed with the assistance of an interpreter. Respondents had to have completed at least one survey in addition to the baseline survey to be included in the study. Our study was approved by the joint BC Cancer and University of British Columbia Research Ethics Board.
Questionnaire responses were summarized with descriptive statistics. Given the long survey length, questions 14 and 26 were assessed as screening questions for any GI or GU toxicity (respectively) as they showed the highest event rates. Logistic regression was subsequently performed on these summary questions to associate the likelihood of a week 5 score being equal to 4 (“big problem”) given the week 2 score, while controlling for the baseline score. Clinical charts were abstracted to determine patient demographics, disease sites, treatment modality, and RT prescription/technique. Univariate comparisons of these potential confounders were performed using the chi-square statistic. All tests were 2-sided, with p < 0.05 considered statistically significant. SPSS statistical software package, version 21.0 (Chicago, IL, USA) was used. We did not analyze Supplementary Materials (Supplementary Figure S1) on General Health, as our main objective was to assess trends in acute radiation toxicity.

A total of 1256 patients underwent a ≥25 fraction course of pelvic radiotherapy from March 2015 to May 2019, of which 698 completed a baseline and at least one follow-up questionnaire. The media age was 60 years (range 24–89). Of these patients, 50% and 33% had primary endometrial and cervical cancers, respectively. Approximately 58% were post-operative courses. Of the patients, 35% underwent concurrent chemotherapy, and 76% received between 45–50 Gy. Baseline patient and treatment characteristics are summarized in Table 1.
Mean question scores are shown in Table 2 and Figure 1a,b. Excluding questions on vaginal and sexual health, a pattern of onset and resolution of acute toxicity was detected in 27/32 questions. We defined this pattern as at least two successive increasing scores from baseline/week 1 during treatment, with improvement at the 6-week follow-up appointment compared to week 5. The exceptions were questions 15, 16, 18, 20, and 22—asking about urinary leakage and urinary bleeding. On the sub-analysis of mean scores based on primary tumor site, the questionnaire was similarly able to capture patterns of acute toxicity (endometrial 26/32, cervical 28/32, ovarian 29/32, vaginal 30/32, and vulvar 25/32 questions).
The sensitivity and specificity of the GI summary toxicity question was 69.2% and 93.2%. This was comparable to the GU summary toxicity question with 56.4% and 99.7%, respectively. If the definition of “no toxicity” for the GI summary question allowed a score of 0 or 1, the sensitivity increased further to 80.7% with a specificity of 73.7%. For the GU summary question, it was 78.8% and 83.4%, respectively. These results are summarized in Table 3.
A total of 695 patients were included in our predictive endpoint analysis. Of these, 384 responded to the GU summary question (question 26) both during weeks 2 and 5. Similarly, 377 responded to the GI summary question (question 14) during both those weeks. Only 6.3% of patients had a week 5 score of 4 (where toxicity is a “big problem”) for the GU summary question, and even less (1.9%) for the GI summary question.
Logistic regression showed that an increase in week 2 scores from baseline lead to an increased risk of week 5 scores being equal to 4 (controlled for baseline score; GU summary, OR = 2.2, 95% CI 1.48–3.42, p < 0.001; GI summary, OR = 2.2, 95% CI 1.04–4.80, p < 0.05). The low number of events (week 5 scores = 4) for both summary questions did not allow for the univariate results to be productively added to a multivariate model, though primary tumor site was found to be significant (p = 0.01) for GI toxicity. The results of the univariate analyses are shown in Table 4 and Table 5.
Question response rates across all domains decreased by approximately 21% by week 5 with an 8.4% increase at the 6-week follow-up appointment, with the exception of the questions on sexual and vaginal health. On average, only 13% responded to these questions at each time point. These results are shown in Figure 2.

This research was funded by POSI RT Research Catalyst Grant, grant number F18-02098. This did not cover publication costs.

The study was conducted in accordance with the Declaration of Helsinki and approved by the joint Institutional Review Board of the University of British Columbia and BC Cancer (protocol H22-00795, March 2022).

Patient consent was waived due to the retrospective and anonymized nature of the study.

R.O. has received grant funding from Varian Medical Systems. The funders had no role in the design of the study; in the collection, analyses, or interpretation of data; in the writing of the manuscript; or in the decision to publish the results. 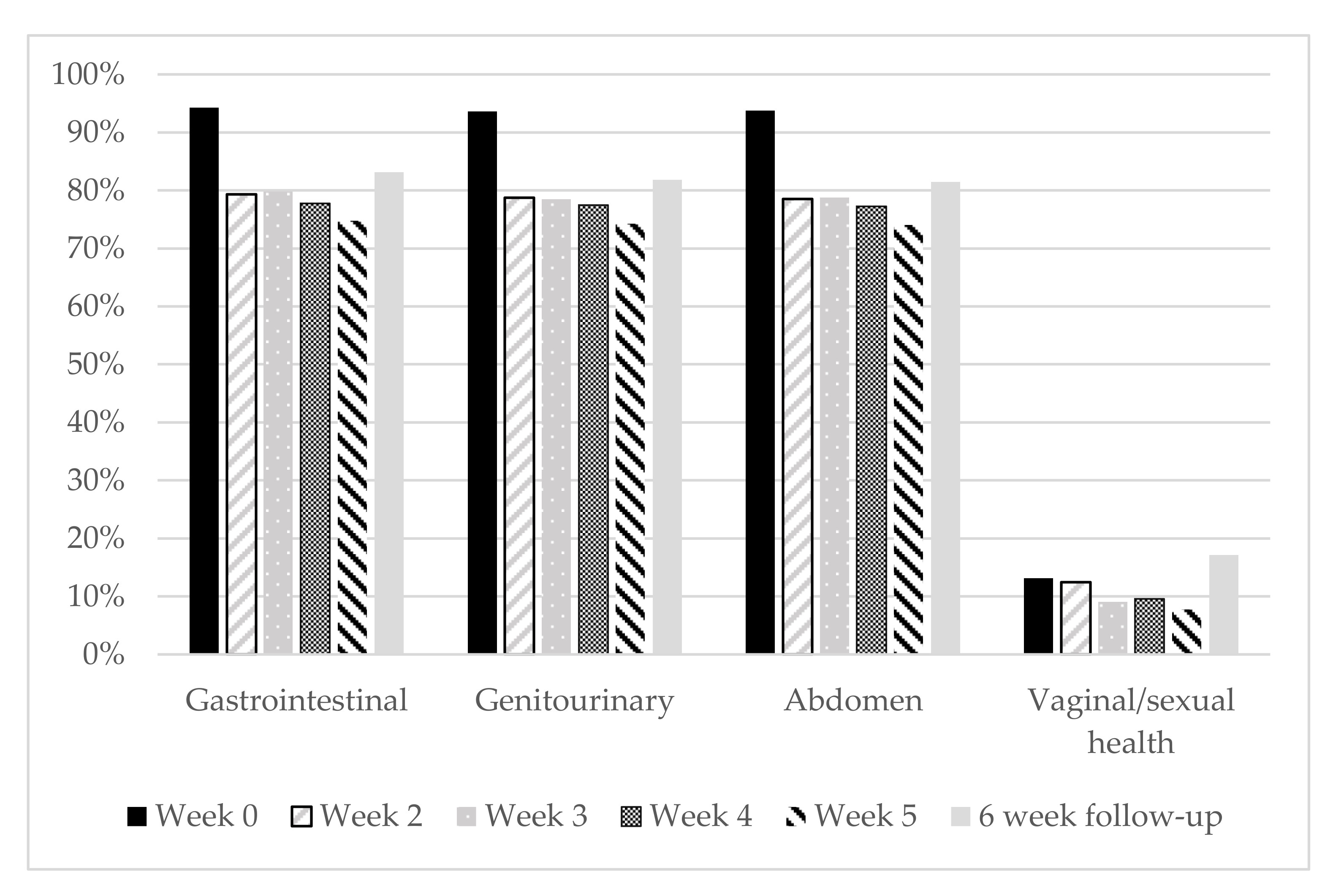