Geographic and Socioeconomic Disparity of Gastric Cancer Patients in Canada

Gastric cancer is the 5th most common malignancy worldwide, representing ~5–10% of all new cancer cases. Although its incidence is declining, it is estimated that 1 in 98 Canadians will develop gastric cancer in their lifetime. The epidemiology and distribution of gastric cancer throughout Canada, however, remains poorly understood. A retrospective analysis of demographic data across Canada between 1992 and 2010 was performed using 2 population-based cancer registries. The incidence of gastric cancer was examined at the levels of provinces, cities, and postal codes. In addition, 43,955 patients were diagnosed with gastric cancer in Canada between 1992 and 2010; 66% were male and the average age of diagnosis was 68.4 years. The age-adjusted incidence rate was 5.07 cases per 100,000 individuals per year. The incidence decreased over the study period by 30%. High incidence rates were identified in rural areas of Newfoundland and Labrador, New Brunswick, and Quebec. Our study found a significant association between gastric cancer incidence rates and lower socioeconomic status, as well as Hispanic ethnicity. This is the first study to provide a comprehensive analysis of the incidence of gastric carcinoma in Canada, identifying high-risk populations that may benefit from increased primary and secondary prevention.
Keywords: gastric cancer; gastric adenocarcinoma; geographic clustering; epidemiology; incidence in Canada gastric cancer; gastric adenocarcinoma; geographic clustering; epidemiology; incidence in Canada

It is estimated that 1 in ~98 Canadians will develop gastric cancer, usually adenocarcinoma, in their lifetime [1,2]. It is more common in older men [3]. Gastric cancer is the 5th most common and the 3rd most deadly malignancy worldwide and is associated with socioeconomic injustice [3,4]. Its incidence varies greatly worldwide with the highest age-standardized incidence rates (ASIR) in Asia and South America [3]. Furthermore, a strong racial disparity is seen with ASIR of 10.7 per 100,000 individuals-year in Caucasian men vs. 20.8 per 100,000 in men of Asian/Pacific origin in the US [5]. Low socioeconomic status (SES), tobacco smoking, obesity, a diet high in meat, salty and processed foods, and finally, H. pylori infection are strongly associated with gastric cancer development and mortality [2,3,5,6,7,8,9,10,11,12]. In particular, SES may be a predictive risk factor of gastric cancer incidence due to the underlying occupational and lifestyle exposures. A recent study of Surveillance Epidemiology and End Results (SEER) data between 2000 to 2014 in the United States found that gastric cancer incidence was ~30% higher in lowest SES neighborhoods, when contrasted with highest SES neighborhoods [13]. A study conducted in Italy in 2011 demonstrated that in nearly all regions, over 25% of deaths secondary to gastric cancer could have been avoided if the population with a low to medium education level had a mortality rate that matched that of the population with a higher education level [14].
In support of the global effort to study health disparities due to racial and socioeconomic factors [15,16], we focused on identifying the geographic distribution of gastric cancer incidence across Canadian provinces and territories and correlated incidence rates with ethnicity, SES, and other health determinants.

This study was conducted in accordance with the CISS-RDC-668035 and 13-SSH-MCG-3749-S001 protocols approved by the Social Sciences and Humanities Research Council of Canada (SSHRC) and the Quebec Inter-University Centre for Social Statistics (QICSS). An exemption from the McGill University Research Ethics Board review was obtained, in accordance with the institutional policy.

Data were obtained from the Canadian Cancer Registry (CCR) and Le Régistre Québécois du Cancer (LRQC). International Classification of Disease (ICD) for Oncology ICD-O-3 codes were used for 10 subtypes of gastric adenocarcinoma (Table 1) similar to our prior studies [17,18,19,20,21,22,23,24,25,26,27,28,29,30,31,32,33,34]. Cases of gastric cancer were defined as the following: Adenocarcinoma (8140), intestinal adenocarcinoma (8144), diffuse adenocarcinoma (8145), tubular adenocarcinonma (8211), papillary adenocarcinoma (8260), mucinous adenocarcinoma (8480), signet ring cell carcinoma (8490), medullary carcinoma (8512), adenosquamous carcinoma (8560), and undifferentiated carcinoma (8020).
The CCR includes all cancer cases for 12 provinces and territories (excluding Quebec), diagnosed between 1992 to 2013. LRQC contains Quebec data for years 1992 to 2010. Since data from the LRQC database for Quebec were only available up to 2010, we chose to limit the analysis for this study between 1992 and 2010, for consistency. These databases provide demographic, geographic, and clinical information including sex, year, and age at diagnosis, province/city/forward sortation area (FSA). In Canada, postal codes consist of letters and numbers (e.g., H3G 1A4), where the first 3 entries (FSA) define a region in the country, with more than 1600 FSAs across Canada. Rural FSAs were defined as per the classification used by the Canada Post, in which a “0” as the second character of the FSA indicates a rural region, while a second character of “1” through “9” corresponded to an urban area.

Incidence rates and 95% confidence intervals were calculated and reported overall, by year of diagnosis and specific geographic regions that were identified by the mapping analysis. CI were based on exact Poisson tests. Statistical significance was defined by 95% CI not overlapping with that of the national average 95% CI. The national age-standardized incidence rate for gastric cancer in Canada was calculated using the direct method with WHO 2000 to 2025 as the population standard. The age-standardized incidence rates by province, FSA, and per year were calculated using the indirect method. Incidence rates were plotted, and linear regression models were used to assess trends over time.

Geographic maps of Canada, indicating the place of residence of patients recorded by the CCR, LRQC, and CVS databases, were generated using the geographic information systems software (Tableau 10.3 from Tableau Software, Seattle, WA, USA). Shape files used to create the geographic maps were obtained from Statistics Canada. Only FSAs with populations of at least 5000 individuals based on the census data were selected in order to reduce the risk of false-positive hits that could inflate the incidence rate.

Since CCR/LRQC databases do not record data concerning ethnicity nor SES, these data were retrieved from the 2001 and 2006 Canadian Census of Population. The median income was used to represent SES. Each FSA was placed into 1 of 5 quintiles based on the percentage of the population that is of Hispanic ethnicity (Q1 to Q5). Q1-Hispanic contains the FSAs with the least percentage of Hispanic individuals and Q5-Hispanic contains those with the highest percentage. Quintiles were compared with one another via incidence rate ratios (IRR) and their corresponding 95% confidence intervals. In addition to the quintile analyses, FSAs with significantly higher incidence rates than the national average were placed in one group, and those with significantly lower incidence rates in another. The average percentage of Hispanic individuals for each group was calculated and compared using the student T-test. The differences were considered significant when the p-value < 0.05. East Asian ethnicity and SES were analyzed using the same method. The conclusions derived from this analysis should be interpreted with caution, given that SES and ethnicity data by FSA were not directly available.

While the incidence rates of gastric cancer are decreasing in Canada, incidence rates vary greatly on the geographic location favoring rural areas in Newfoundland and Labrador, New Brunswick, and Quebec. First-nation and highly multicultural (particularly Hispanic) communities were identified among high incidence regions. The association with low SES was confirmed. A total of 11 FSAs had an ASIR of gastric cancer >3-fold that of the national average. Since ~30% of gastric cancer cases are thought to be preventable, targeting high risk communities is of particular interest to improve disease burden and survival.

This work was supported by the Cole Foundation Grant to Litvinov, Canadian Foundation of Dermatology Foundation research grants to Sasseville and Litvinov and Fonds de recherche du Quebec—Santé (FRSQ #34753 and 36769) research grants to Litvinov. No funding bodies had any role in the study design, data collection and analysis, decision to publish or preparation of the manuscript.

The CISS-RDC-668035 and the 13-SSH-MCG-3749-S001 protocols were approved by the Social Sciences and Humanities Research Council of Canada (SSHRC) and the Québec Inter-University Center for Social Statistics (QICSS), respectively. As per the institution policy, this study was exempted by the Research Ethics Board of McGill University.

3rd Party Data. Restrictions apply to the availability of these data. Data was obtained from the Canadian Cancer Registry (CCR) and Le Registre Québécois du Cancer (LRQC) and are available from the authors with the permission of Statistics Canada.

The authors declare no competing financial interests. The authors report no conflict of interest. 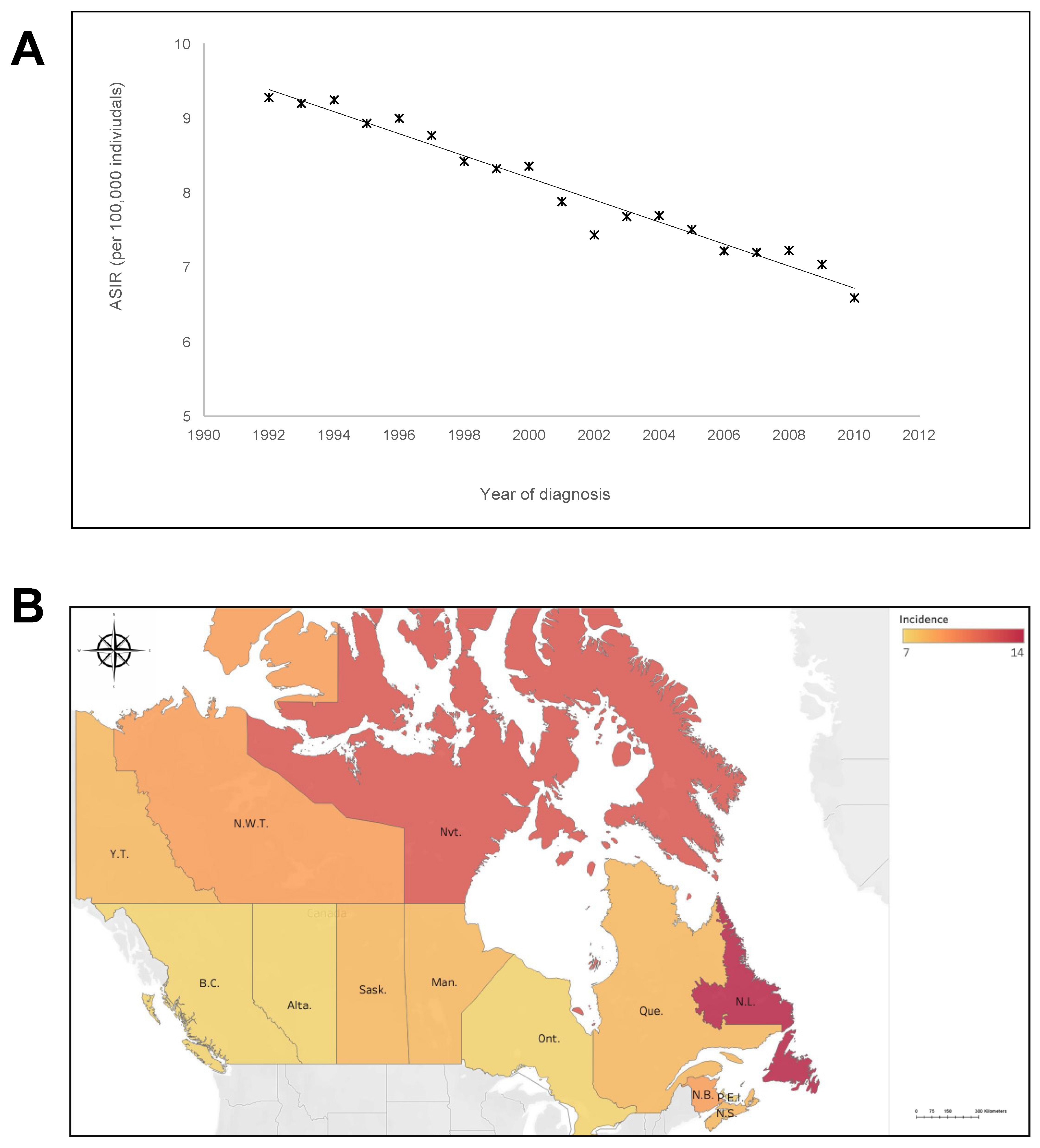 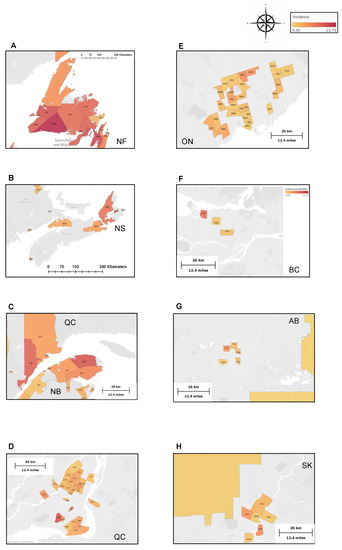