Assessment of Breast Cancer Surgery in Manitoba: A Descriptive Study

Background: Variation in breast cancer surgical practice patterns can lead to poor clinical outcomes. It is important to measure and reduce variation to ensure all women diagnosed with breast cancer receive equitable, high-quality care. A population-based assessment of the variation in breast cancer surgery treatment and quality has never been conducted in Manitoba. The objective of this study was to assess the variation in surgical treatment patterns, quality of care, and post-operative outcomes for women diagnosed with invasive breast cancer. Methods: This descriptive study used data from the Manitoba Cancer Registry, Hospital Discharge Abstracts Database, Medical Claims, Manitoba Health Insurance Registry, and Statistics Canada. The study included women in Manitoba aged 20+ and diagnosed with invasive breast cancer between 1 January 2010 and 31 December 2014. Results: Axillary lymph node dissection (ALND) for node-negative disease ranged from 11.8% to 33.3%, timeliness (surgery within 30 days of consult) ranged from 33.3% to 60.2%, and re-excision ranged from 14.7% to 24.6% between health authorities. Women who underwent breast-conserving surgery had the shortest median length of stay and women who underwent mastectomy with immediate reconstruction had the longest median length of stay. In-hospital post-operative complications were higher among women who received mastectomy with immediate reconstruction (9.9%). Conclusion: Variation in surgical treatment, quality, and outcomes exist in Manitoba. The findings from this study can be used to inform cancer service delivery planning, quality improvement efforts, and policy development. Influencing data-driven change at the health system level is paramount to ensuring Manitobans receive the highest quality of care.
Keywords: breast cancer; breast neoplasms; invasive carcinoma; surgical variation; surgical quality breast cancer; breast neoplasms; invasive carcinoma; surgical variation; surgical quality

Health care quality measurement has evolved into a routine part of health care planning and delivery. Quality is defined as “the degree to which health services for individuals and populations increase the likelihood of desired health outcomes and are consistent with current professional knowledge” [1]. High-quality care is effective, accessible, safe, patient-centered, equitable, and has the capacity to deliver appropriate services [2]. High-quality care leads to improved patient outcomes and better value for money [3]. However, providing high-quality care can be challenging due to growth in technology and new evidence. For example, research expenditure in Canada has increased steadily ($20 billion in 2000 to $34 billion in 2018) along with the number of randomized controlled trials (RCTs) worldwide (2756 RCTs in 2010 to 40,675 in 2019), which has led to a rapid generation of health care knowledge [4,5]. Unfortunately, health care systems can be slow to change and may not adopt new evidence in a timely manner. This may result in variation in practice and quality leading to suboptimal outcomes.
Variations in healthcare practice patterns have been studied for decades among multiple specialties [6,7]. Studies that have examined variation in breast cancer surgery found that treatment varies by institution [8,9], surgeon [9,10], and geographic location [11,12]. For example, the mastectomy rate in Canada ranged from 35% in Manitoba to 61% in Newfoundland and Labrador [13]. Variation in breast cancer surgery also exists within provinces with Ontario reporting that 42% of women living in the Erie St. Clair health region received a mastectomy with lymph node excision compared to 15% of women in Mississauga Halton health region [14]. Variation in breast cancer surgical quality has also been seen with regards to primary tumor management (e.g., positive margin rates) and axillary management (e.g., number of sentinel lymph nodes identified) by the surgeon and by the institution [15]. The reasons for the variation are multi-factorial and may include factors such as diagnostic practices, patient preference, patient health status, technology, local training programs, and financial incentives [16]. As a result of this variation, some patients can experience longer hospital stays, more readmissions, further treatments, increased outpatient visits, and permanent disability, leading to a poor patient experience and increased cost to the healthcare system [5,17,18]. Clearly, it is important to measure and reduce variation in surgery to ensure all women diagnosed with breast cancer receive equitable, high-quality care. In Manitoba, a population-based assessment of the variation in breast cancer surgery treatment and quality has never been conducted. The objective of this study was to assess the variation in surgical treatment patterns, quality of care, and post-operative outcomes for women diagnosed with invasive breast cancer.

A descriptive study design was used to address the objective stated above. The following data sources were used: Manitoba Cancer Registry (MCR), Hospital Discharge Abstracts Database, Medical Claims Database, Manitoba Health Insurance Registry, and Statistics Canada 2006 Census. The MCR is a population-based registry that is legally mandated to collect, classify, and maintain accurate, comprehensive information about cancer cases including diagnosis date, tumor type and location, stage, and treatment in the province of Manitoba. The MCR was used to identify women diagnosed with invasive breast cancer and to identify surgical procedures. The Medical Claims Database, maintained by Manitoba Health, Seniors and Active Living (MHSAL), is generated by claims filed by health care providers for reimbursement of services and includes services provided, diagnosis, provider, and service date and was used to identify surgical consult dates. The Hospital Discharge Abstracts Database includes all hospital admissions for Manitoba residents and was used to identify surgical procedures, in-hospital complications, and length of stay. The Manitoba Health Insurance Registry contains individual and family-level information including demographic, vital status, and migration information. The Manitoba Health Insurance Registry was used to refine the cohort by ensuring all individuals were eligible for health care coverage and lived in the province during the study period. The 2006 Census data contains information about area-level average household income based on each individual’s area of residence and was used to stratify results by income quintile. All Manitoba residents have been assigned a personal health identification number which was used to link the provincial health information databases.

Surgical treatment patterns in Manitoba were identified by calculating the percentage of women who underwent surgery by age group, income quintile, type of surgery, health authority of residence, health authority of surgery, and stage. A literature review was conducted to identify indicators associated with high-quality breast cancer treatment. Final indicators were determined by an expert review led by surgical oncologists specializing in breast cancer treatment. Quality of care was measured using the following indicators: the percentage of women who underwent surgery within 30 days of surgical consult, the percentage of women who underwent a re-excision, and the percentage of women with axillary lymph node dissection for pathologically node-negative disease. In this study, patients who received neoadjuvant chemotherapy were excluded and those who had an axillary dissection following a sentinel lymph node biopsy were not considered to have a negative axillary dissection for the purposes of this analysis. Patients were also excluded if they had stage IV disease. Post-operative outcomes were determined by measuring in-hospital post-operative complications and length of stay.

From 2010 to 2014, 3962 women in Manitoba were diagnosed with invasive breast cancer. The age-standardized incidence rate was 165 per 100,000. The median age was 63 (interquartile range [IQR] = 53–73). Among the women who underwent surgery, the majority were under age 70 (69.8%) (Table 1). In both urban and rural settings, women who lived in areas with higher income quintiles had a higher percentage of surgery. The majority of women who underwent surgery lived in the urban RHA (regional health authority) (60.3%) and were diagnosed at stage l or ll (84.3%).

In conclusion, we have identified variations in practice patterns, quality of care, and post-operative outcomes for breast cancer surgery in Manitoba. Further research is needed to determine the reasons for the identified variations. Quality improvement initiatives, such as further training and audit and feedback reports, can be implemented to reduce variation and improve the quality of care and are being actively pursued by team members.

This project received funding from the Canadian Partnership Against Cancer, Agreement Number 12128.

Patient consent was waived since the study used a population-based administrative data source. 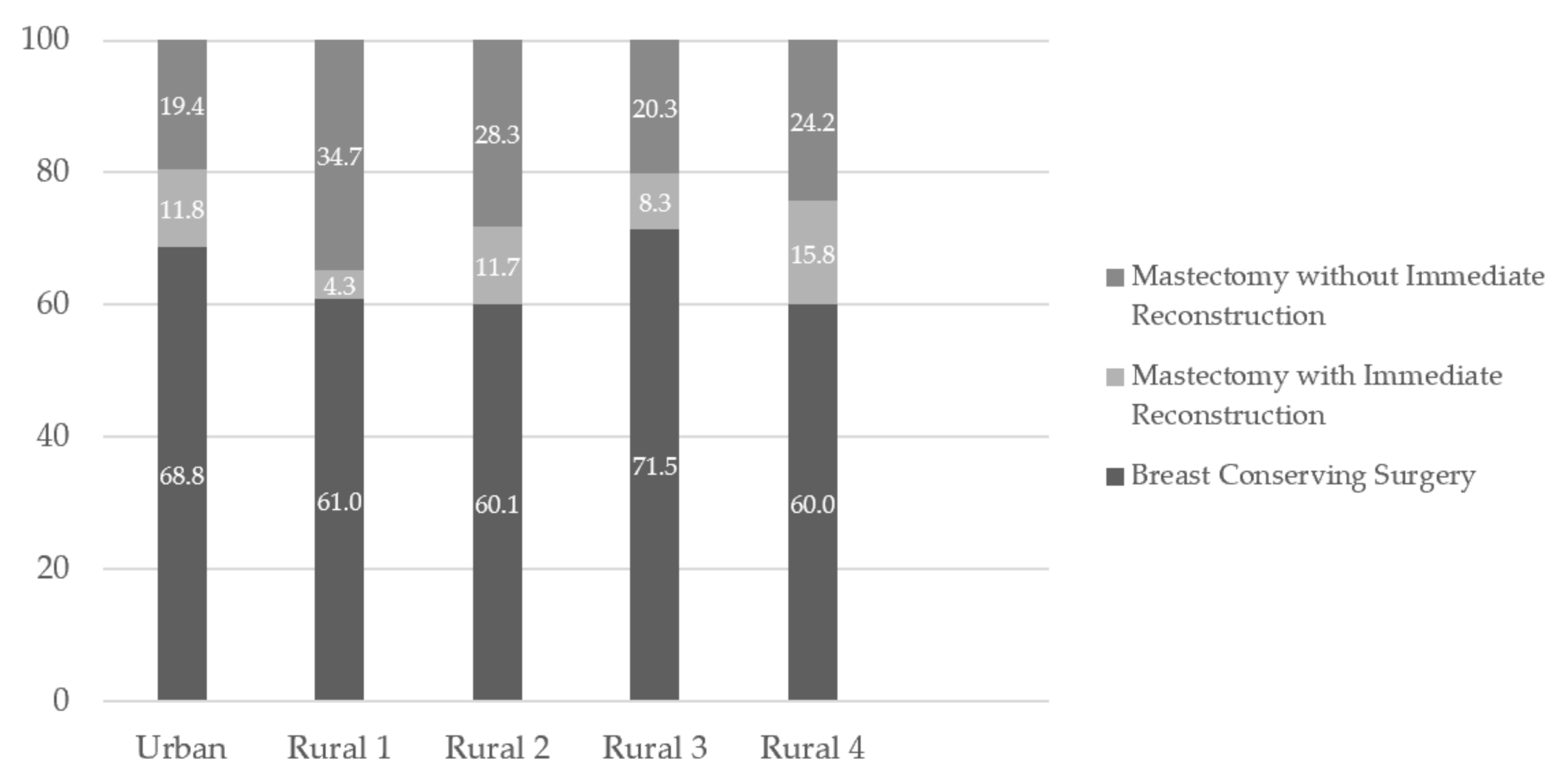