Estimating Need for Glasses and Hearing Aids in The Gambia: Results from a National Survey and Comparison of Clinical Impairment and Self-Report Assessment Approaches

A Descriptive Analysis of Transitions from Smoking to Electronic Nicotine Delivery System (ENDS) Use: A Daily Diary Investigation

Objectives: We aimed to examine patterns in smoking and electronic nicotine delivery system (ENDS) use over an extended period of time (up to 20 weeks) in people who smoked and who had never previously made a successful quit attempt using an ENDS. Design and setting: We conducted a longitudinal mixed-methods study in Dunedin, New Zealand, during 2018 and 2019. Participants: Purposively selected participants (N = 45; age (≥18 years), gender, ethnicities, cigarettes/day) who wished to quit smoking. Interventions: Participants were provided with a second-generation ENDS device (vape pen or starter “tank” device) at the start of their quit attempt, and asked to complete smartphone-based daily diary surveys assessing smoking and ENDS use. Outcome measures: Sunburst plots and a sequence plot were used to describe weekly and daily patterns of smoking and ENDS use (smoking only, ENDS use only, dual use, abstinent). Results: The most frequently reported movements among participants, classified according to their study week behaviour, occurred between dual use and exclusive ENDS use (and vice versa). A smaller group reported moving from dual use to exclusive smoking (and often back to dual use), and a small number reported moving between abstinence and different ENDS and smoked tobacco usage behaviours. Data visualisations focussing on those participants who had provided data during each of weeks 9–12 indicate that only a minority reported sustained dual use; instead, most participants indicated varied smoked tobacco and ENDS use, which included periods of dual use. Conclusions: The considerable variety observed within and between study participants suggests that high variability is typical rather than exceptional. Transitions from smoking to ENDS use may involve considerable periods of dual use, which is likely to be dynamic and potentially sustained over several months. View Full-Text
Keywords: electronic nicotine delivery systems; e-cigarettes; dual use; daily diary electronic nicotine delivery systems; e-cigarettes; dual use; daily diary
►▼ Show Figures 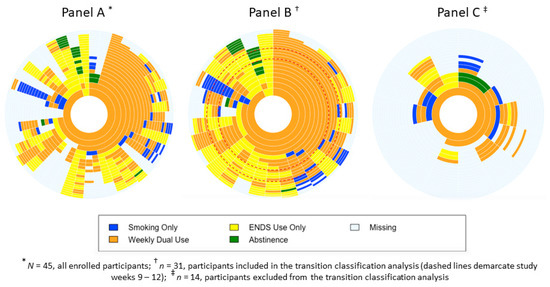