The aim of the study is to describe personality profiles and determinants of success in sports in relation to the Big Five Personality Model. In order to achieve this aim, personality profiles of players from various sports disciplines was set against the personality profile of champions—players who are considerably successful in sports competitions. Subsequently, an attempt was made to determine which personality traits significantly determine belonging to the group of champions—and therefore determine success in sport. The participants were men aged between 20 and 29 from the Polish population of sportsmen. A total of 1260 athletes were tested, out of whom 118 were qualified to the champions sample—those athletes had significant sports achievements. The research used the NEO-FFI Personality Questionnaire. Basic descriptive statistics, a series of Student’s t-tests for independent samples using the bootstrapping method, as well as a logistic regression model were performed. In relation to other athletes, champions were characterized by a lower level of neuroticism and a higher level of extraversion, openness to experience, agreeableness, and conscientiousness. An important personality determinant was neuroticism: the lower the level of neuroticism, the greater the probability of an athlete being classified as a champion. There are differences between champions and other athletes in all personality dimensions in terms of the Big Five. Based on the result of the research, it can be stated that personality differences should be seen as a consequence of athletes’ success, rather than as a reason for athletes’ success, based on their age between 20 and 29. View Full-Text
Keywords: sport psychology; personality; neuroticism; champions sport psychology; personality; neuroticism; champions
►▼ Show Figures 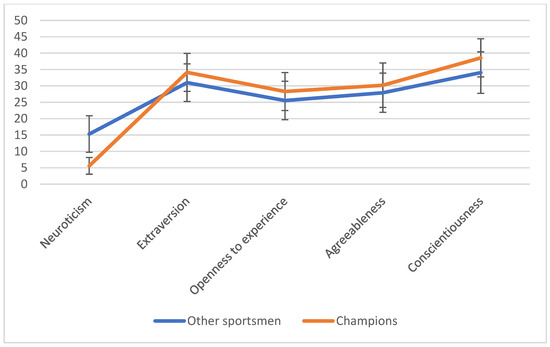