Mesothelioma in Agriculture in Lombardy, Italy: An Unrecognized Risk
Previous Article in Journal

Patterns of Red and Processed Meat Consumption across North America: A Nationally Representative Cross-Sectional Comparison of Dietary Recalls from Canada, Mexico, and the United States

High levels of both unprocessed red and processed meat have been associated with elevated risk for colorectal, stomach, and pancreatic cancers, with the strongest evidence for processed meat [1]. High intake of these foods is also associated with obesity [2], diabetes [3], and heart disease [3]. In addition to health concerns, red meat production is a major source of greenhouse gas emissions, deforestation, and water usage [4]. In light of both the health and environmental impacts of red and processed meat consumption, recent public health recommendations have called for individuals to reduce or eliminate intake of these foods [5,6].
Policies and trade agreements such as the North American Free Trade Agreement (NAFTA) and its successor, the US–Mexico–Canada Agreement (USMCA), encourage high production, trade, and ultimately consumption of many food products, including red and processed meat [7,8]. Indeed, market data indicate that purchases of red and processed meat are above the global average of 29 g/capita/day in all three North American countries [9].
On the other hand, policy strategies can be used to discourage consumption of food groups of concern. For example, taxes have been successfully used to reduce purchases of sugar-sweetened beverages in over 35 countries, including Mexico, as well as in several US cities [10]. Responses to public policy interventions such as food and beverage taxes differ by socioeconomic status and importantly, such policies are most effective among the highest consumers [11,12]. While information on dietary intake of meat is available in the US [13] and Mexico [14] or as a contributor to nutrient intake in Canada [15], no studies have specifically examined patterns of red and processed meat consumption across these North American countries using a common methodology. Previous multi-country comparative studies are limited by their use of commodity data from Food Balance Sheets [16], but such data do not identify top consumers, nor correlate well with actual consumption [16]. Understanding the patterns of red and processed meat intake at the individual level can be used to identify the highest consumers and inform policy. The objectives of this study were to use nationally-representative 24-h dietary recall data from Canada, Mexico, and the US to compare and contrast sociodemographic correlates of red and processed meat consumption throughout North America. It was hypothesized that meat intake would be higher in Canada and the US than in Mexico, and that it would be higher for men than for women in all three countries. Additionally, it was hypothesized that education would be a stronger correlate of meat intake in Canada and the US, while wealth would be more strongly correlated with meat intake in Mexico.

The Canadian Community Health Survey (CCHS)-Nutrition focus was most recently administered in 2015 [17]. CCHS-Nutrition used a three-stage sampling design to establish a representative sample of the civilian, non-institutionalized population in all provinces, except Prince Edward Island. The sample excluded residents of the Territories, reserves, and other Aboriginal settlements. To account for seasonality, selected clusters in each province were randomized to one of six two-month data collection periods. Face-to-face interviews were administered in participants’ homes. Cross-sectional data were from 14,083 participants aged 18 years or older with one day of valid dietary intake data. More detailed information on recruitment, sample design, and accounting for missing or invalid data is available in Supplementary File 2.

The Mexican National Health and Nutrition Survey (Spanish acronym, ENSANUT) was administered by the National Institute for Public Health (INSP) from May to October 2016 [18]. ENSANUT used a multi-stage probability design to sample the civilian, non-institutionalized population of Mexico. Face-to-face interviews with demographic, socioeconomic, dietary, and health-related questions were conducted in participants’ homes. Cross-sectional data were from 1581 participants aged 18 years or older with one day of valid dietary intake data. More detailed information on recruitment, sample design, and accounting for missing or invalid data is available in Supplementary File 2.

The US National Health and Nutrition Examination Survey (NHANES) is a repeated cross-sectional survey that uses multistage probability design to sample the civilian, non-institutionalized population residing in the 50 states and District of Columbia [19]. Data were collected in the southern US from 1 November to 30 April and in the northern regions from 1 May to 31 October. Face-to-face demographic and socioeconomic interviews were conducted in participants’ homes. Face-to-face dietary and health-related questionnaires were administered in a private room in the Mobile Examination Center. Data were from 10,497 participants aged 18 years or older who participated in either the 2013–2014 or the 2015–2016 NHANES cycle and who had one day of valid dietary intake data according to the National Center of Health Statistics. More detailed information on recruitment, sample design, and accounting for missing or invalid data is available in Supplementary File 2.

2.2. Dietary Recalls and Intake of Red and Processed Meat

For each survey, trained interviewers used the US Department of Agriculture (USDA) Automated Multiple Pass Method to gather 24-h dietary recall data on individual food intake, as described elsewhere [20]. Participants were asked to recall all foods and beverages they consumed the previous day. Measuring guides were used to assist with approximating the portion sizes of consumed foods. Thus, the reported dietary intake across countries is directly comparable. For CCHS and ENSANUT, the Automated Multiple Pass Method was applied accounting for the country-specific context (e.g., the list of commonly forgotten foods was adapted and differences in food availability and preparations were considered) [17,18].
The 24-h dietary recall data from the US and Canada were merged with the USDA Food Patterns Equivalent Database, which disaggregates mixed dishes into their component ingredients’ gram weights using standard recipes [21,22]. For Mexico, a standard recipe file created by INSP was applied to mixed dishes. In addition to gram weights of meat intake, the recipe files were also used to calculate single-day energy intake by summing kilocalories for every food and beverage item reported.
The same, standardized definition was applied across countries to identify unprocessed red meat (defined as mammalian muscle meat, e.g., beef, veal, pork, lamb, mutton, and goat) and processed meat (defined as all meats that have been salted, cured, fermented, smoked, or otherwise processed for preservation and flavor enhancement). The probability of consumption (i.e., proportion of consumers) and the amount consumed (g/day) among consumers of (1) unprocessed red meat; (2) processed meat; and (3) total red and processed meat was estimated. Amount consumed (g/day) was estimated using cooked weight.

Due to insufficient data on household income, and because income is not considered a reliable measure of financial assets in middle-income countries [23], a wealth index was used in Mexico. Principal component analysis was used to create a wealth index using information on household dwelling characteristics, basic services, and material goods. This index was used to classify participants into low, medium, and high wealth categories. Household size was defined as the total number of persons that lived in the dwelling and was included as a variable in regression analyses since a measure of per-capita income was not available. Education was classified as low (primary school or less), middle (more than primary but less than high school), and high (high school or higher).

The Poverty Income Ratio (PIR), a measure of family income relative to the Federal Poverty Level that takes into account household size, was used to create wealth categories. Family income was categorized as low (PIR 0–130%), middle (PIR 131–399%), and high (PIR ≥ 400%). Education was classified as low (high school equivalent or lower), middle (some college), and high (college degree or higher).

All analyses accounted for complex survey design and were performed using Stata 15 (StataCorp LLC, College Station, TX, USA). Descriptive statistics were used to determine the percentage of consumers and median consumption among meat-consumers. Rao-Scott chi-square tests were used to compare the proportion of meat consumers between countries. Somer’s D was used to test for differences in unadjusted median intake of unprocessed red, processed, and total meat between countries.
In analyses of sociodemographic characteristics, multivariate negative binomial regression was used to estimate the adjusted predicted probability of consuming red, processed, and total meat by sex, age (10-year categories), educational attainment, and household income and wealth. For analyses of ENSANUT only, we further adjusted for household size in order to account for sharing of wealth across household members. Stata’s postestimation margins command, dydx option was used to compare likelihood of meat consumption by sociodemographic characteristics. Generalized linear models were used to estimate the multivariate adjusted mean consumption of unprocessed red, processed, and total meat among consumers only, overall and within levels of the aforementioned covariates. In sensitivity analyses, we further adjusted for total energy intake in kilocalories. All sociodemographic analyses were stratified by country.

This is the first study to compare individual-level predictors of red and processed meat intake across North America. Consumption of red and processed meat is high in all three countries. Policy solutions are urgently needed to promote public health and improve the sustainability of diets. Taxes are effective tools to reduce intake of sugar-sweetened beverages and junk foods, and could also be used to target intake of red and processed meats [37]. Efforts to increase consumer awareness about the negative health and environmental impacts of meat, such as warning labels, also have the potential to shift behavior [38]. Redirection of meat subsidies towards more sustainable and nutritious crops, such as fruits, vegetables, and legumes, could shift incentives to favor healthier alternatives [38]. National dietary guidelines can also play a role. Canada’s Dietary Guidelines encourage individuals to consider the health and environmental impact of their food choices [5]. Both the Canadian and Mexican dietary guidelines recommend consuming plant-based sources of proteins wherever possible [5,24]. The US DGA are currently being updated, but the US federal government has, for the first time, restricted the science that can be considered in the guidelines, specifically prohibiting consideration of environmental impacts [39]. Aligning national dietary guidelines and trade policies with scientific evidence could bolster—rather than hinder—public health efforts across the continent.

This study received a determination of “Not Human Subjects Research” from the Institutional Review Board of the University of North Carolina at Chapel Hill (protocol 19-1707). 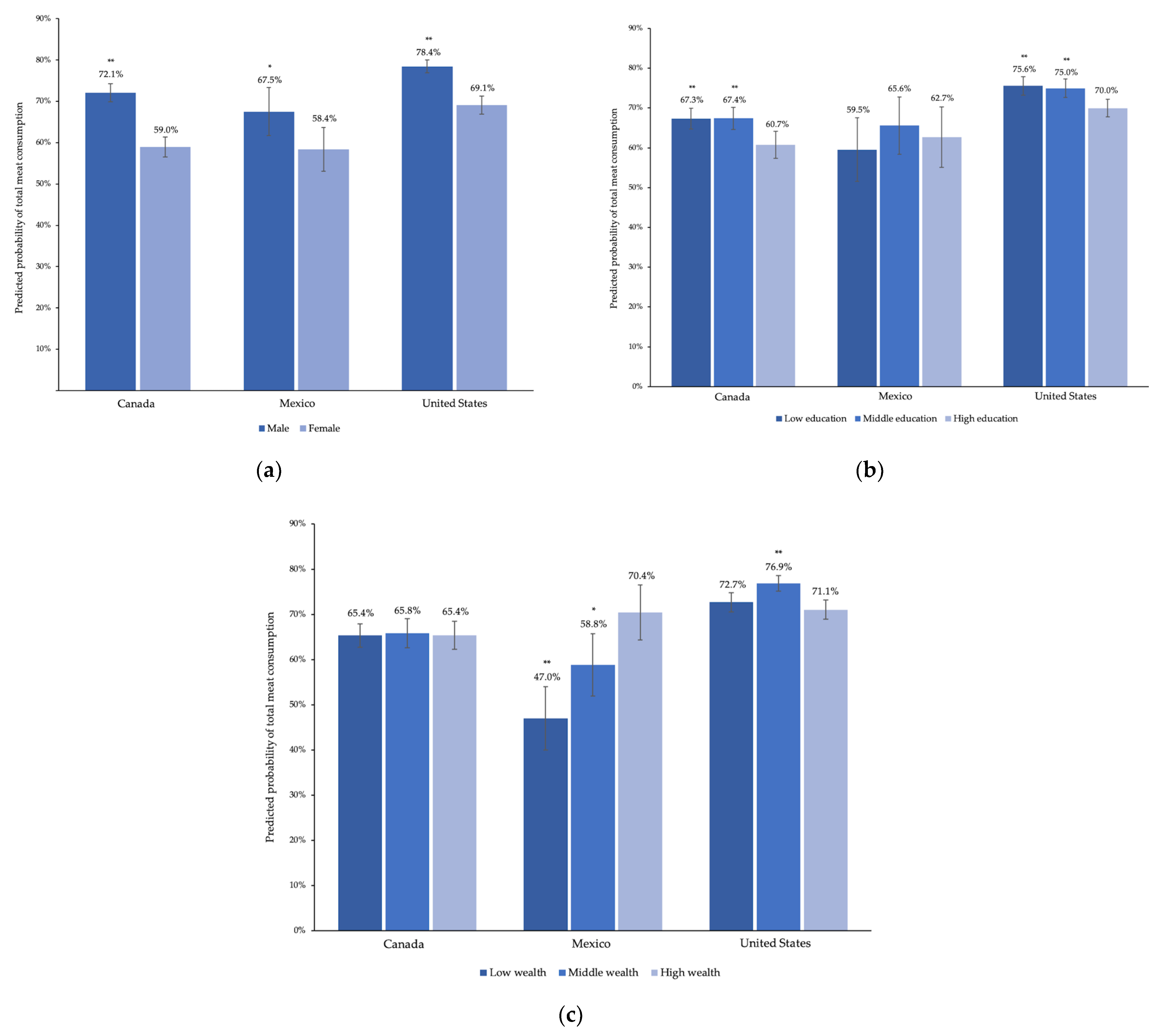 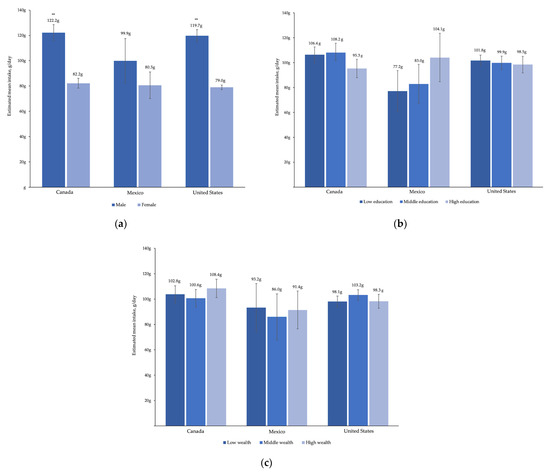 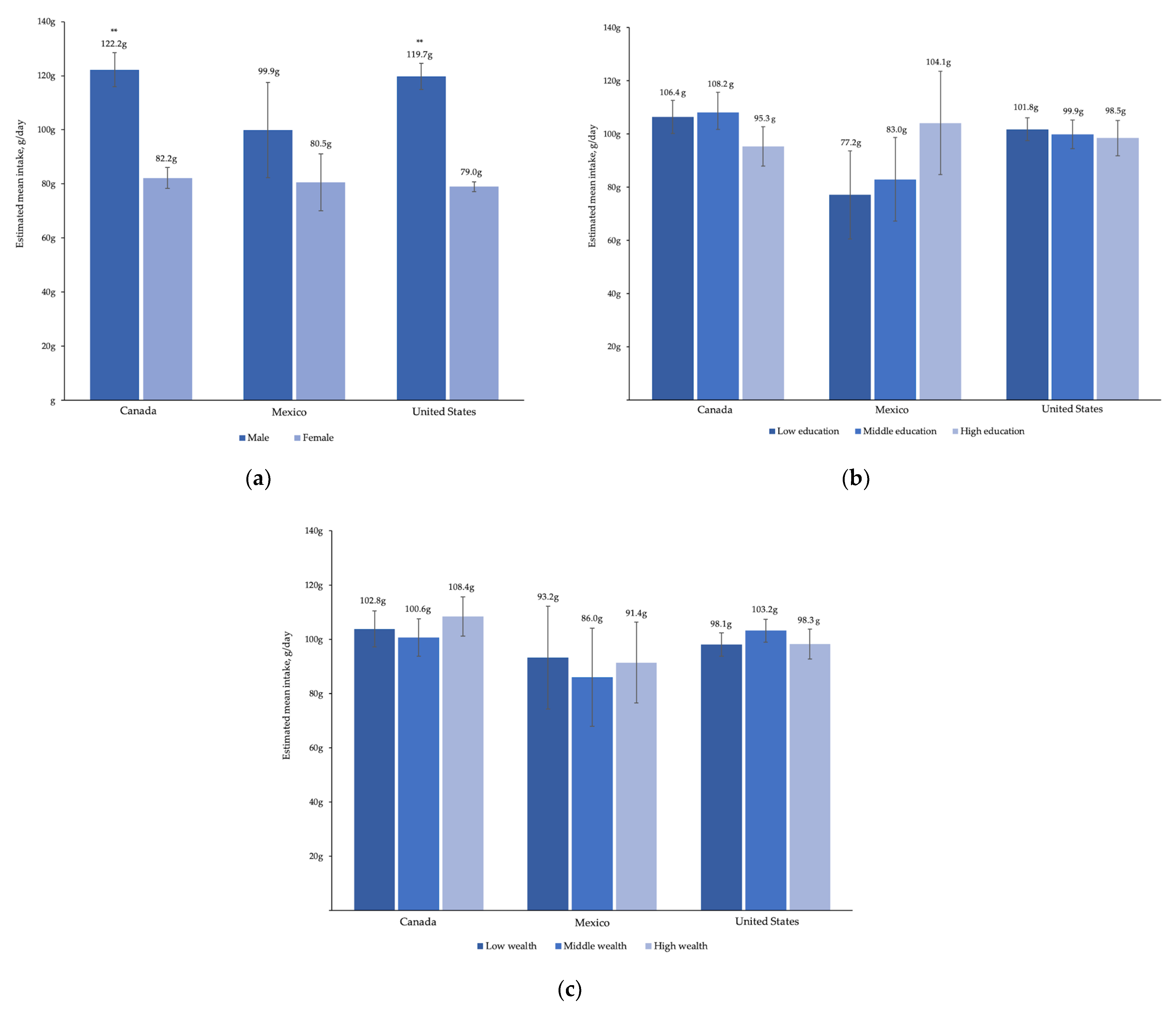