A Marketing Approach to a Psychological Problem: Problematic Smartphone Use on Adolescents

In total, 466 children and adolescents between 10 and 17 years (M = 13.05, SD = 1.99) took part in the current study. Of these, 239 were female and 227 were male. The frequency of individual ages was as follows: 10.5% (49 participants) were 10 years old, 18.2% (85) 11 years, 12.2% (57) 12 years, 18.9% (88) 13 years, 13.1% (61) 14 years, 11.4% (53) 15 years, 13.5% (63) 16 years, and 2.2% (10) 17 years. The modal value and the median are both 13 years. Of all participants, 85 stated that they used the Internet actively up to one hour a day, 186 between two and three hours, 105 participants four to five hours, 79 more than five hours a day, and 11 did not report their daily Internet usage time. All participants used at least one social media application including social networking sites, instant messaging services, and photo/video sharing platforms. The most frequently mentioned app was WhatsApp (used by 99.4% of all participants), followed by Instagram (55.4%) and Snapchat (55.2%). Facebook was used by 18.7% of all participants, the Facebook Messenger by 12.9% and Twitter by 15.7%. Besides, 37.1% of the participants mentioned that they used further services, for example Musical.ly (now known as TikTok), YouTube, or Threema. Of all 466 participants, 463 stated to have either their own or a shared smartphone and/or computer. Another three participants reported to not have their own or a shared device but stated that they used at least one social media application. Since the usage of specific applications is the more relevant condition, we decided to include these three participants as well.
The current sample was recruited in 2017 at a local secondary school in a large city in Western Germany within a period of two weeks. Parents and legal guardians gave their informed consent before children and adolescents voluntarily took part. All persons involved (including parents/legal guardians, teaching staff, school administration, and pupils) were informed about the purpose of the study and participants were surveyed in the school premises. The processing of all questionnaires (including those that are not relevant for the current manuscript) took about 40 to 60 min. The study was conducted in accordance with the Declaration of Helsinki and was approved by the local ethics committee of the University of Duisburg-Essen (date: 21st March, 2017).

The extent of participants’ need to belong was assessed by applying the Single-Item Need to Belong Scale by Nichols and Webster [41], to which a good reliability and validity is attributed. Here, participants are asked to rate from 1 = “disagree” to 4 = “agree” to what extent the statement “I have a strong need to belong” applies to them. Thus, higher scores indicate a higher need to belong.

To measure online self-regulative competences we used the Internet Literacy Questionnaire developed by Stodt and colleagues [42]. The scale assesses four dimensions of individuals’ competences in using the Internet in an adequate way, namely technical expertise, reflection and critical analysis, production and interaction, and self-regulation. The subscale self-regulation consists of five items, which are answered on a 6-point Likert scale ranging from 0 = “strongly disagree” to 5 = “strongly agree”. For the purpose of this manuscript, we only used the subscale self-regulation with an internal consistency of α = 0.752. A mean score was used to test the hypothesis.

We used SPSS 24.0 for Windows [43] for the statistical analyses. To test for bivariate correlations, we calculated Pearson’s correlations, with |r| ≥ 0.10 indicating a small, |r| ≥ 0.30 a medium, and |r| ≥ 0.50 a large effect [44]. To test our hypothesis, we calculated a hierarchical moderated regression analysis with age as first predictor, need to belong in the second step, and online self-regulative competences in the third step, followed by the respective interactions and the three-way interaction in the last step. All independent variables were Fisher’s z-transformed beforehand. Here, standardized beta-coefficients serve as measure of the effect sizes (with similar indicators for a small, medium, and large effect as for correlations). Simple Slopes analyses are calculated for significant three-way interactions.

We acknowledge support by the Open Access Publication Fund of the University of Duisburg-Essen. No further external funding was received for this research. 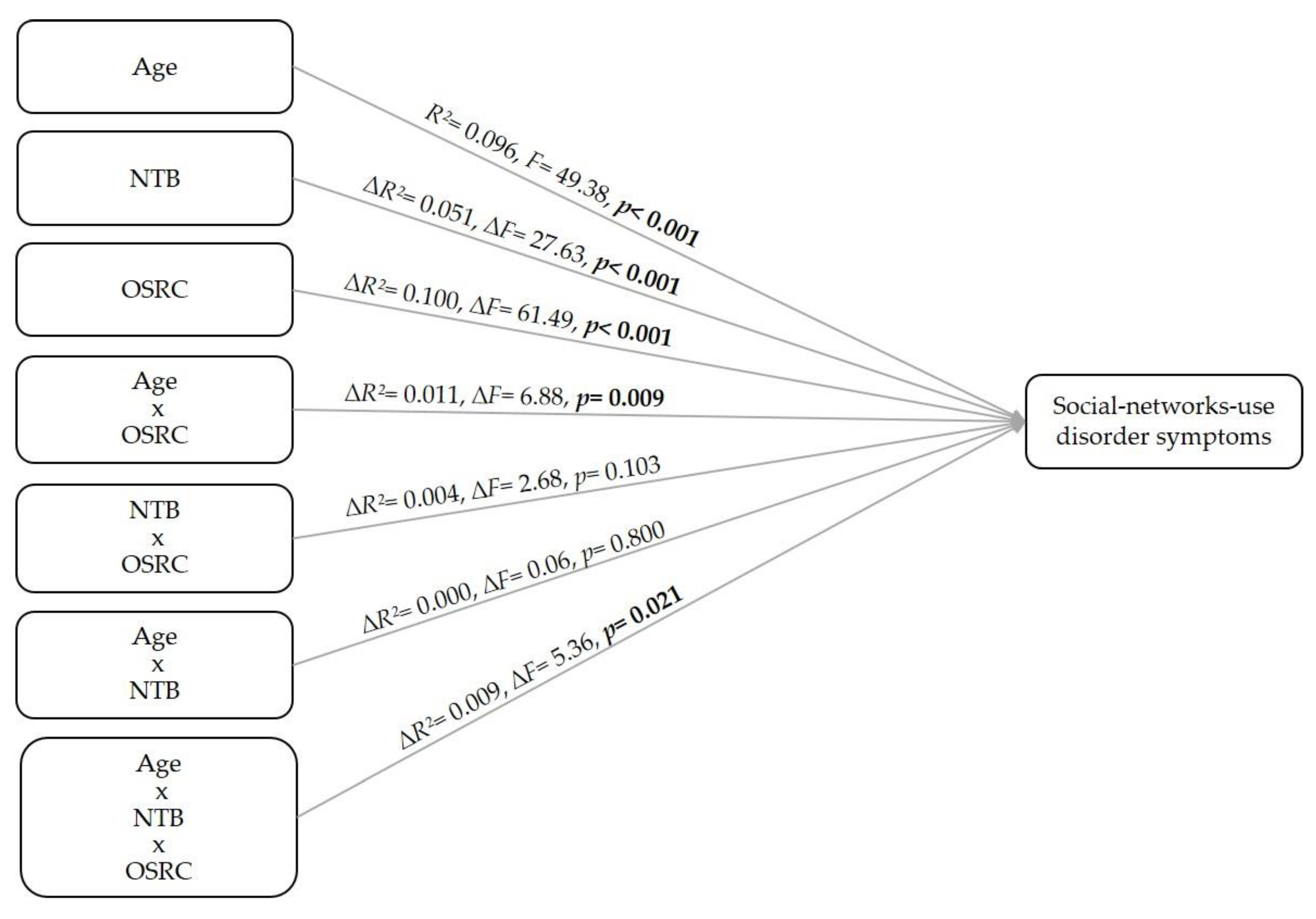