Internet Addiction in the Web of Science Database: A Review of the Literature with Scientific Mapping
Previous Article in Journal

Participants were screened from a sample of 27 college students who presented high IA symptomology, recruited through flyers on campus. Based on an initial interview and the Revised Chinese Internet Addition Scale (CIAS-R), we selected 18 subjects with scores ≥53. The other 9 had score <53 and were excluded. The final 18 participants were randomly assigned to experimental or control groups with inclusion criteria CIAS-R score ≥53, which represents moderate to high levels of IA. There were 9 in the experimental group, (male = 3, female = 6; age = 20.11 ± 1.45) and 9 in the control group (male = 3, female = 6; age = 20 ± 1.56). Non-parametric Mann-Whitney U tests showed that there was no significant difference in CIAS-R score between the two groups [Z = −0.71, p > 0.05]. We also used a self-reported Symptom Checklist-90 (SCL-90) questionnaire as an auxiliary selection tool, and the scores of each factor of the students in the two groups were less than 5, showing no symptoms of serious mental disorders. The study was given ethical approval by the Institutional Review Board of the Southwest University (No. 20180030).

Closed semi-structured group counseling was conducted on the experimental group once a week for five weeks. Every counseling session lasted about two and a half hours. There were one leader and two assistants in the group. The leader is a certified psychotherapist, and the assistants are psychology graduate students trained for group counseling. Their roles followed basic procedures that were designed in advance. Participants were given free interaction space. The leader regulated and navigated the group process according to the needs of the members. The control group did not receive any intervention. Both groups completed surveys at t1 and t2 (t1 + 5 weeks). The intervention group also completed a t1 + 6 months survey. Instruments included in the survey are outlined in the next section.

The scale [33,34] consists of 19 items, on a four-point Likert scale. Two subscales are Internet Addiction Core Symptoms (IA-Sym) and Internet Addiction Related Problems (IA-RP). Core symptoms include four dimensions: Compulsive and Withdrawal Symptoms of Internet addiction (Sym–C&Sym-W), Tolerance Symptoms of Internet Addiction (Sym-T), Interpersonal and Health-Related Problems of Internet Addiction (RP-IH), and Time Management Problems (RP-TM). The experimental group and the control group completed the scale before and after group counseling, and the experimental group also carried out follow-up measurement six months after group counseling. The higher the score, the greater the risk of IA is. CIAS-R is widely used in the measurement of IA. Several studies show that CIAS-R has good reliability, with Cronbach’s alpha ranging from 0.85 to 0.90 [34,35,36]. In this study, Cronbach’s alpha was 0.86, 0.89 and 0.83 in the three rounds of administration.

The experimental group was asked to evaluate the overall satisfaction with group counseling at the end of each session on a 10-point Likert scale (from 0 = “very unsatisfied” to 10 = “very satisfied”).

Quantitative data were analyzed with SPSS 23.0 (IBM Corp. Released, Armonk, NY, USA). We used the non-parametric Mann-Whitney U test and Friedman test for analyses. Qualitative data were sorted based on the Kawakita Jiro (KJ) method which is used to organize data into useful categories. It adopts the bottom-up sorting process and is very useful for classifying data. Based on the statement of significance of “Change after group counseling”, researchers summarized, coded and recorded responses with concise, independent and clear phrases, extracted representative topics, and formed a comprehensive database of self-reported parsed statements from group members.

The Solution Focused Brief Therapy Association listed three elements of SFBT [39]. First, there are the overall topics. SFBT conversations are centered on client concerns: who and what are important to the clients; a vision of a preferred future; clients’ exceptions, strengths, and resources related to that vision; scaling of clients’ motivational level and confidence in finding solutions; and ongoing scaling of clients’ progress toward reaching the preferred future. Second, SFBT conversations involve a therapeutic process of co-constructing altered or new meanings in clients. Third, therapists use a number of specific responding and questioning techniques that invite clients to construct a vision of a preferred future and draw on their past successes, strengths, and resources to make that vision a reality. Based on the above factors we designed five focused-solution group counseling sessions (Table 1), with the purpose of assisting college students to establish the goal of alleviating IA (e.g., Ask group members: what changes about IA do you want to make after our group counseling sessions?), reconstruct the problem (e.g., Let group members reflect on the pros and cons of the internet through the group counseling sessions, discussing and sharing with each other), expand positive resources and exceptional experience (e.g., Ask group members: in your past life, to some extent, did you ever think that your internet usage has reached the target state?), and actively seek and enrich solutions (e.g., Let the group members list obstacles they may encounter when using the internet in the future, proving better solutions, after brainstorms.). In group counseling, the leader encouraged and assisted group members to share their experiences (e.g., All members were invited to participate in the group counseling sessions, freely expressing their views and feelings.), and actively adopt a variety of questions (e.g., When group members share twice regarding their changes, the leader will ask more details about what caused these changes.), compliments (e.g., At the end of each session, praise is given to the group members on their efforts to solve and conquer the problems of IA.), other techniques in SFBT (e.g., miracle question: When you go back to sleep in the dormitory tonight, a miracle will happen and all the problems that you brought here have all been solved. (Pauses) But because you are sleeping, you don’t know that a miracle has happened. When you wake up the next day, what will you pay attention to, in order to know that a miracle has happened?).

The change in scores between t1 and t2 was used to compare the treatment and the control group changes (△= post-test score − pre-test score). We compared the scores with the non-parametric Mann-Whitney U test. The changes in both groups are shown in Table 2. As can be seen, both groups showed reduction in IA symptoms, but the reductions in the experimental group were larger. Specifically, the intervention produced significantly larger reductions, compared to the control group, in two IA symptoms: compulsive use and withdrawal (Sym-C & Sym-W) and tolerance (Sym-T), as well as in the total IA score. The small reduction in the control group may manifest from learning and social desirability.

3.2. Long-term Effects of the Intervention

To examine long-term effects of the intervention, beyond the immediate post-intervention effects, we followed up with participants six months after t1. The results of the non-parametric Friedman test showed that significant effects existed in all dimensions of IA (Table 3). Statistical analysis of the data using the Wilcoxon signed-rank test revealed that the IA scores in the pre-test were significantly higher than those in the post-test and follow-up tests for three dimensions of IA: compulsive and withdrawal (Sym-C & Sym-W), tolerance (Sym-T) and time management problems (RP-TM), as well as for the total IA score. In the dimension of interpersonal and health-related problems (RP-IH), the scores of the pre- and post-test were significantly higher than those of the follow-up test. As shown in Figure 1, the change trend of the total score of the CIAS-R was similar for all subjects in the experimental group.

3.4. The Change Questionnaire after Group Counseling of Experimental Group

In sum, this pilot study used solution-focused group counseling to treat college students with moderate to high levels of IA symptoms. The results suggested that solution-focused group counseling had positive effects on IA and some of its core dimensions, and was generally positively valued by participants. SFBT has the characteristics of high-efficiency, simplicity and durability in intervening with college students’ Internet use. We call for further studies to apply this approach and examine its merits.

We are grateful to all the volunteers for participating in the present study. 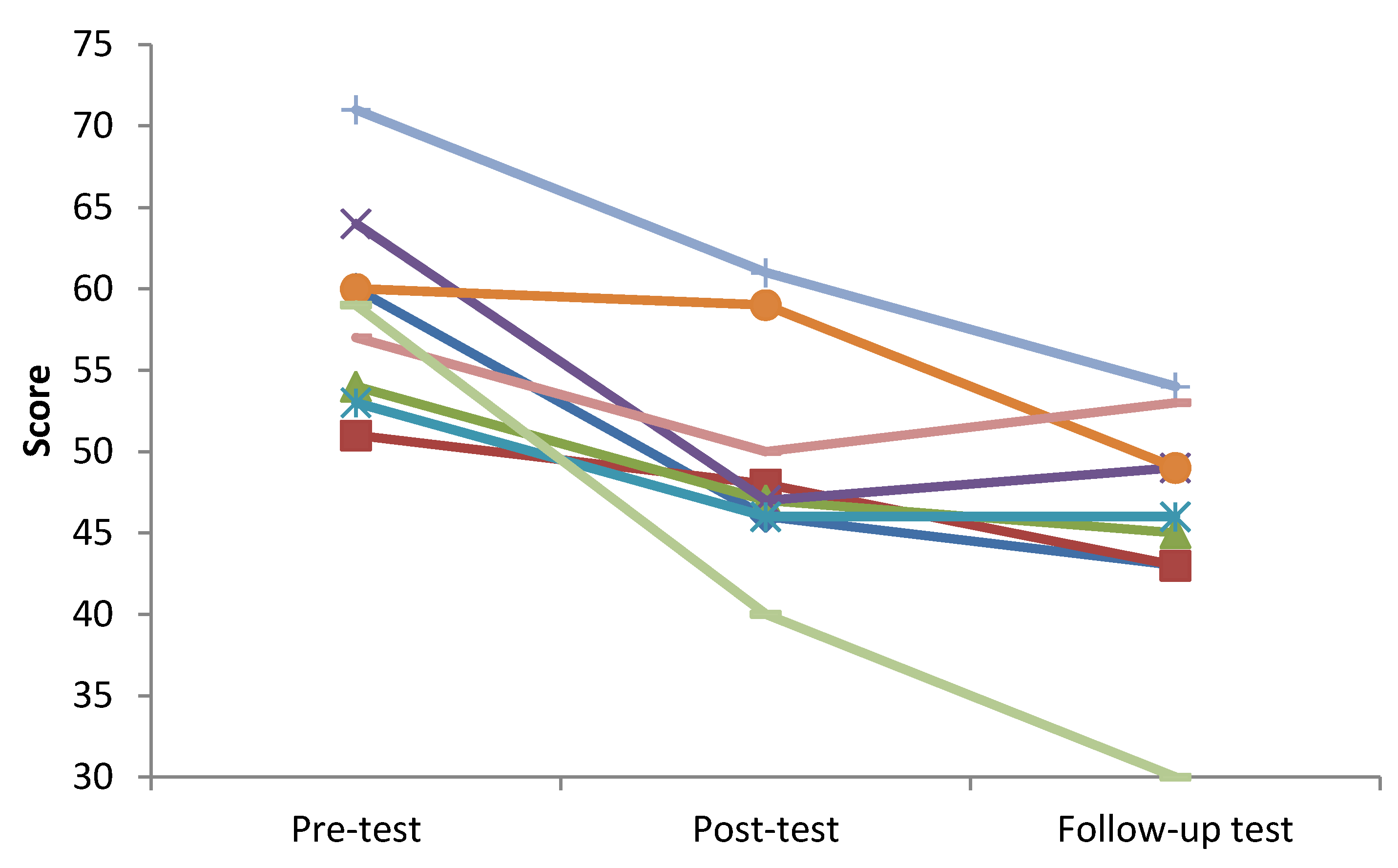