Density of Green Spaces and Cardiovascular Risk Factors in the City of Madrid: The Heart Healthy Hoods Study
Next Article in Special Issue

How Much Is Too Much? The Influence of Work Hours on Social Development: An Empirical Analysis for OECD Countries

A fixed-effect regression model was used to analyse the mechanisms of the interaction of work hours with individual health quality, organizational performance and economic development. Specifically, we used a three-stage least-square (3SLS) estimation of instrumental variables to explore the relationship among them, and the growth rate of variables at lag two was chosen as a tool variable for each variable at lag one. In terms of individual health, the concept of life expectancy was first proposed by Sanders, who referred to it as a new health indicator that combined mortality and morbidity [30]. It has become a commonly used measure of individual health [31]. Thus, in this study, the life expectancy of individuals (collected from data issued by the World Bank [32]) was selected as the measurement index of individual health. Control variables such as the youth dependency ratio were also added to the model. The specific model expression as follows:
This equation was used to test Hypothesis 1. In Equation (1), the real per capita gross domestic product (GDP) of countries in 2010 (in constant U.S. dollars) was used to indicate the quality of national economic development. In Equation (1), Timeit denotes average work hours in country i in year t, Youngit represents the juvenile dependency ratio of that country in that year, Oldit represents the old-age dependency ratio of that country in that year, Sit represents the savings rate of that country in that year, and α0 and ηit denote the fixed effect and disturbance of the corresponding equation, respectively, where α1–α6 are the estimated coefficients of the corresponding equation.
In terms of organizational performance, the total factor productivity (TFP) refers to the main output of each factor of the production unit [33], which is used as a common indicator to measure organizational performance [34]. Hence, TFP was chosen as the indicator of organizational performance to explore the impact of work hours. The specific model to test Hypothesis 2 is as follows:
In Equation (2), the set of country-specific variables was controlled to minimize errors from omitted variables. These variables include financial development (E, the proportion of total stock transactions to GDP), openness (F, the proportion of net foreign direct investment to GDP), human capital (H, the enrolment rate in colleges and universities), industrial development (I, the proportion of industrial value added to GDP) and infrastructure (Infra, per-capita electricity consumption). Moreover, β0 and μit represent the fixed effect and disturbance of the corresponding equation, respectively, and β1–β6 represent the estimated coefficients of the corresponding equation.
At the social level, economic development is influenced by various factors, including individual development and organizational performance [35]. Therefore, we incorporated Equation (1), which measures individual health quality, and Equation (2), which measures organizational performance, into an economic development model to explore the impact of work hours, individual health and organizational performance on economic development. The specific model to test Hypotheses 3 and 4 is as follows:
In Equation (3), RD indicates government research and development investment as a proportion of GDP, and γ0 and εit denote the fixed effect and the perturbation term of the equation. Respectively, γ1–γ7 are the estimated coefficients of the equation.

The observed growth in the world economy suggests fierce international competition, reinforcing the connections among countries. The development status of Organisation for Economic Co-operation and Development (OECD) countries effectively reflects the relationship between work hours and social development because its member states are at different levels of development. We selected data regarding work hours, economic development, etc. from 31 typical OECD countries as research samples to ensure consistency and comparability. Other development indices, such as GDP, TFP and life expectancy, were taken from the World Bank database [32]. Table 1 shows the explanatory variables, core explained variables and control variables.

The findings of this study confirm that current work hours in OECD countries are not conducive to individual health. In addition, as the basic unit of social development, the quality of individual development is directly related to the overall development of society [39]. In general, long work hours are not conducive to individual physical and mental health [40]. However, previous studies on the relationship between work hours and physical health were inconsistent. Although some studies have shown that work hours function as a risk indicator to employees [22], other studies suggested that the relationship between work hours and physical health is not significant. We believe that the reason for these different conclusions pertains to the generalisability of the samples. In our study, we selected official data on work hours from 31 OECD countries over the past 20 years. The data we used is thus highly representative, objective and authoritative, and this should render the results more convincing.
At the organizational level, there is a negative correlation between work hours and organizational performance. In other words, relying solely on increases in individual work hours will not promote organizational performance. Andreja et al. also revealed a causal link between work hours and economic development in European Union countries [41]. As Glosser and Golden suggested, the relationship between work hours and industrial employment levels, as well as industry output, had already begun to weaken by 1979 [29]. A possible explanation for these results is that the current number of hours worked has reached excessive levels in terms of the actual demands for improving efficiency. Previous studies have shown that long work hours contribute to burnout and even suicide [42,43,44]. Indeed, employee loss would decrease organizational performance [45]. This study provides powerful support for relevant policies seeking to constrain work hours in Italy and Finland [46,47].
At the social level, the results of regression analysis show an inverse relationship between work hours and economic development, indicating that an appropriate reduction in work hours is more conducive to socioeconomic development. Thus, guiding the work values of the upper social strata and establishing a demonstrative model is more effective than reducing individual work hours, because, as Cowling argues, social comparison, contagion and structure are the main causes of a culture of long work hours [48]. In addition, we found that an increase in female work hours is more conducive to economic growth than an increase in male work hours. Previously, a survey conducted by the World Health Organization showed that there are significant gender differences in work hours, and that the work hours and wages of males are much higher than those of females [49]. Bøler et al. also indicated that employers tend to recruit males for some particular positions because their work hours are more flexible than those of females [50]. It seems that males are more profitable for the development of an organization than females. However, our results show that increasing female work hours can promote economic development. Thus, mitigating gender differences in terms of work hours is an urgent matter. Indeed, work hours are considered an important indicator of national economic development and labour development [51]. However, our results show a marginally diminishing effect of work hours on economic growth: If the input factor of work hours increases continuously and equally to a certain output, the production efficiency will decline [52]. Therefore, reducing work hours appropriately will not hinder the rate of economic growth.
Furthermore, compared to the work hours of women, the work hours of men achieve a higher per capita baseline, and their contribution to economic benefits is more marginally diminished than that of women. The leisure economy may explain this phenomenon. The leisure economy, as a replacement for the work-hour economy, plays an important role in economic development [53]. It is believed that the absolutely dominant position of work in individual life will weaken in the future, and that a reasonable combination of work and leisure hours will be more conducive to long-term economic development.

4.2. Analysis of Differences between Work Hours and Levels of Development among Countries

The findings of this study demonstrate that the average work hours per capita in OECD developing countries are higher than those of developed countries, and that longer work hours in developing countries predict their development inversely from the perspective of individual, organizational and social factors. For developed countries, current work hours have a positive impact on organizational performance and economic development. We believe that this situation occurs mainly because of differences in industrialization and technological innovation between these two groups of countries. Developing countries in the OECD take advantage of their labour force by developing labour-intensive industries to reduce production costs from low levels of industrialization and technological innovation [54]. The result is a rigid requirement for more individual work hours.
By comparison, developed countries have higher levels of technological innovation, with higher per capita output per hour [55]. Therefore, they work relatively fewer hours. Furthermore, developing countries have several problems in terms of protecting labour rights, poor working conditions [56] and labour market segmentation [57]. These factors put pressure on individual worker to work longer hours. With reference to the findings of this study, we propose that the positive relationship between work hours and social development is becoming saturated, especially in developing countries. Consequently, priority should be placed on improving the level of technological innovation rather than extending work hours. Moreover, reducing work hours appropriately can be more beneficial to development. It would be beneficial for developing countries to provide reasonable policy guidance for reducing work hours, because several countries have promulgated laws to restrict organizational behaviour to protect employee rights with regard to work hours, such as the 405 Regulations issued by New York State to restrict resident work hours and labour legislation reform in Finland [47,58].
We found that men in OECD countries worked longer hours than women and that the proportion of men working overtime was higher. Generally, the traditional role of women is to care for the family [59]. Yet, the work hours of women have been increasing steadily due to more female workers entering the workplace, combined with economic development and greater public awareness [60]. For these reasons, women have suffered more conflict between work and family than males [61]. In this context, large numbers of women opt to reduce their work hours in order to balance work and family life [62]. On the whole, the average work hours of women were thus lower than those of males, and the proportion of overtime work by women was also lower.
Some limitations should be noted when considering this study. We exclusively analysed the impact and utility of work hours with regard to OECD countries. The impact of work hours on non-OECD countries remains to be determined. Further, we adopted a comprehensive and typical perspective of individual, organizational, and social factors to analyse work hours, although additional research perspectives should be considered as well. Finally, the indicators of the impact and utility of work hours need to be explored further. For example, cultural differences and the various political structures of countries should be considered. 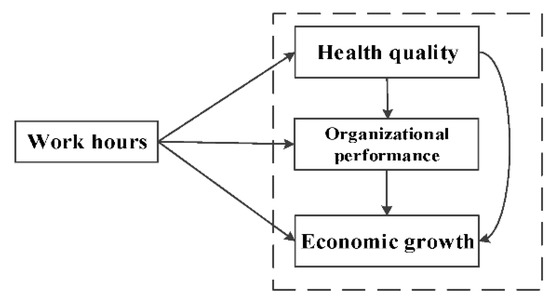