Assessing the Impact of School-Based Greenness on Mental Health Among Adolescent Students in Ontario, Canada

Neighbourhood greenness has been frequently associated with improved mental health in adulthood, yet its impact among youth is less clear. Additionally, though youth spend large portions of time at school, no study has investigated associations between school-based measures of greenness and students’ mental health in Canada. We addressed this gap by linking participant responses from the 2016–2017 Ontario Student Drug Use and Health Survey to school-based features of the built environment. Our analyses included 6313 students, ages 11–20. Measures of greenness were the mean and max of the annual mean Normalized Difference Vegetation Index within 500 m and 1000 m from the centroid of the school postal code. Measures of mental health included: serious psychological distress (Kessler 6-item Psychological Distress Scale), self-rated mental health (using a five-point Likert scale), suicide ideation, and suicide attempt. In our study population, the prevalence of serious psychological distress and low self-rated mental health was 16.7% and 20.3%, respectively. Suicide ideation was reported by 13.5% of participants, while 3.7% reported a suicide attempt. Quantity of greenness was similar between schools in the lower and upper quartiles. In logistic regressions, we found no association between objective school-based greenness and mental health, as assessed by multiple measures, both before and after adjustment. Null findings held true after stratification by season, as well. Whether other characteristics of school greenness (such as type, quality, or access and use) are more impactful to students’ mental health should be a focus of future analyses. View Full-Text
Keywords: built environment; schools; mental health; adolescent; survey built environment; schools; mental health; adolescent; survey
►▼ Show Figures 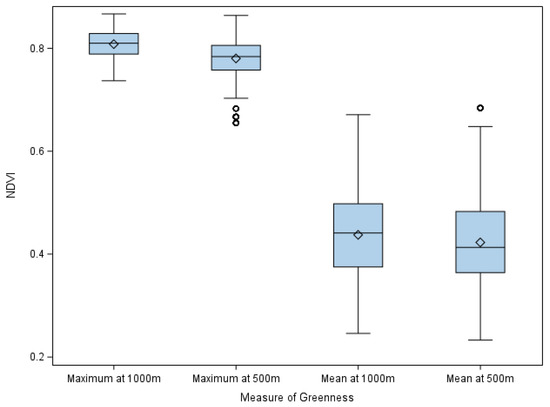