Investigation of a Ventilation System for Energy Efficiency and Indoor Environmental Quality in a Renovated Historical Building: A Case Study
Next Article in Special Issue

The oral health of an ageing population, especially that of the institutionalized elderly population, constitutes a significant concern because it is closely linked to general health and the quality of life. Shared common risk factors drive the development and worsening of poor oral health and non-communicable diseases, which eventually lead to self-care inability. Several studies have reported on the poor oral health of the institutionalized elderly population. However, few comprehensive reports exist regarding the relationship between poor oral health, the oral health-related quality of life (OHRQoL) and the associated factors in this specific population. Objective: The objective is to describe recently reported oral health levels, the OHRQoL and the associated factors among older institutional residents. Methods: Studies published between July 2009 and June 2019 in MEDLINE, EMBASE and CINAHL were searched. The population, intervention, comparison and outcome (PICO) strategy was used as a guide. The reported factors related to poor oral health were identified (i.e., age, gender, educational level, acquired systemic conditions or dementia/cognitive impairment). Results: Twenty-five surveys (or study series) from 19 countries were included. The level of evidence reported by these studies was generally moderate to strong. The reported oral cleanliness and health of the surveyed institutionalized elderly were poor (>50% of residents had calculus; denture hygiene index > 80%). Gum (approximately 30% of dentate residents had moderate to severe periodontitis), teeth (decayed, missing or filled teeth >20), mucosa (>10% had mucosal lesions) and denture problems (up to 40%) were prevalent and were associated with a poor OHRQoL, especially in females, socially deprived residents or those with mild or above cognitive impairment. Those with a poor OHRQoL might show signs of poor nutrition. Conclusions: This report reviewed evidence-based knowledge on oral health, the OHRQoL and the associated factors among elderly institutional residents. Further research is needed to confirm these observations. For improved oral health, a better OHRQoL and the general well-being of older residents, clinical trials are needed, targeting modifiable factors, such as social inequality, oral healthcare accessibility, and/or nursing home service quality. The relationship between oral health, the OHRQoL and nutrition in this at-risk population also warrants exploration. View Full-Text
Keywords: aged; geriatric dentistry; health services for the aged; nursing homes; oral health; systematic review aged; geriatric dentistry; health services for the aged; nursing homes; oral health; systematic review
►▼ Show Figures 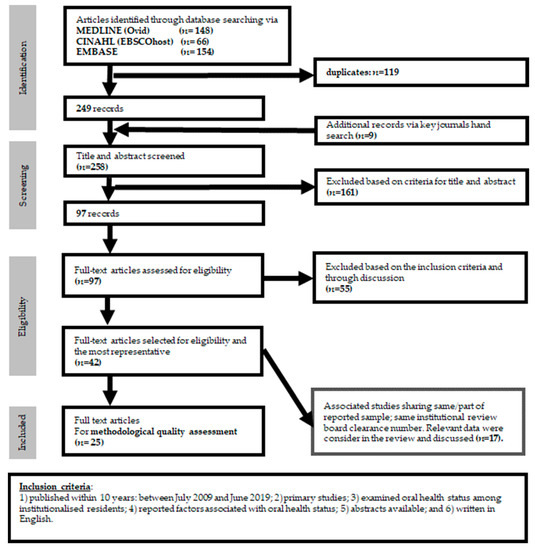