Healthy or Unhealthy? The Cocktail of Health-Related Behavior Profiles in Spanish Adolescents

Antenatal care (ANC) reduces adverse health outcomes for both mother and baby during pregnancy and childbirth. The present study investigated the enablers and barriers to ANC service use among Indian women. The study used data on 183,091 women from the 2015–2016 India Demographic and Health Survey. Multivariate multinomial logistic regression models (using generalised linear latent and mixed models (GLLAMM) with the mlogit link and binomial family) that adjusted for clustering and sampling weights were used to investigate the association between the study factors and frequency of ANC service use. More than half (51.7%, 95% confidence interval (95% CI): 51.1–52.2%) of Indian women had four or more ANC visits, 31.7% (95% CI: 31.3–32.2%) had between one and three ANC visits, and 16.6% (95% CI: 16.3–17.0%) had no ANC visit. Higher household wealth status and parental education, belonging to other tribes or castes, a woman’s autonomy to visit the health facility, residence in Southern India, and exposure to the media were enablers of the recommended ANC (≥4) visits. In contrast, lower household wealth, a lack of a woman’s autonomy, and residence in East and Central India were barriers to appropriate ANC service use. Our study suggests that barriers to the recommended ANC service use in India can be amended by socioeconomic and health policy interventions, including improvements in education and social services, as well as community health education on the importance of ANC.
Keywords: antenatal care; India; factors; Demographic and Health Survey; enablers; barriers antenatal care; India; factors; Demographic and Health Survey; enablers; barriers

Pregnancy and childbirth complications are the leading causes of maternal mortality worldwide, as an estimated 830 women lose their lives daily from preventable pregnancy- and/or childbirth-related causes. Over 99% of those maternal deaths occur in low- and middle-income countries (LMICs, including India) [1]. Antenatal care (ANC) provides a unique opportunity for screening and diagnosis, health promotion, and disease prevention among pregnant women, and their families and communities [2]. Appropriate utilisation of ANC services corresponds to improved maternal and newborn health, as well as a reduction in maternal deaths during pregnancy and childbirth [3,4,5]. Based on the benefits of ANC, the World Health Organisation (WHO) recommends that pregnant women should attend at least four ANC visits to increase opportunities for risk stratification and/or the identification, prevention, and management of pregnancy and/or comorbidities, as well as health promotion [2].
Worldwide, approximately 64% of women had attended four or more ANC visits in 2016. However, the attainment of the recommended ANC visits varied between and within countries, with LMICs reporting lower percentages [2]. In India, previous reports have indicated that the proportion of women who had four or more ANC visits has increased by approximately 38% over a 10-year period, from 37% in 2006 [6] to 51% in 2016 [7]. While this improvement in ANC service use may be commendable, it also suggests that many Indian women do not achieve the recommended four or more ANC visits, a proxy for comprehensive maternal care during pregnancy [2]. This lack of access to appropriate ANC may have potentially adverse short- and long-term impacts on Indian women and newborns. These adverse effects may include maternal death or health loss from haemorrhage, hypertensive disorders, sepsis, and abortion [4,8], as well as stillbirth and neonatal death [9].
Past nationally representative studies conducted based on the 2005–2006 India Demographic and Health Survey (DHS) data elucidated a number of factors associated with the underutilization of ANC services. These factors included low parental education, urban residence, a lack of mass-media exposure [10], lower household wealth, the region of residence, and belonging to Scheduled Castes, Scheduled Tribes, and the other backward class [11]. In addition, previous subnational studies suggested that financial and cultural issues, as well as a lack of awareness of the benefits of ANC among women and their partners, were also barriers to appropriate ANC service use [12,13]. Nevertheless, it is uncertain whether these factors have changed in the past 10 years in India, given the improvements in household economic and educational status [14], social mobility of women [15,16], and the implementation of the Government of India maternal and child health interventions. These programs included the National Rural Health Mission (2005), the National Urban Health Mission (2008), and the Reproductive, Maternal, Newborn, Child, and Adolescent Health (RMNCH+A) Strategy, introduced in 2013 to improve maternal and child health outcomes, including promotion of ANC service use [17]. Understanding the contextual factors that influence a mother’s decision to attend, or not to attend ANC is crucial to healthcare practitioners and policymakers, as it can offer relevant information and opportunities for targeted policy interventions.
Additionally, findings from the 2005–2006 India DHS may also differ from those obtained from the 2015–2016 DHS, the data source for the present study, due to variations in the sample size and methods used. The 2015–2016 India DHS collected data from 601,509 households, drawn from about 1.2 billion people [7], compared to 110,000 households in the 2005–2006 DHS, drawn from approximately 1 billion people [6]. Also, the 2015–2016 DHS methodology now forms the foundation for future national household surveys in India [7]. The availability of improved methodology for health information gathering and data also suggests the need for up-to-date evidence on the determining factors of ANC service use to guide national maternal health efforts. Therefore, the study aimed to investigate the enablers and barriers to ANC service use in India.

The broader methodological approach used in this study has been described in previously published studies [18,19,20]. In summary, the present study was based on the 2015–2016 India DHS, also known as the National Family Health Survey (NFHS-4). The data were collected by the International Institute for Population Sciences (IIPS), supervised by the Ministry of Health and Family Welfare (MoHFW), Government of India. A stratified two-stage sampling design for both rural and urban areas was used to obtain the total sample, based on the 2011 census frame, with villages serving as the primary sampling units (PSU) in rural areas and census enumeration blocks as the PSU in urban areas [7]. Using a standardised questionnaire, maternal and child health information (e.g., antenatal care, delivery care, postnatal care, and infant and young child feeding), as well as sociodemographic characteristics, were collected from eligible women aged 15–49 years in 601,509 households. Respondents were women who were residents in the household 24 h prior to the survey. In these households, 699,686 women were interviewed (204,735 in urban and 494,951 in rural areas), with an overall response rate of 96.7%. Detailed information on the survey methodology is provided in the final India DHS report [7].
In the present study, we used a total weighted sample of the 183,091 most recent live-birth infants of mothers, consistent with the India DHS report [7] and previously published studies [21,22], in an effort to minimise the potential effect of recall bias.

The statistical approach was similar to previous studies [20,26,29]. In this study, preliminary analyses were conducted to describe the survey frequencies, as well as the prevalence of ANC service use and by the study factors in India using the Taylor series linearization to estimate confidence intervals (CIs) around the prevalence estimates. This was followed by the analysis to investigate potential factors related to the use of ANC services in univariate and multivariate multinomial logistic regression models. Generalised linear latent and mixed models (GLLAMM) with the mlogit link and binomial family that adjusted for clustering and sampling weights were used to assess the association between the independent variables and the outcome variables (no ANC visits, one to three ANC visits, or four or more ANC visits). A four-stage model was employed in the multivariate analyses, similar to the adopted conceptual model described by Anderson [23] and used in past studies [18,19]. In the first stage, community-level factors were entered into the model to assess their association with the outcome variables. In the second stage, the significant factors obtained from the stage one model were added to socio-demographic and health service factors to examine their relationship with the outcome variables. The same analytical approach was used for the enabling and need factors in the third and fourth stages, respectively. Any collinearity between the study factors was also investigated but none was evident in the analyses.
For the multivariate model, we calculated and reported statistically significant odds ratios (ORs) and their corresponding 95% CIs as the measure of association between the study factors and ANC service use in India. The analyses were conducted using the ‘svy’ command in Stata version 15.0 (Stata Corp, College Station, TX, USA) to adjust for clustering and sampling weights.

The DHS project sought and obtained the required ethical approvals from Ethics Review Board of the International Institute for Population Sciences, Mumbai, India before the surveys were conducted, with informed consent obtained from participants during the surveys. Approval to use the data was sought from Measure DHS and permission was granted.

3.1. Distribution of ANC Service Use by Study Factors

This study had limitations. First, the study was based on cross-sectional data, which makes an assessment of a clear temporal relationship between the study factors and ANC attendance impossible. Second, the ANC data collected during the NFHS-4 would have been subjected to recall bias, as it relied on self-reporting. This may have resulted in misclassification measurement bias, and subsequently, led to either an over- or under-estimation of the effect size between the study factors and ANC service use. Third, there was a lack of assessment of other potential confounders (e.g., data on health care access or health status of pregnant women), which may have provided additional information with the enablers and barriers to ANC service use in India. The study also had strengths. First, the large representative sample, with a high response rate (approximately 98%). This implies that selection bias may be unlikely to affect the observed results. Second, trained personnel with validated questionnaires were used to collect data in the NFHS-4, which would have strengthened the internal validity of the study. Lastly, the study provides insight into key determinants of ANC visits in India, and thus, provides an opportunity for policymakers and public health practitioners to design and implement focused MCH interventions.

The present study indicated that higher household wealth status and parental education, belonging to other tribes or castes, a woman’s autonomy to visit the health facility, residence in Southern India, and desire for pregnancy, as well as exposure to the media, were enablers to frequent ANC service use. In contrast, residence in the East, Northeast, and Central regions of India were barriers to the utilisation of ANC services. Also, women from poorer households, those with no or primary education, and women who were not exposed to mass media were less likely to use ANC services compared to their counterparts. Our study elucidates key enablers and barriers to ANC attendance in India. It is vital that current and/or future MCH initiatives focus on women with socioeconomic vulnerabilities, while also designing and implementing multi-pronged MCH interventions that aimed to increase ANC uptake among underserved Indian women.

This research received no external funding. The APC was funded by the early career research funding grant from the Office of the Deputy Vice-Chancellor (Research and Innovation), Western Sydney University, obtained by Felix Akpojene Ogbo.

The authors are grateful to Measure DHS, ICF International, Rockville, Maryland, USA for providing the data for the analysis. The time and effort of Nilu Nagdev in reading the initial manuscript is also acknowledged.

The authors declare no conflict of interest. Felix Akpojene Ogbo is an Editorial Board Member for International Journal of Environmental Research and Public Health but did not play any role in the peer-review and decision-making process for this manuscript. 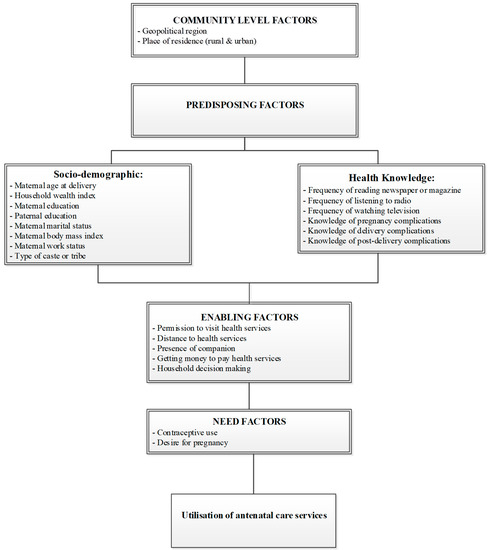 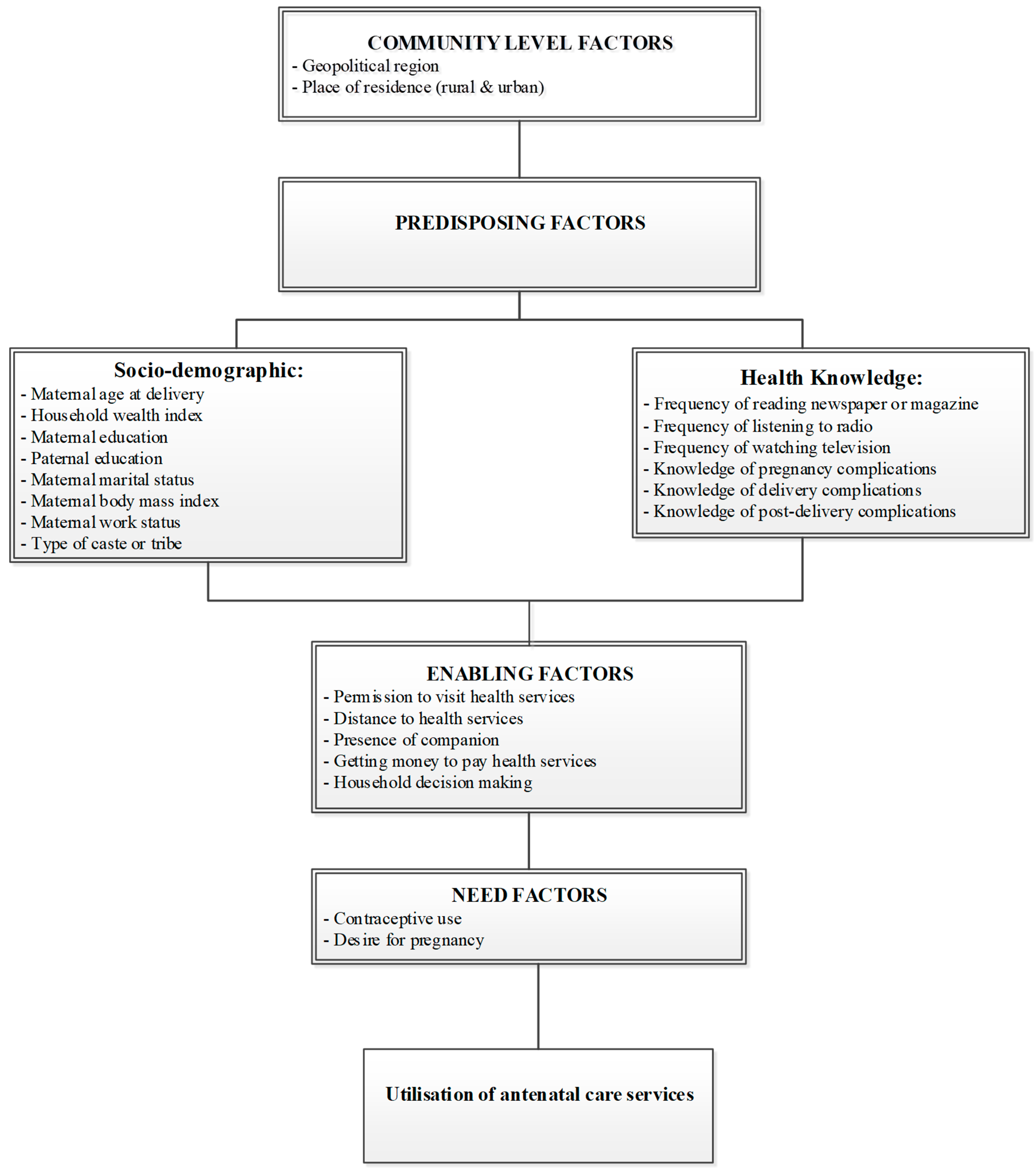