The Distribution of Available Prevention and Management Interventions for Fetal Alcohol Spectrum Disorder (2007 to 2017): Implications for Collaborative Actions
Previous Article in Special Issue

The Search for Environmental Justice: The Story of North Birmingham

Gentrification and Displacement in the San Francisco Bay Area: A Comparison of Measurement Approaches

It has been well established that place impacts health [1,2]. An extensive body of research has documented that neighborhood physical and social environments are associated with a myriad of health outcomes over the lifecourse (e.g., pre-term birth, physical and mental health in childhood and adulthood, mortality) [1,3,4,5,6] and are important root causes of racial/ethnic health inequalities [7,8,9]. As a result, efforts to improve neighborhood environments are being leveraged in order to achieve health equity [10,11]. Their success is predicated on understanding the structural processes that accompany neighborhood revitalization and change initiatives. Gentrification is one such process that is highly controversial and hotly debated, given its potential to be both beneficial and harmful to community residents [12,13,14,15].
Gentrification is a process through which lower-income neighborhoods experience capital investments and an influx of wealthier residents [16,17,18]. New investments, business developments, and increases in the tax base all have the potential to reinvigorate neighborhoods that have experienced historical disinvestment and to provide significant capital gains. However, these improvements may come at the expense of long-time residents and businesses, who are forced to move as their neighborhoods become unaffordable [15,19]. The extent of displacement is unknown but nonetheless has the potential to alter the community fabric, sever social support networks, and reduce social capital for the most vulnerable residents, including the poor, elderly, people living with disabilities, and racial/ethnic minorities [15,19,20,21].
The ways in which gentrification and displacement may impact health are understudied with important implications. Gentrification can affect health through multiple pathways by altering the built environment and health-promoting resources, as well as by affecting the community social environment (Figure 1) [19]. For instance, gentrification can affect the placement and upkeep of community resources vital to health, such as neighborhood parks and playgrounds that encourage physical activity or grocery stores that supply healthy food. These health-promoting resources have been shown to have beneficial impacts on health [22,23]. Gentrification can also affect community social cohesion when long-time residents, integral members of social networks of trust and support, move out as a result of involuntary displacement. Gentrification-driven displacement of vulnerable residents, who often have the worst health profiles, may contribute to widening health disparities [19]. This is complicated further by the fact that government-led investment initiatives may themselves precede and/or promote widespread gentrification, leading to further changes in the built and social environments. Earlier investments may indeed be beneficial to the neighborhood’s longtime residents, while the effects of subsequent changes may be more uneven, helping some populations while harming others who are marginalized or displaced by the altered landscape.
In order to develop a better understanding of gentrification, it is first necessary to conceptualize and measure it; currently, there is little consensus regarding the best methodology. Some studies have measured gentrification using aggregate census data that document changes in median household income [24] or changes in occupation composition of the census tract such as the proportion of professionals [25]. Others have used more complex methodologies that combine census data and home sales data to focus on demographic change as well as changes in amenities and transit. These methods take into account location, accessibility, and the role of displacement [15,26,27]. Which of these measures best captures the concept of gentrification and its association with health outcomes remains understudied [28].
Thus, the overall goal of this study was to compare and contrast three gentrification classification methodologies in relation to their ability to identify neighborhood gentrification in nine San Francisco Bay Area counties between 2000 and 2013. The San Francisco Bay Area is one metropolitan region in the United States that is experiencing these trends acutely. The cost of living in the Bay Area has risen dramatically. Gentrification, fueled by the influx of high-salaried technology employees combined with a shortfall of housing stock, has become a contentious issue in historically lower-income neighborhoods [29]. Developing a better understanding of the implications of gentrification and displacement for health in the San Francisco Bay Area may provide insight for other cities experiencing similar circumstances. By comparing how different methodologies characterize changes occurring at the neighborhood level, we can begin to discern how the decisions we make in conceptualizing and measuring gentrification might affect health and health inequalities.

We examined census tracts in the nine Bay Area counties, which include Alameda, Contra Costa, Marin, Napa, Santa Clara, San Francisco, San Mateo, Solano, and Sonoma counties. This region is geographically diverse and contains urban, suburban, and rural areas, with a total population of 7,257,501 people in 2013. This region is also one of the most racially and ethnically diverse regions in the country [30].
Over the past several decades, there have been great demographic and economic shifts in the Bay Area. In particular, there has been significant population growth, largely fueled by an influx of people of color moving to the region [28]. Asian Americans and Hispanics/Latinos have contributed to much of this growth [28]. In 1980, no county in the Bay Area had <50% non-Hispanic White residents, whereas currently, all counties except for Marin county have ≤50% non-Hispanic White residents [30]. The Bay Area has also undergone significant economic growth over the past several decades, accompanied by a sharp increase in income inequality. Since 1979, the highest paid workers in the region have experienced significant growth in wages, while the wages of the lowest paid workers have declined [28].

We employed three measures of neighborhood gentrification. The Freeman and Landis measures are well-established measures of gentrification and neighborhood change. We also included a more contemporary measure from the Urban Displacement Project (UDP), which provides a more nuanced view of the stages of gentrification. Details on the construction of the three measures can be found in Table S1. We defined neighborhoods as census tracts given robust evidence that tract-level geographic boundaries have been shown to be predictive of health. Below we describe the unique features of each measure as well as their strengths and limitations.

The Freeman Method is considered the gold standard of measuring neighborhood gentrification [15]. Census tracts were defined as gentrifiable if at the beginning of a defined period (year 2000, based on the US Census), it met the specified inclusion criteria: (1) the tract was at or below the median income for its respective metropolitan area, (2) the percentage of housing stock within the tract built in the prior twenty years was at or below the median for all census tracts in the metropolitan area, and (3) at least 50% of the census blocks within the tract were defined as urban.
We made two slight modifications to the Freeman method. First, we chose to use a relatively large area, the San Jose—San Francisco—Oakland Combined Statistical Area (CSA) as the metropolitan area to simplify the analysis. Whereas the borders of individual metropolitan areas have changed substantially between 2000 and 2013, the CSA boundaries have remained stable, simplifying the measurement of variables over time. This CSA also closely approximated the nine-county Bay Area. Second, we used a 50% urban cutoff for inclusion, rather than the “central city” designation employed by Freeman. This decision was rooted in our desire to include as many of the nine-county census tracts as reasonably possible and to use publicly available census data, rather than relying on other data sources, in order to maximize the generalizability of this approach.
We further categorized census tracts that met eligibility criteria for being gentrifiable as having either gentrified or not during the 2010–2013 period, a timeframe chosen to match the period analyzed by the UDP. Tracts were considered as gentrifying if they (1) saw an increase in median home sale price over the period in question and (2) saw an increase in educational attainment (those at least 25 years old possessing a bachelor’s degree or higher) exceeding that of the metropolitan area as a whole. The benefit of the Freeman measure, which serves as the basis for many more contemporary measures of gentrification, is that it is rooted in a strong conceptual framework and critical historical analysis. It can also be readily generalized to other geographic areas. However, an important limitation is its inability to characterize gentrification in non-urban areas, which limits its usefulness in characterizing such processes in more suburban and rural areas. The Freeman measure also does not capture stages of gentrification.

M.S.M., E.K.S., J.I., and I.H.Y. were involved in the design of the study. E.K.S. was primarily responsible for the data analysis with assistance by J.I. and X.G. M.S.M. wrote the manuscript with significant contribution from E.K.S. and J.I. All authors reviewed the manuscript and provided edits on manuscript drafts and approved the final manuscript for submission for publication.

This work was supported by the National Institutes of Health, National Heart Lung and Blood and Lung Institute [K01HL115494].

The authors would like to thank Miriam Zuk for her contribution to this study. 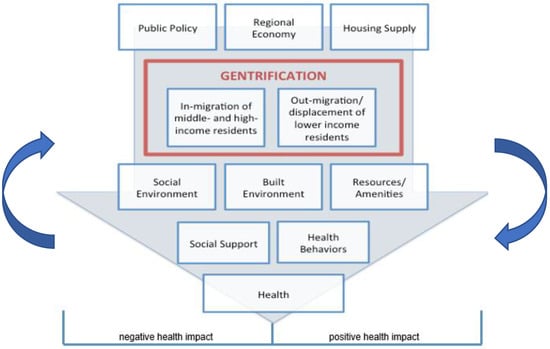 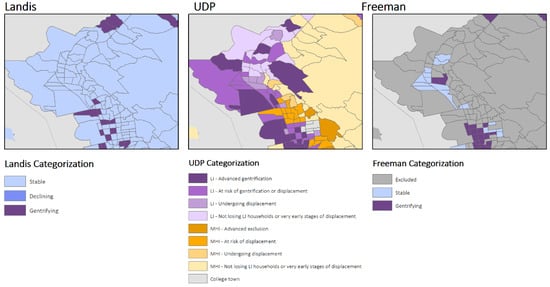 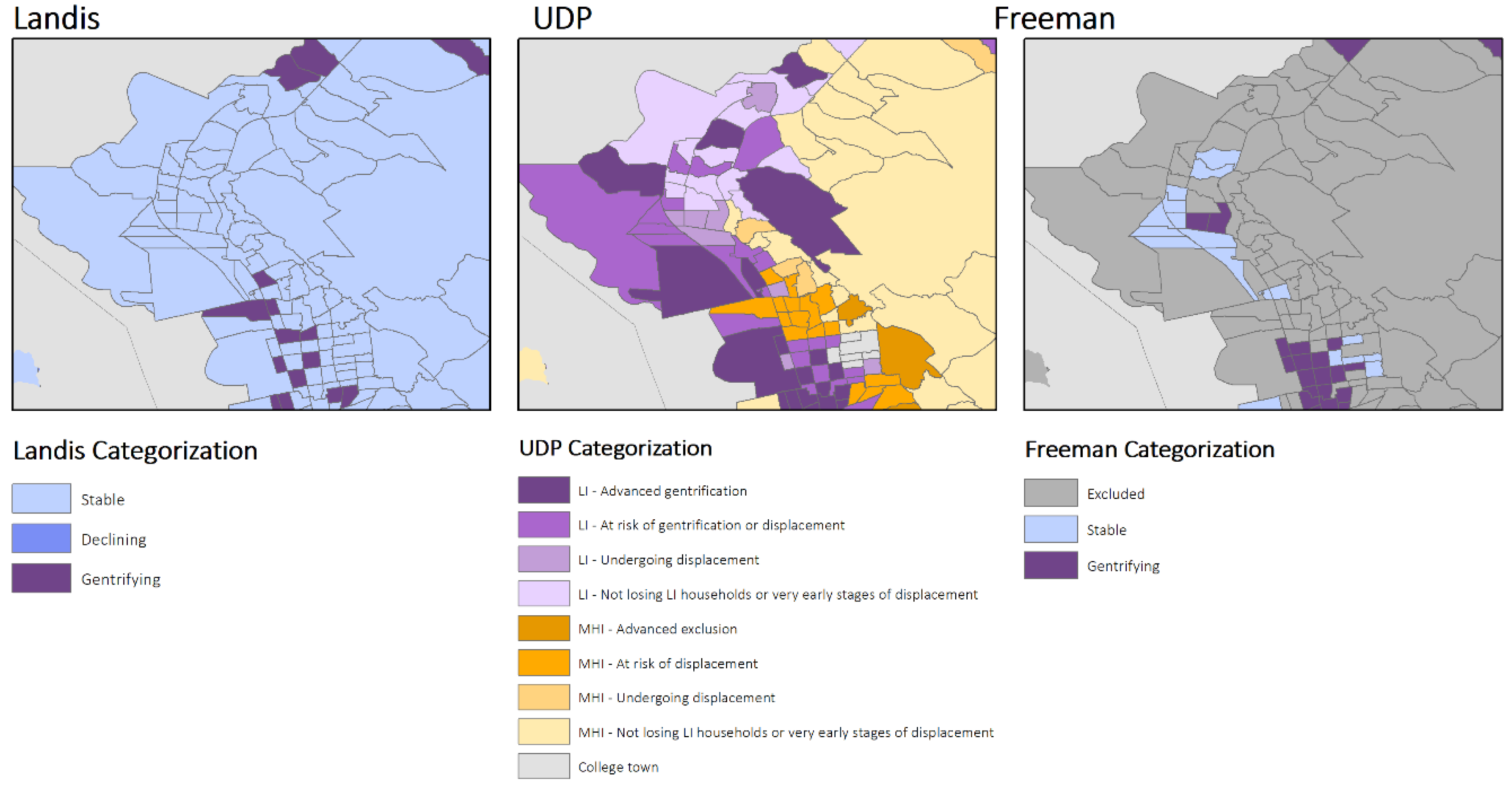 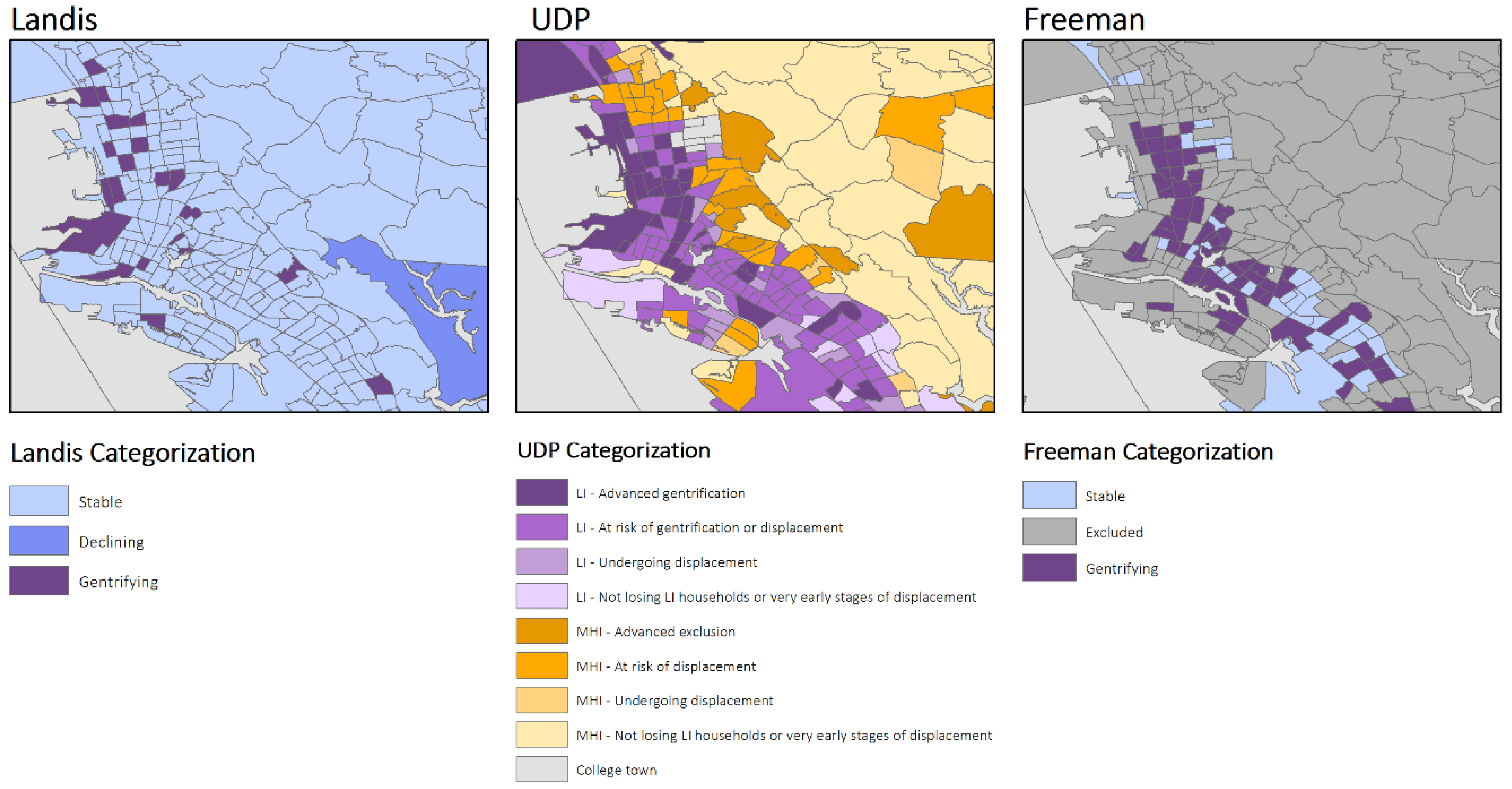