The Role of Individual and Neighborhood Characteristics on Mental Health after a Period of Economic Crisis in the Lisbon Region (Portugal): A Multilevel Analysis
Previous Article in Journal

Spatiotemporal Associations between PM2.5 and SO2 as well as NO2 in China from 2015 to 2018
Previous Article in Special Issue

Gentrification and Displacement in the San Francisco Bay Area: A Comparison of Measurement Approaches

:
Disparities in healthy food access are well documented in cross-sectional studies in communities across the United States. However, longitudinal studies examining changes in food environments within various neighborhood contexts are scarce. In a sample of 142 census tracts in four low-income, high-minority cities in New Jersey, United States, we examined the availability of different types of food stores by census tract characteristics over time (2009–2017). Outlets were classified as supermarkets, small grocery stores, convenience stores, and pharmacies using multiple sources of data and a rigorous protocol. Census tracts were categorized by median household income and race/ethnicity of the population each year. Significant declines were observed in convenience store prevalence in lower- and medium-income and majority black tracts (p for trend: 0.004, 0.031, and 0.006 respectively), while a slight increase was observed in the prevalence of supermarkets in medium-income tracts (p for trend: 0.059). The decline in prevalence of convenience stores in lower-income and minority neighborhoods is likely attributable to declining incomes in these already poor communities. Compared to non-Hispanic neighborhoods, Hispanic communities had a higher prevalence of small groceries and convenience stores. This higher prevalence of smaller stores, coupled with shopping practices of Hispanic consumers, suggests that efforts to upgrade smaller stores in Hispanic communities may be more sustainable.
Keywords:
food environment; food access; low-income communities; supermarket; grocery store; convenience store

Healthy food access is critical to improve population health [1] and to reduce social inequalities [2]. In longitudinal analyses, positive health outcomes, including lower risk of heart disease and diabetes, have been attributed to community level access to healthy food [3,4]. Conversely, greater exposure to unhealthy food outlets negatively impacts body mass index (BMI) [5]. In the United States, recommendations from the Centers for Disease Control and Prevention (CDC) and the National Academy of Medicine advocate for improving access to and consumption of healthy, safe, and affordable food, and at the same time reducing access to and consumption of calorie-dense, nutrient-poor foods. One strategy for accomplishing these goals is to increase community access to healthy foods through supermarkets, grocery stores, and healthy convenience/corner stores [6,7]. A richer understanding of the availability of healthy foods among population subgroups is critical to targeting and tailoring such interventions.
Disparities in access to healthy food in communities across the United States have been well documented in cross-sectional analyses [8,9,10,11]. Low-income and minority communities, compared to middle/high-income and predominantly white communities, tend to have more convenience stores, which sell predominately highly processed, energy-dense foods with little fresh produce [12,13]. In addition, these same communities tend to have fewer supermarkets, which carry a greater variety of nutritious food, and often at a lower price [14]. Supermarket prevalence may also differ by race/ethnicity, with predominantly white neighborhoods having the greatest access, followed by black communities, and predominantly Hispanic neighborhoods having the fewest supermarkets [10]. These disparities in healthy food access contribute to an urban environment in which healthy food is inaccessible and unaffordable for many of its residents [15].
Among the few existing longitudinal studies, Rummo et al. [16], building on the Coronary Artery Risk Development in Young Adults (CARDIA) study and using retrospective data from a commercial data source, found that density of convenience stores decreased over time in higher income neighborhoods and that fast food restaurant density decreased in low-income areas when the white population in those areas increased. Richardson et al. [17], using the same data source, found that neighborhoods that declined in socioeconomic status over the previous 20 years had the highest numbers of convenience stores compared to upwardly mobile, stable high, and stable low socioeconomic status (SES) neighborhoods. Lastly, James et al. [18] examined historical trends in the food environment in their Framingham study cohort, also using retrospective data from multiple sources, and found that over a 40-year period, poorer neighborhoods, compared to higher-income neighborhoods, consistently had higher numbers of fast food outlets. Taken together, these studies suggest that disparities in access to healthy food have persisted over time.
Our study focuses on a comprehensive set of healthy and unhealthy food outlets among low-income populations in Camden, Newark, New Brunswick, and Trenton, New Jersey, United States, and analyzes prevalence trends over a nine-year period by community-level income and race/ethnicity. This period of observation, 2009–2017, was particularly salient. Not only did it span the occurrence of a major recession, but also during this time, substantial public and private investment in initiatives to improve food access were undertaken in the four study cities. Further, our study methodology improved upon and addressed shortcomings of several previous studies. It avoided misclassification bias associated with sole reliance on commercial data sources assembled retrospectively and not verifiable by ground-truthing. Rather, it relied upon multiple sources of data to maximize capture of relevant change, and subjected the data to an established protocol for cleaning, classifying, and confirming the status of outlets in real time [19].

Data on retail food outlets in the four study cities were matched to census tracts based on the geocoded location of the outlets. Data were collected at six time points, over a nine-year period between 2009 and 2017. Retail food outlet location data were matched with demographic census data.

2.1. Sources of Data and Variable Construction

Census tract variables were obtained from the American Community Survey [20], which contains five-year estimates of all variables beginning in 2009. For each census tract in the sample, we drew the five-year estimates for total population, proportion of residents by race/ethnicity, and median household income.
Census tract divisions are updated before each decennial census in order to maintain an optimum population size. While the intention is to keep them the same over time so that statistical comparisons can be made from one census to the next, in some cases it is necessary to split, merge, or eliminate census tracts [21]. In the current analysis, 142 census tracts from the four study cities were included in the longitudinal sample from 2009 to 2017. Census tracts in 2009 were adapted to match the census tracts revised in the 2010 census. The 2010 census geographies were used as the benchmark to calibrate the 2009 demographic and socioeconomic variables, such as population, median household income, and ethnicity. Specifically, layers of 2000 census tract data were overlaid with 2010 census tract data to identify the discrepancies between the geographic boundaries given by the two decennial censuses (e.g., additional area added to a 2010 census tract). We adopted distributions at a finer geography, the block group level, to help achieve better interpolation results [22]. For the population variable, the population count for the discrepancy areas was computed by assuming that population within a block group is uniform. For other socioeconomic variables, the interpolation process involved the inclusion of another variable such as population as these socioeconomic variables are derived variables. For example, the median household income estimation for new census tracts used the block group level income information and the associated population to infer the median household income for the new geography.

Lists of retail food outlets in each of the four cities were obtained from two United States-based commercial data companies—InfoUSA and Trade Dimensions/Nielsen. Stores were categorized as supermarkets, small grocery stores, convenience stores, or pharmacies based on a combination of North American Industry Classification System (NAICS) codes, sales volume, name recognition, and quantities of specific foods stocked by the store. The methodology was developed by Ohri-Vachaspati et al. [19], building on previous literature [24,25]. Stores with less than $1 million in annual sales were classified as convenience stores, as were those from larger chains such as Wawa, 7-11, and QuickChek. Stores with sales volumes between $1 and $2 million that sold at least three of the following four items—five types of fruits, five types of vegetables, fresh or frozen meat, and skim or 1% milk—were classified as small grocery stores, while those that sold less than three of the items were classified as convenience stores. Information on what items were stocked was obtained by calling stores. Supermarkets had sales over $2 million and four or more checkouts. Local and national pharmacy chains and stores identifying as pharmacies were categorized as such. As a final step, data from multiple sources were de-duplicated and checked for misclassifications. Data were available for 2009, 2012, 2013, 2014, 2015, and 2017.

The nine-year period between 2009 and 2017 saw significant changes in the food environment in low-income high-minority communities in New Jersey. Significant declines in the prevalence of convenience stores were observed in the lowest-income and highest-minority neighborhoods, most likely resulting from declining incomes in these neighborhoods. A small but significant increase in the prevalence of supermarkets in middle-income tracts may have been a result of efforts to promote healthy food access in the communities under investigation. Our results suggest that communities similar to those we studied that support initiatives to promote healthier inventory in small stores may wish to target Hispanic neighborhoods as they have a higher prevalence of convenience and small grocery stores, and residents of these communities are more likely to shop at these establishments.

The authors would like to acknowledge Ms. Kristen Lloyd’s help in data management. 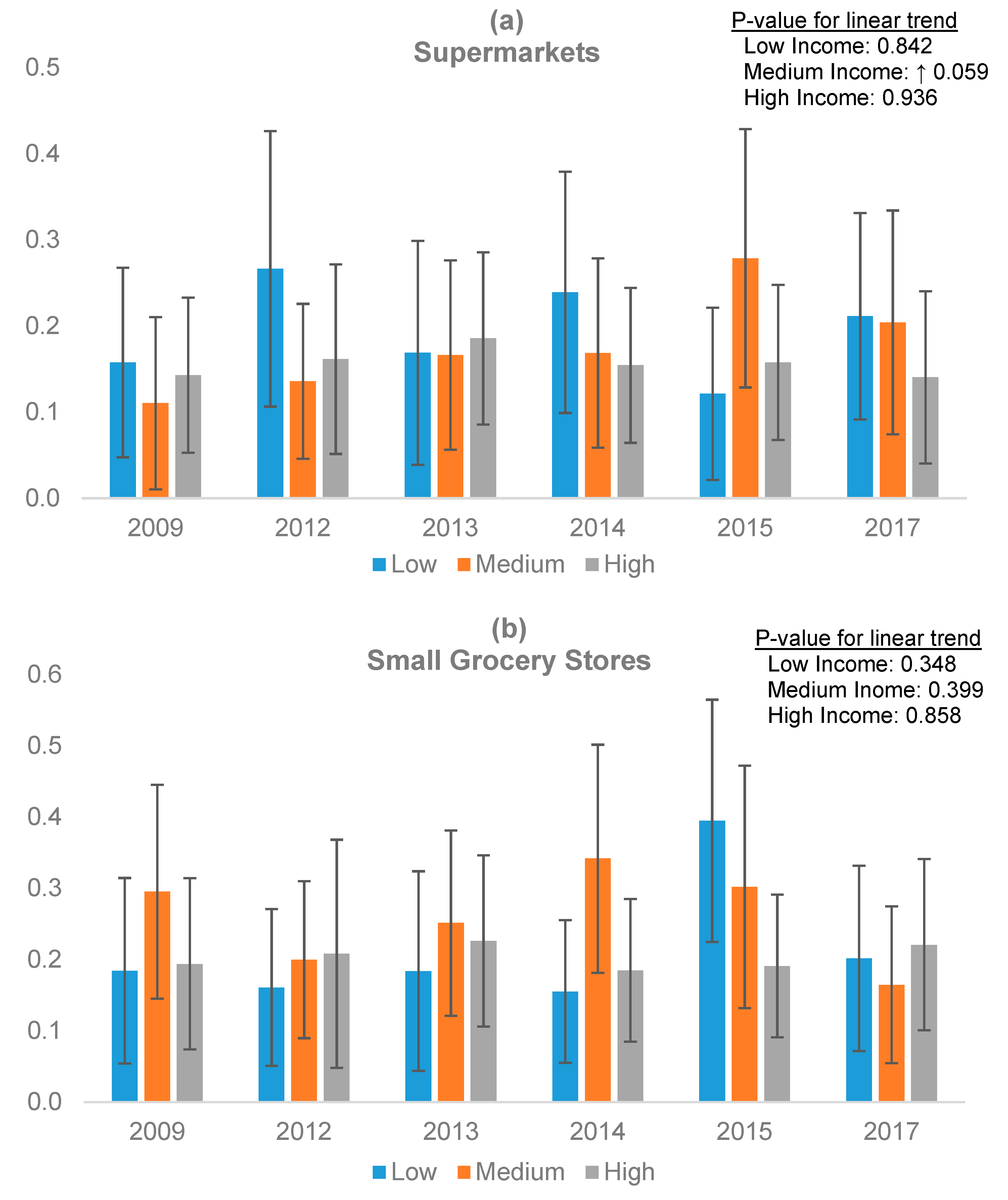 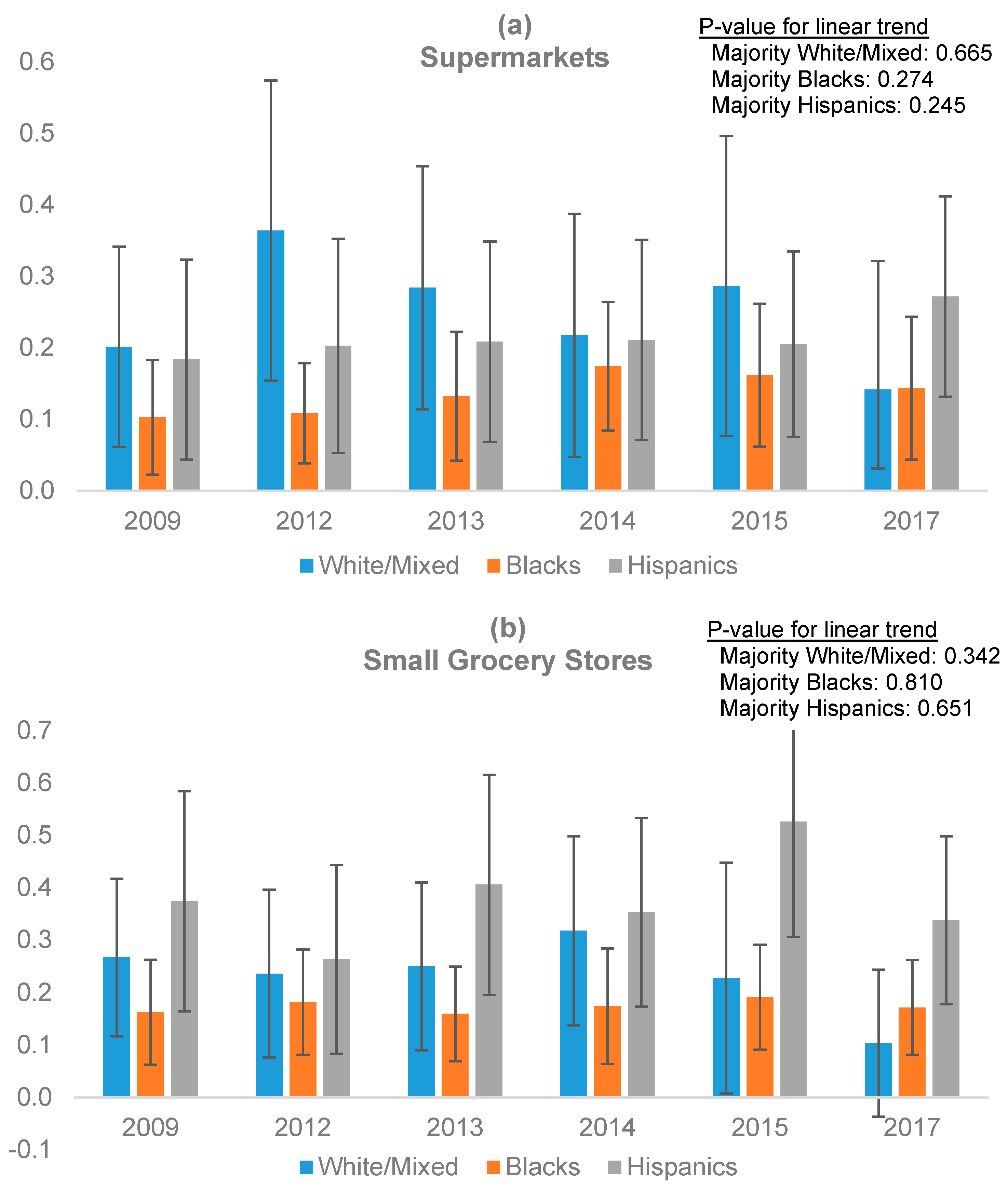