Influence Factors on Injury Severity of Traffic Accidents and Differences in Urban Functional Zones: The Empirical Analysis of Beijing
Next Article in Special Issue

Desiccation cracking is a very common surface soil phenomenon of saline-sodic land. The objective of this study was to investigate the effects of salt content on the spectral reflectance of soil with and without desiccation cracks. To achieve our objective, a cracking test was performed using 17 soil samples. Following the tests, crack parameters were extracted, and correlation analysis was then performed between crack parameters and four soil properties: Na+, salinity (total concentration of ions), pH, and electric conductivity (EC). In order to select the optimum spectral measurement method and develop prediction models, spectral response to different soil properties were compared between the cracked soil samples and the comparative soil samples composed of the 2 mm particle size fraction processed by traditional methods. The results indicate that soil salinity dominated cracking propagation with a positive correlation. Since area and volume scattering are closer to what occurs in the field, a greater spectral response to soil properties was found for cracked soil samples relative to the comparative soil samples in the near-infrared and shortwave-infrared regions. The R2 of optimal linear prediction models based on the cracked soil samples were 0.74, 0.67, 0.58, and 0.67 for Na+, salinity, pH, and EC, respectively.
Keywords: desiccation cracking; saline-sodic soils; soil salinization; spectral response desiccation cracking; saline-sodic soils; soil salinization; spectral response

The Songnen Plain contains one of the three areas in the world with the largest area of saline-sodic soils. The main salt components of NaHCO3 and Na2CO3 make the salt-affected soils in Songnen Plain saline-sodic in nature [38]. The saline-sodic soils generally have a similar clay-loam texture, with the original mineral of quartz and feldspar, and secondary mineral of illite/smectite formation, which have the characteristic of forming cracks when drying [39]. However, the cracking process usually occurred on the soil surface, since the saline soil layer at the depth of 20–80 cm is a typical columnar deposition, which has poor water infiltration properties and prevents downward movement of salt [40,41,42,43]. In this study, 17 soil samples were therefore obtained, from 0 to 20 cm. All the soil samples were collected using a spade within a very narrow area of Da’an City, Songnen Plain, west of Jilin Province, China (123°47’35’’ E to 123°59’55’’ E, 45°29’30’’ N to 45°36’26’’ N). The soil samples were air-dried (temperature of 25 °C, humidity of 35%), ground, passed through a 2 mm sieve, and then divided into three subsamples for independent analysis. The first subsamples were prepared for measurement of soil properties in the laboratory; the second subsamples were prepared as the cracked soil samples undergoing the desiccation cracking test for spectral collection; the third subsamples were completely dried in an oven, and prepared as the comparative soil samples (soil particle size of 2 mm) for spectral collection.

All chemical properties of the soil samples were analyzed in a laboratory. The main ions of interest, Na+, K+, Ca2+, Mg2+, Cl−, HCO3−, and CO32− were extracted using a water extract with a soil–water ratio of 1:5. The Na+ and K+ were measured using a flame photometer; Ca2+ and Mg2+ were analyzed using the EDTA complexometric titration method; Cl− was measured by the AgNO3 titration method; CO32− and HCO3− were measured using the double indicator neutralization method. The soil pH and EC were analyzed with the potentiostatic method and conductometry respectively, using soil suspensions with a soil–water ratio of 1:5. The particle size distributions of the soil samples were also determined using laser diffraction analysis method.

In order to produce crack patterns in the laboratory, saturated slurries were prepared with 80% gravimetric water content. The soils were slurried by hand-mixing, and were poured individually into a box with a size of 50 cm × 50 cm × 3 cm, and the surface was smoothed with a spatula. Afterwards, the soil samples were subjected to controlled laboratory conditions (temperature of 25 °C, humidity of 35% and pressure of 101 kPa) from 11 September 2014 to 3 October 2014, until the desiccation cracking process was completed (all weights of the samples stabilized, Figure 1), and the final water content of all the cracked soil samples were then measured.
A digital camera was installed on a fixed experimental platform to determine the morphologies of the cracked soil samples, and a standard colorimetric plate was used to calibrate the white balance of the camera to reduce the effect of changes in the photographic environment. Digital image processing was then used to extract the characteristics of crack patterns, and the procedure is shown in Figure 2. First, the color photo was cropped and converted to a grayscale image (Figure 2a). Second, the grayscale image was segmented into cracks (white areas) and aggregates (black areas) using a gray threshold after binarization (Figure 2b). Third, a skeletonization algorithm was utilized to repeatedly remove pixels from the boundaries of the cracks, until one-pixel-wide skeletons remained (Figure 2c). After that, the crack length (CL) was determined by counting pixels based on the binary skeletons of the crack patterns, the crack area (CA) was extracted by computing the number of white pixels representing them, and the crack ratio (CR) was also calculated to quantify the cracking extent.

In order to obtain the spectral characteristics, an SVC HR-1024 hand-held spectrometer was used in this experiment. This spectrometer is sensitive to wavelengths between 350 and 2500 nm, and includes three separate detectors; the VNIR (350–1000 nm); the SWIR1 (short-wave infrared 1, 1000–1850 nm); and the SWIR2 (short-wave infrared 2, 1850–2500 nm). The sampling intervals were 1.5 nm with a spectral resolution of 3.5 nm, 3.6 nm with a spectral resolution of 6.5 nm, and 2.5 nm with a spectral resolution of 6.5 nm, for wavelengths 350–1000 nm, 1000–1850 nm, and 1850–2500 nm, respectively.
In this investigation, specific spectral measurements were based on both the cracked soil samples and the comparative soil samples. For the cracked soil samples, a fiber optic with a 25° field of view was held on a fixed platform 1 m above the ground (corresponding to a circle field with a diameter of 45 cm), a 50 cm × 50 cm rectangle region was then determined on the ground to make the center of this region coincide with the lens centerline projection of the fiber optic to ensure that both the zenith angle and the azimuth angle were same for all the cracked soil samples. After that, each cracked soil sample was placed in the rectangle region for spectral measurement. For the 2 mm comparative soil samples, a 4° field of view was chosen 20 cm vertically above the samples. Note that the comparative samples were put separately into the same aluminum boxes with an inner diameter of 10 cm and a depth of 2 cm. For each spectral measurement, 10 readings of spectral reflectance were taken, and the mean of all spectral reflectance was calculated as the actual reflectance of the sample, in order to average out the difference caused by instrument noise. A standard white panel was also measured before each measurement as calibration. In order to diminish the noise of the equipment and reduce the data dimensions, all the spectral reflectance of soil samples was resampled at 10 nm. The reflectance ranges of 1350–1420 nm, 1800–1920 nm, and 2360–2500 nm were cut off for all the spectral measurements, due to the effects of water absorption bands. Considering the sensitivity to the spectral variations and the background noise of reflectance, typical mathematical transformations of reflectance, including the square root (R1/2) and the logarithm (LgR), were computed in this study, and they were then treated together with reflectance as spectral parameters in this study. The spectral reflectance characteristics of soil samples with different crack extents were then analyzed and compared with that of the 2 mm comparative soil samples. Afterwards, the correlation coefficients between the Na+, salinity, pH, EC, and spectral parameters were computed through the whole bandwidth for all the cracked soil samples and the comparative soil samples.

Table 1 presents soil properties for the 17 soil samples. All soils were alkaline, with pH from 8.76 to 10.60, the EC ranges of the soil samples are quite various from 0.09 ds/m to 3.00 ds/m. Na+ is the dominant cation in the soil samples, with a pH >9.5, and Ca2+ and Mg2+ are the main cations with a pH <9.5, while HCO3− is the main anion.
Table 2 shows the soil particle distributions of the soil samples. It can be seen that the range of clay is very small (from 26.28% to 29.37%), that the standard deviation (SD) and the coefficient of variation (CV) are only 1.42 mg/g and 4.36%, indicating that no significant differences were observed in the clay content for the soil samples.

This study performed a desiccation cracking experiment for 17 saline-sodic soil samples with different salinity levels from the Songnen Plain of China. It also compared the spectral response of cracked soil samples to that of 2 mm comparative soil samples for each soil property of interest. Linear regression models were developed for each main soil property through the optimum spectral parameter at the corresponding diagnostic waveband based on the cracked soil samples. The main conclusions in this investigation are as follows:

However, there are still some limitations to be considered before the procedure is used generally to characterize saline-sodic soils. For instance, the effects of background (known as wooden) on spectra were ignored in this study, and the radiation transfer process of energy on the surface of the cracked soil and within the cracked regions was not very clear. Although the results of these experiments are encouraging, the predictive regression models require data verification.

This research was supported by the National Natural Science Foundation of China (No. 41601382, 41671350), the Fundamental Research Funds for the Central Universities of China (No. 2017-KYYWF-0145) and the University Nursing Program for Young Scholars with Creative Talents in Heilongjiang Province of China (No. UNPYSCT-2018180).

The authors are very grateful to Northeastern University for the HR 1024 spectrometer assistance. The authors also would like to thank Zhichun Wang for measurement support of soil properties. 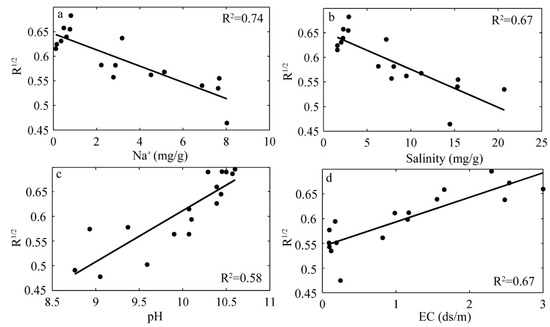