Prevalence of Total Physical Activity, Muscle-Strengthening Activities, and Excessive TV Viewing among Older Adults; and Their Association with Sociodemographic Factors

Physical activity (PA) decreases with age, and interventions are needed to promote PA during adolescence, especially, among those in low-socioeconomic status (SES) areas. The aim of this study was to investigate whether a two-year, empowerment-based health-promotion school intervention had any effects on changes in (a) moderate-to-vigorous PA (MVPA), (b) sedentary time (SED), (c) exercise training (ET) frequency, and (d) ET duration, among adolescents. Participants (aged 12–13 years at baseline) from one intervention school and two control schools, were recruited from a multicultural area of Sweden, characterized by low-SES. During the course of the two-year intervention, a total of 135 participants (43% boys) were included in the study. The intervention was developed and implemented as a result of cooperation and shared decision-making among the researchers and the participants. MVPA and SED were measured with accelerometers, and ET frequency and duration was self-reported at the beginning of the seventh, eighth, and ninth grade, respectively. There were no significant effects of the two-year, empowerment-based health-promotion school intervention on changes in the accelerometer-measured MVPA and SED, or the self-reported ET frequency and duration, among the adolescents. Overall, the intervention was unsuccessful at promoting PA and reducing SED. Several possible explanations for the intervention’s lack of effects are discussed. View Full-Text
Keywords: empowerment; exercise; health promotion; participatory; physical activity; school; sedentary behavior empowerment; exercise; health promotion; participatory; physical activity; school; sedentary behavior
►▼ Show Figures 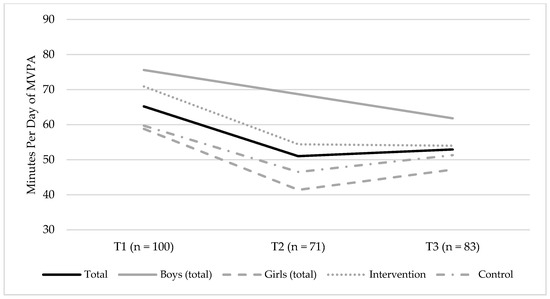