Implementing Low-Cost, Community-Based Exercise Programs for Middle-Aged and Older Patients with Type 2 Diabetes: What Are the Benefits for Glycemic Control and Cardiovascular Risk?

Diabetes was responsible for approximately 5 million deaths worldwide in 2015, representing 14.5% of global, all-cause mortality in people aged 20 to 79 years [1]. Cardiovascular diseases are the leading cause of death and an important cause of morbidity among persons with diabetes, especially due to the increased incidence of coronary artery disease and strokes [2,3].
Physical activity is considered one of the cornerstones of type 2 diabetes (T2D) treatment and control as it is associated with a decreased incidence of cardiovascular disease and a lower all-cause mortality [4,5]. Exercise (physical activity that is planned and structured) seems to promote additional benefits on glycemic control and cardiovascular risk factors compared to daily life physical activity [6,7].
The effects of regular exercise programs developed according to international exercise recommendations (combined aerobic and resistance exercise) [7,8] for patients with T2D on glycemic control and cardiovascular risk factors are very well established [9,10]. However, the majority of intervention studies have developed exercise programs with expensive equipment such as ergometers for aerobic exercise (treadmills, stationary bikes, rowing machines, steppers, and ellipticals) and resistance machines for resistance exercise. Accessing these material resources represents an elevated economic cost in a population already burdened with high health expenditures due to diabetes and related comorbidities treatments. Therefore, these type of facilities are not accessible to most of patients with T2D, especially in community settings such as in primary health care and elderly institutions [11,12].
Community-based exercise programs for groups of individuals with homogeneous characteristics, such as specific age-groups or chronic diseases, are recommended interventions by the World Health Organization [13] to promote physical activity. These types of community interventions seem to have a greater applicability than interventions at the individual level, and are associated with greater long-term compliance in patients with T2D. However these programs typically fail to meet the international physical activity guidelines and/or to use low-cost exercise strategies [14,15].
In order to allocate resources to physical activity interventions, decision-makers need to be informed about the efficacy of these programs in changing health outcomes, especially in regards to diabetes control and decreasing cardiovascular risk.
The published literature still does not answer the question whether these low-cost physical activity interventions are effective at controlling the aforementioned health conditions.
This study aimed to analyze the effects of a long-term, community-based combined exercise program developed with low-cost exercise strategies on glycemic control and major modifiable cardiovascular risk factors in middle-aged and older patients with T2D.

Participants were recruited from a diabetes clinic at a local hospital according to the following inclusion criteria: aged 55 to 75 years; diagnosis of T2D for at least one year; HbA1c less than 10%; pharmacological regimen stabilized for at least three months; major complications of diabetes screened and controlled (diabetic retinopathy, diabetic nephropathy, diabetic foot, and major cardiovascular risk factors); without limitations in gait or balance; independent living in the community; without participation in supervised exercise programs in the last 6 months; non-smokers in the last 6 months; consistent dietary pattern for at least 6 months. Medical Doctors and Nurses identified 170 patients with the eligibility criteria. All agreed to participate in a long term follow-up study. An application for participation in a free of charge, long-term exercise program was opened for these patients. Sixty-eight individuals applied to this program and 60 (30 women and 30 men) were randomly selected to participate (EXE). All other individuals (n = 110), independently of having (n = 8) or not (n = 102) applied to the exercise program, were integrated in the CON.
All participants received instructions to maintain daily-life routines (lifestyle-related physical activity and dietary pattern), and continue with usual care (diabetes consultations at the local hospital and pharmacological regimen) throughout the study’s duration.
Before exercise program engagement, all EXE participants underwent a detailed medical evaluation to screen for relative or absolute contraindications to vigorous intensity exercise, including a maximal treadmill stress test [7,16].
The study’s protocol was approved by the local hospital’s ethics committee in accordance with the Declaration of Helsinki (36/2009). All individuals were informed about the benefits and risks of the research prior to signing an institutionally-approved informed consent document to participate in the study.

Participants were engaged in Diabetes em Movimento which is a community-based exercise program for patients with T2D developed in Portugal [21]. This exercise program was prepared according to the international exercise recommendations for patients with T2D and also the international recommendations on falls prevention. The program involved the combination of aerobic, resistance, agility/balance, and flexibility exercise within each session [8,22]. The program’s sessions were held three times per week on non-consecutive days over nine months and took place in a municipal sports complex (Covilhã, Portugal) equipped with an all-weather running track, lawns, and an exercise room. Only low-cost materials were used such as chairs, water bottles filled with sand (0.5 L; ±0.75 kg), dumbbells (1, 2 and 3 kg), fitness balls, beacons, stakes, shopping baskets, a volleyball portable kit, and sports vests. Exercise sessions were conducted in groups of 30 participants, supervised by an exercise professional and a nurse (both with specific training on exercise-related injuries and adverse events [16]), and lasted about 70 minutes, according to the following structure:
Five different exercise sessions models were prepared. Each of them had different aerobic, resistance, and agility/balance exercises successively applied over time to induce stimuli variability. Exercise sessions were planned to have moderate-to-vigorous intensity (12–17 points on a rate of perceived exertion scale with 6–20 points). Exercise intensity was systematically controlled using Borg’s rate of perceived exertion scale (6–20 points, [23]) and adjusted if necessary during aerobic, resistance, and agility/balance exercise. At the end of each session, all participants were asked to rate the session’s overall intensity. The participant’s attendance, as well as the occurrence of exercise-related injuries and adverse events, was also recorded.
The methods of this exercise program were already tested for their impact on physical fitness (aerobic fitness, muscle strength, agility/balance, and flexibility) in patients with T2D, as previously published by our research team [24]. Moreover, the cost of program implementation was also reported (18.40 €/patient/month; only direct costs, calculated by the health services perspective [25]).

A per-protocol analysis was used in order to assess the efficacy of the program’s specific methods, since the main goal of this study was to test the effects of the low-cost and high-applicability exercises, specifically on diabetes control and cardiovascular risk.
The following exclusion criteria were established during the study period: dropout of the exercise program; adherence to the exercise sessions <65%; participation in other supervised exercise sessions; changes in pharmacological treatment for T2D, hypertension, or dyslipidemia; changes in dietary pattern; accident, illness or surgery with hospitalization; development of pathology with a limitation on the performance of exercise sessions’ activities; and loss of contact with hospital diabetology consultations.
To analyze the effects of the exercise program on HbA1c, FPG, total cholesterol, LDL cholesterol, HDL cholesterol, triglycerides, SBP, DBP, BMI, waist circumference, and the 10-year risk of CAD events, a Split-Plot analysis of variance (time *group) with repeated measures was performed. Partial Eta2 values (η2p) were reported to quantify the effect sizes. To compare HPA (non-supervised) between EXE and CON in the two evaluation moments, Mann–Whitney U tests for independent samples were performed. The level of statistical significance was set at p < 0.05 and data was analyzed with PASW Statistics (version 20, SPSS Inc., Chicago, IL, USA). Data are shown as mean ± standard deviation and as median (interquartile range) for the HPA values.

The results of this study showed that a long-term, community-based, combined exercise program developed with low-cost exercise strategies was effective in inducing significant benefits in glycemic control, lipid profile, blood pressure, anthropometric profile, and the 10-year risk of CAD events in middle-aged and older patients with T2D.

We gratefully acknowledge the participants of the study and Cova da Beira Hospital Centre for the possibility to perform this research. This study was supported by a grant from the Portuguese Foundation for Science and Technology (SFRH/BD/47733/2008). 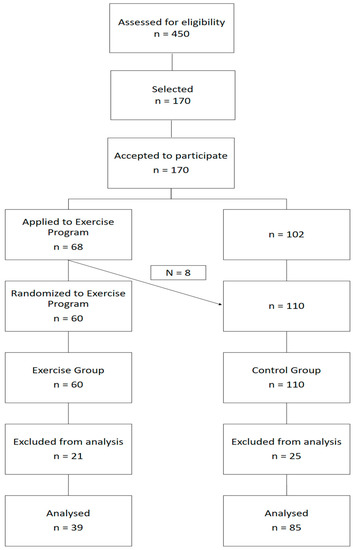 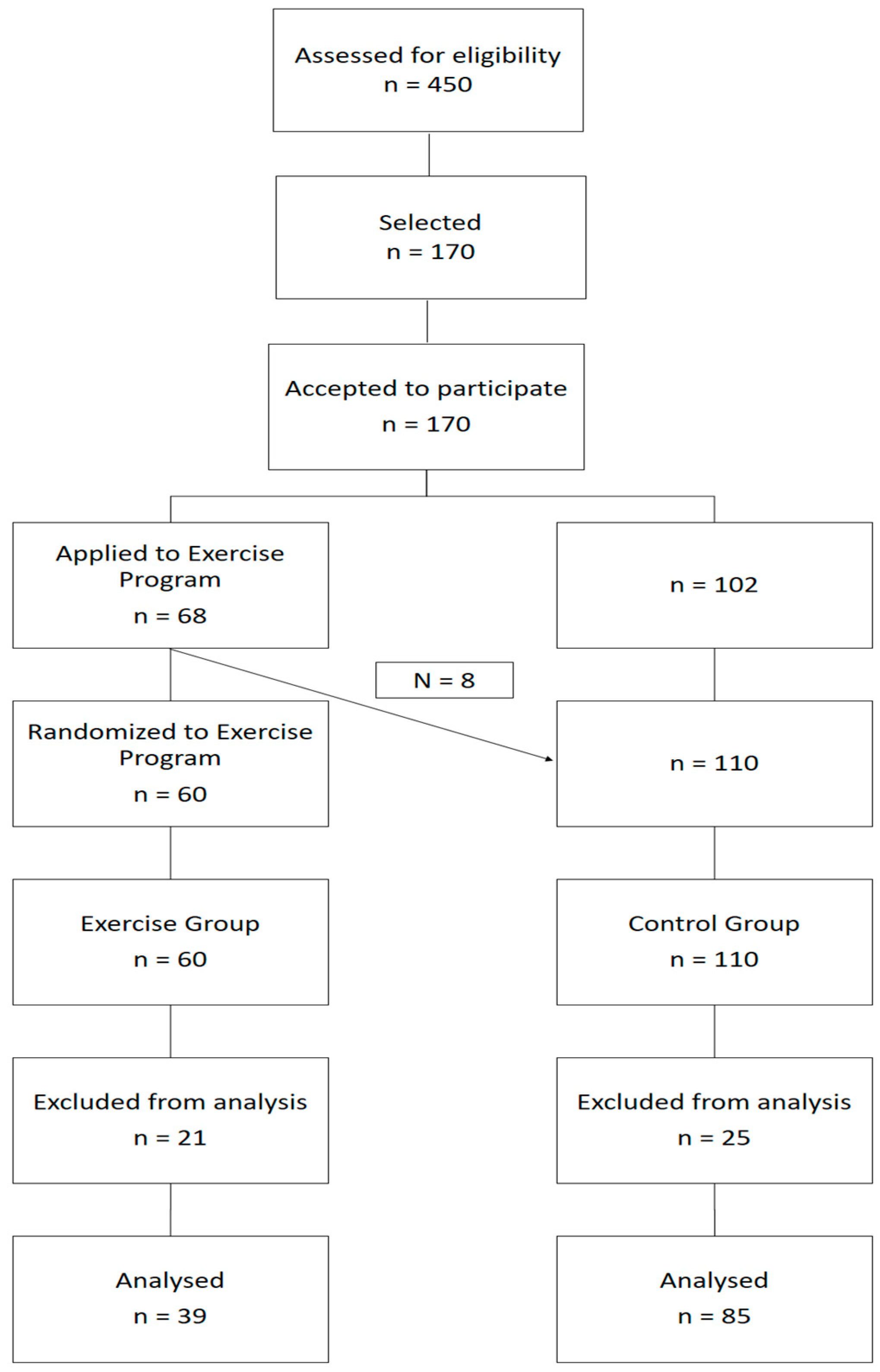