Marine Alkaloids: Compounds with In Vivo Activity and Chemical Synthesis 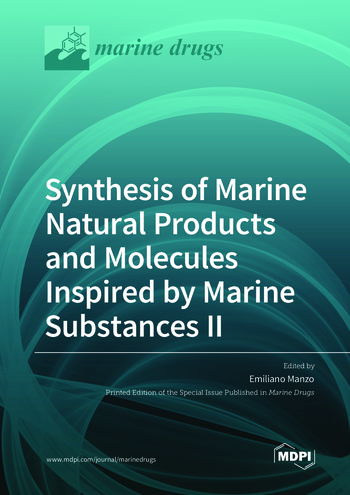 Recent Developments on the Synthesis and Bioactivity of Ilamycins/Rufomycins and Cyclomarins, Marine Cyclopeptides That Demonstrate Anti-Malaria and Anti-Tuberculosis Activity

Ilamycins/rufomycins and cyclomarins are marine cycloheptapeptides containing unusual amino acids. Produced by Streptomyces sp., these compounds show potent activity against a range of mycobacteria, including multidrug-resistant strains of Mycobacterium tuberculosis. The cyclomarins are also very potent inhibitors of Plasmodium falciparum. Biosynthetically the cyclopeptides are obtained via a heptamodular nonribosomal peptide synthetase (NRPS) that directly incorporates some of the nonproteinogenic amino acids. A wide range of derivatives can be obtained by fermentation, while bioengineering also allows the mutasynthesis of derivatives, especially cyclomarins. Other derivatives are accessible by semisynthesis or total syntheses, reported for both natural product classes. The anti-tuberculosis (anti-TB) activity results from the binding of the peptides to the N-terminal domain (NTD) of the bacterial protease-associated unfoldase ClpC1, causing cell death by the uncontrolled proteolytic activity of this enzyme. Diadenosine triphosphate hydrolase (PfAp3Aase) was found to be the active target of the cyclomarins in Plasmodia. SAR studies with natural and synthetic derivatives on ilamycins/rufomycins and cyclomarins indicate which parts of the molecules can be simplified or otherwise modified without losing activity for either target. This review examines all aspects of the research conducted in the syntheses of these interesting cyclopeptides. View Full-Text
Keywords: ilamycins; rufomycins; cyclomarins; tuberculosis; malaria; cyclopeptides; biosynthesis; total synthesis; natural products ilamycins; rufomycins; cyclomarins; tuberculosis; malaria; cyclopeptides; biosynthesis; total synthesis; natural products
►▼ Show Figures 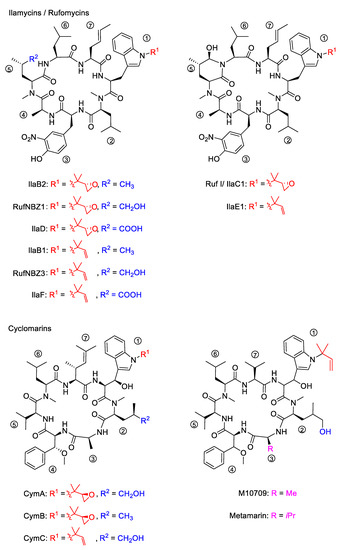 Kazmaier, U.; Junk, L. Recent Developments on the Synthesis and Bioactivity of Ilamycins/Rufomycins and Cyclomarins, Marine Cyclopeptides That Demonstrate Anti-Malaria and Anti-Tuberculosis Activity. Mar. Drugs 2021, 19, 446. https://doi.org/10.3390/md19080446


Kazmaier U, Junk L. Recent Developments on the Synthesis and Bioactivity of Ilamycins/Rufomycins and Cyclomarins, Marine Cyclopeptides That Demonstrate Anti-Malaria and Anti-Tuberculosis Activity. Marine Drugs. 2021; 19(8):446. https://doi.org/10.3390/md19080446


Kazmaier, Uli, and Lukas Junk. 2021. "Recent Developments on the Synthesis and Bioactivity of Ilamycins/Rufomycins and Cyclomarins, Marine Cyclopeptides That Demonstrate Anti-Malaria and Anti-Tuberculosis Activity" Marine Drugs 19, no. 8: 446. https://doi.org/10.3390/md19080446