Chemotherapy represents the most applied strategy for cancer treatment; therefore, development of novel and improved antitumor compounds has become mandatory.
The sustainable exploitation of marine natural products as starting leads is a precious and still untapped resource. Many classes of natural molecules have been conceived by nature to play specific roles in cell processes through selective interactions with key cellular targets. In this frame, quinones represent a clinically relevant class of chemotherapeutic agents with antitumor activity already described in several cell lines [1]. The most prominent chemical feature of these compounds, both natural and synthetic derivatives, is the ability to undergo redox cycling to generate reactive oxygen species (ROS), responsible for significant cell damage. In this class of compounds, a heterogeneous group of prenylated structures formed through the mixed terpenoid-polyketide biosynthetic pathway, stands out for their potential anticancer activities [2,3]. This group of molecules, commonly named meroterpenoids, are broadly widespread in both terrestrial plants, insects, fungi, lichens and marine organisms [4], being involved in electron transport processes and into photosynthesis [5]. Among marine ascidians, these compounds have been found almost exclusively in species belonging to the genus Aplidium. Since the first report of the presence of geranylhydroquinone in an Aplidium sp., a number of structurally diverse meroterpenes have been isolated from several Aplidium species. Among them, a wide variety of often very complex molecules, originating from intra- and intermolecular cyclizations and/or rearrangements of the terpene chains to give unique polycyclic or macrocyclic structures, have been discovered [2,5,6]. In the course of our ongoing research program aimed at the search and characterization of new drug candidates of marine origin [7,8,9,10,11], a large group of new meroterpenes with different polycyclic skeletons but all featuring an unusual 1,1-dioxo-1,4-thiazine ring fused with the quinone moiety, i.e., aplidinones A and B, thiaplidiaquinones and conithiaquinones, were isolated from samples of Aplidium conicum [12,13,14]. The valuable antitumor activity shown by these compounds prompted us to further investigate the chemical and pharmacological features of this class of compounds [15]. For this purpose, several synthetic analogs of aplidinone A (1), featuring a methoxyl group and a monoprenyl alkyl chain linked at the thiazinoquinones scaffold, have been synthetized, in which the geranyl chain is replaced by other alkyl chains [16,17,18,19]. This synthetic chemical library along with the natural metabolite was subjected to cytotoxicity assays and preliminary structure-activity relationships (SAR) studies. This approach allowed us to define that the cytotoxic effects depend on the nature and the length of side chain linked to the benzoquinone ring and, mainly, on its position respect to the dioxothiazine ring.
In order to expand the chemical library and more clearly establish the role of the thiazine ring and of both length and shape of the alkyl side chain on the cytotoxicity, we have synthesized the two prenylated quinones 4 and 5 and we have then converted them into the corresponding thiazinoquinones 6 and 7 (Figure 1). We have then explored their potential effects on viability and proliferation in three different human cancer cell lines, namely MCF-7 (breast adenocarcinoma), Bx-PC3 (pancreas adenocarcinoma), and MG-63 (bone osteosarcoma). We report herein the synthesis, the chemical characterization and the pharmacological profile of compounds 4–7.

The prenylquinones 4 and 5 as well as the relevant thiazinoquinone derivatives 6 and 7 were synthesized using a synthetic protocol previously designed and developed in order to easily produce and enlarge the chemodiversity within the thiazinoquinones library [16,17,18].
In detail, as reported in Scheme 1, the commercially available 1,2,4-trimethoxybenzene (2) has been chosen as the starting material. In the first step, compound 2 was treated with n-BuLi in THF solution; 5-bromo-2-methylpent-2-ene or (E)-1-bromo-3,7-dimethyl-2,6-octadiene were then added, keeping the relevant mixtures at room temperature overnight. Under these conditions, the monoalkylated products, compounds 3-R1 and 3-R2, were obtained with very high yield, following that the introduction of the alkyl residue on 1,2,4-trimethoxy benzene resulted highly selective in the 3-position. Subsequently, each compound 3-R1 and 3-R2 was subjected to an oxidation reaction with cerium ammonium nitrate (CAN) providing the quinones 4 (83%) and 5 (76%), respectively. Previously reported attempts to produce selectively 3-monoprenylated quinones afforded mixtures of monoprenylated compounds together with polyprenylated products [20]. Compound 5 itself had been previously obtained through this different synthetic pathway with an overall low yield (≈ 45%). Our procedure afforded monoprenylated quinone 5 with a total yield of 74%, thus resulting in a great improvement over previous synthesis, and the absence of side products, especially of monoalkylated quinones in different position. Afterwards, the thiazinoquinone-bicyclic system of 6 and 7 was built up by condensation of the quinone ring of compounds 4 and 5 with hypotaurine using salcomine as catalyst. Contrary to what previously occurred during the formation of thiazinoquinone scaffold in other unsymmetrical methoxy-quinones [16,17,18,19], the addition of hypotaurine to prenylbenzoquinones 4 and 5 led to the formation of only one of the two possible regioisomers (Scheme 1). This highly regioselective outcome could be explained by considering the greater steric hindrance of the prenylated side chains of compounds 4 and 5 when compared to other quinones featuring smaller and/or less flexible side chains [16,17,18,19].
The above-reported synthetic strategy is particularly advantageous because it starts from low-cost and commercially available reagents allowing to obtaining several dioxothiazinoquinones in few steps and in very good yields. High purity, more than 99.8%, was easily obtained for quinones 4–5 as well as for thiazinoquinones 6–7 by HPLC; each compound was fully characterized by spectroscopic means (Table 1).
Structures of compounds 4 and 5 were easily defined similar to the spectroscopic resonances (1H and 13C NMR) of the compounds already reported in literature [20]. HRESI-MS data of compounds 6 and 7 indicated that the two compounds had the molecular formulas C14H17O5NS and C19H25O5NS, respectively. Analysis of 1D and 2D NMR spectral data of 6 and 7 (CDCl3) allowed the assignment of all 1H and 13C NMR signals (Table 1) confirming the whole structure of thiazinoquinones 6 and 7, except for the regiochemistry of the 1,1-dioxo-1,4-thiazine ring. Nevertheless, the close correlation between the experimental NMR signals of bicyclic skeleton of compounds 6 and 7 with 13C chemical shift values previously calculated by theoretical means [14,19] for strictly correlated structures was in agreement with the regiochemistry depicted in Figure 1.

2.2. In Vitro Evaluation of Antiproliferative Activity of Quinones 4–7 in Cancer Cell Lines

Aiming to assess antiproliferative activity and structure-activity relationships of synthetic quinones 4–7 in solid tumor models, potential growth inhibitory effects were evaluated in three different human cancer cell lines, namely MCF-7 (breast adenocarcinoma), Bx-PC3 (pancreas adenocarcinoma), and MG-63 (bone osteosarcoma). The cell viability was monitored by a real-time cell analyzer based upon impedance measurements of cells growing on microelectronic sensors (xCELLigence system-ACEA Biosciences, San Diego, CA, USA). Drug-induced cell growth inhibition prompts alterations of electronic impedance, which are expressed as cell index (CI), a unit-less parameter indicative of cell number and morphology.
Quinones 4–7 were initially tested individually at a single dose exposure (10 µM) for 72 h. Real-time monitoring of cell proliferation (Figure 2) unveiled that a) Bx-PC3 cells were the most sensitive cell line and b) quinones were more effective during the first 24 h, which was selected as time point for our following investigations.
Bx-PC3 cells experienced delayed proliferation after exposure to compounds 4, 6, and 7, which were shown to elicit a significant, moderate reduction (approximately 30%) in the slope of the growth curve as compared to the control. On the other hand, MCF-7 and MG-63 cell growth was basically unaffected or slightly delayed after treatment with 4, 6, and 7 (Figure 2A–C,G–I). Notably, compound 5 exerted the highest antiproliferative effect and exhibited a comparable toxicity in all three cell lines, as inducing a substantial decrease of cell index (within the range of 50–60%) and a significant increase in cell doubling time.
In the light of these findings, investigation of structure-activity relationships revealed key structural motifs for maintaining growth inhibitory properties of the molecules under examination. The prenyl chain length appears to be crucial to keep a strong bioactivity profile as addition of a second prenyl unit in 5 improves antiproliferative effects in the tested cell lines as compared to 4. Moreover, the presence of a fused thiazine ring weakens cell viability effects. Indeed, compound 5 resulted to be more active than the relevant thiazinoquinone derivative 7, where C8a and C4a electrophilic sites are embedded in the bicyclic structure of the molecule and, therefore, are not available for potential covalent binding to specific antitumor targets (e.g., ubiquitin-proteasome pathway) [21].
To evaluate the underlying mechanism of antiproliferative effect of compound 5, we examined whether it elicited increased apoptotic cell death in BxPC-3 cancer cells by the annexin V-FITC/PI assay (Figure 3). After 24 h incubation with quinone 5 at concentrations of 5, 10 and 20 µM, pancreatic tumor cells exhibited a slight, although significant, increase of early and late apoptotic cells only at the highest dose tested (20 µM), as compared to the control cells treated with DMSO vehicle. The relatively low number of apoptotic cells (approximately 11% at the highest concentration), suggested a cytostatic rather than a cytotoxic effect shown by the compound 5.
As drug-mediated growth inhibition observed during real time cell analysis did not correlate with enhanced apoptosis, we next performed cell cycle analysis by flow cytometry based on PI staining (Figure 4). A typical G0/G1 cell-cycle arrest was observed in BxPC-3 cells after 24 h treatment with quinone 5 (20 µM), shown by a significant increase in G0/G1 phase cells shifting from 45.7% to 62.8% (p < 0.0001).

3.2. In Vitro Evaluation of Antiproliferative Activity of Compounds 4–7 in Cancer Cell Lines

MCF-7, BxPC-3 and MG-63 cells were purchased from American Type Culture Collection (ATCC, Manassas, VA, USA). MCF-7 and MG-63 cells were cultured in DMEM medium, while BxPC-3 in RPMI medium, at 37 °C in a 5% CO2 humidified atmosphere. DMEM and RPMI media were supplemented with 10% fetal bovine serum, penicillin–streptomycin (100 U/mL), and 2 mM l-glutamine. Cell morphology was monitored by using an inverted optical microscope. Cells were detached with 0.05% trypsin-EDTA to perform in vitro assays.

After treatment with different concentrations (5, 10, and 20 µM) of compound 5, BxPC-3 cells were stained with annexin-V-fluorescein isothiocyanate (FITC) and propidium iodide, using the FITC Annexin V Apoptosis Detection kit I (Becton Dickinson, BD, Franklin, NJ, USA) for flow cytometric detection of apoptotic and necrotic cells. Samples were prepared according to manufacturer’s protocol and three independent experiments were carried out.
For cell cycle analysis of BxPC-3 cells treated with 20 µM of quinone 5 for 24 h, pancreatic cancer cells were permeabilized with 70% cold ethanol for 1 h and stained for 30 min with a solution containing 50 µg/mL propidium iodide (Sigma Aldrich, St. Louis, MO, USA) and 10 µg/mL RNase A (EuroClone S.p.a., Pero, MI, Italy) in calcium and magnesium-free PBS. Four independent experiments were carried out. All samples were acquired by NAVIOS flow cytometer and analysed by Kaluza software (Beckman Coulter). 10,000 events were acquired for each sample.

The synthesis of the prenylated compounds 4–7, inspired by the marine thiazinoquinone aplidinone A, has been performed through a versatile synthetic protocol, and it represents an example of a successful strategy. In addition, our synthetic procedure resulted in a considerable improvement of the overall yield of 5 with respect to previously reported synthesis [20]. Moreover, the nucleophilic addition of hypotaurine to quinone ring of 4 and 5 to give the thiazinoquinone 6 and 7, respectively, was completely regioselective with respect to condensation with other quinones featuring smaller and /or less flexible side chains [16,17,18,19] indicating a key role of the side chain in the condensation reaction. To assess the anticancer potential and structure-activity relationships of compounds 4–7, we evaluated their effects on cell viability of MCF-7, Bx-PC3, and MG-63 cell lines. The biological assays demonstrated the quinone 5 as the most relevant compound in the series exhibiting a similar extent of toxicity against three different tumor models. Finally, compound 5 exerted cytostatic activity through induction of cell cycle arrest, resulting in a significant segregation of cells into G0/G1 phase at concentration of 20 μM. 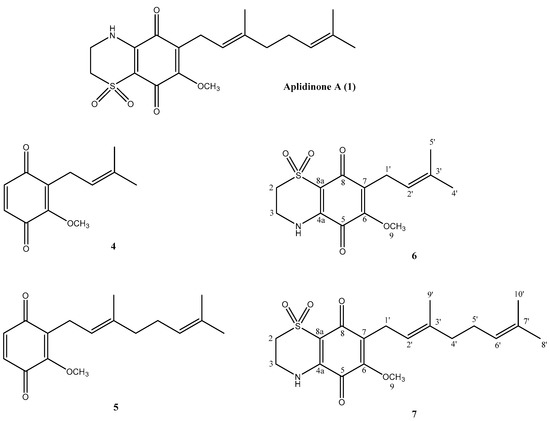 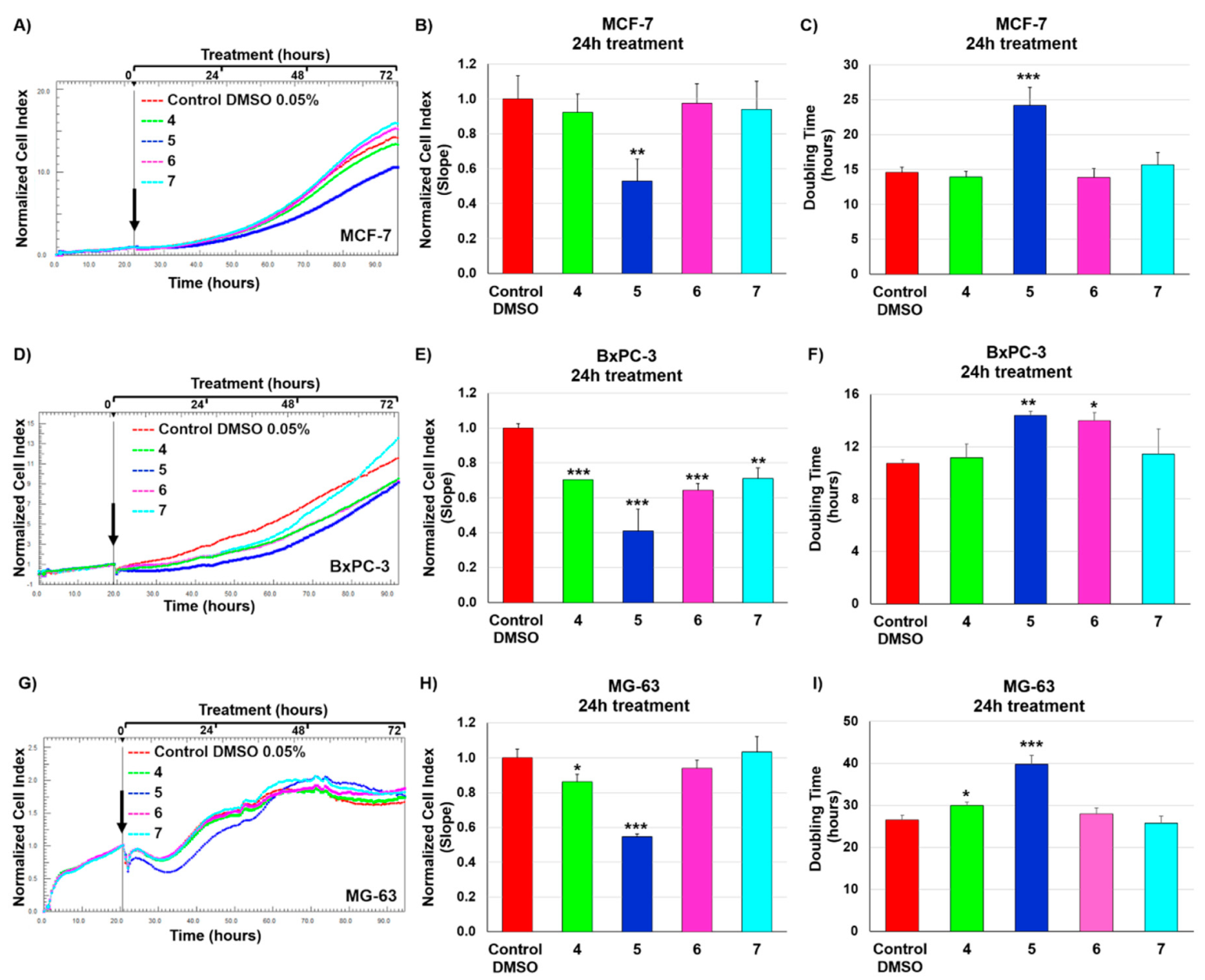