Severe arrhythmias—such as ventricular arrhythmias—can be fatal, but treatment options are limited. The effects of a combined formulation of tetrodotoxin (TTX) and lidocaine (LID) on severe arrhythmias were studied. Patch clamp recording data showed that the combination of LID and TTX had a stronger inhibitory effect on voltage-gated sodium channel 1.5 (Nav1.5) than that of either TTX or LID alone. LID + TTX formulations were prepared with optimal stability containing 1 μg of TTX, 5 mg of LID, 6 mg of mannitol, and 4 mg of dextran-40 and then freeze dried. This formulation significantly delayed the onset and shortened the duration of arrhythmia induced by aconitine in rats. Arrhythmia-originated death was avoided by the combined formulation, with a decrease in the mortality rate from 64% to 0%. The data also suggests that the anti-arrhythmic effect of the combination was greater than that of either TTX or LID alone. This paper offers new approaches to develop effective medications against arrhythmias. View Full-Text
Keywords: Tetrodotoxin; lidocaine; combination preparation; arrhythmia; freeze dried powder Tetrodotoxin; lidocaine; combination preparation; arrhythmia; freeze dried powder
►▼ Show Figures 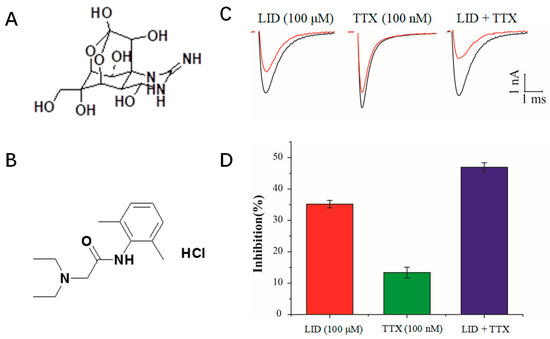