Accumulating evidence demonstrates that dietary supplementation with functional food ingredients play a role in systemic and brain health as well as in healthy ageing. Conversely, deficiencies in calcium and magnesium as a result of the increasing prevalence of a high fat/high sugar “Western diet” have been associated with health problems such as obesity, inflammatory bowel diseases, and cardiovascular diseases, as well as metabolic, immune, and psychiatric disorders. It is now recognized that modulating the diversity of gut microbiota, the population of intestinal bacteria, through dietary intervention can significantly impact upon gut health as well as systemic and brain health. In the current study, we show that supplementation with a seaweed and seawater-derived functional food ingredient rich in bioactive calcium and magnesium (0.1% supplementation) as well as 70 other trace elements, significantly enhanced the gut microbial diversity in adult male rats. Given the significant impact of gut microbiota on health, these results position this marine multi-mineral blend (MMB) as a promising digestive-health promoting functional food ingredient.
Keywords: marine extract; calcium; magnesium; gut microbial diversity; rat marine extract; calcium; magnesium; gut microbial diversity; rat

The increasing prevalence of a high fat/high sugar “Western diet” has been linked to the emergence of multiple health problems such as obesity, inflammatory bowel disease (IBD) [1], as well as cardiovascular [2,3,4], and metabolic diseases [5,6]. Prolonged exposure to this diet has also been associated with multiple vitamin and mineral deficiencies, including magnesium and calcium [7,8]. Across both Europe [9] and the U.S. [10], it has been repeatedly shown that adults are not meeting the recommended daily intake levels of both of these minerals, and more specifically in Ireland, the older population have been demonstrated to be particularly at risk [11]. Deficiencies in magnesium and calcium have been linked with an increased risk of malnutrition, cardiovascular disease [7,12], type 2 diabetes [13], decreased bone mineral density [14,15] and some cancers [16,17]. Conversely, mounting evidence suggest that dietary supplementation with these nutrients has a role to play in a healthy ageing process [8].
A Western diet has also been shown to markedly decrease the diversity of the gut microbiota, which is the population of intestinal bacteria that contribute to healthy gastro-intestinal functioning [18,19]. It also negatively impacts upon the immune system [20], the cardiovascular system [21], the brain, and behaviour [22]. There have been a considerable number of reports in recent years demonstrating that the composition of the microbiome can significantly impact not only an individual’s risk of systemic disease [22,23,24], but also the extent of disease progression [25,26,27,28]. It has been demonstrated that modulating the microbial composition may be a promising therapeutic avenue [29] for cancer [30], auto-immune [31,32], cardiovascular and kidney diseases [33,34]. Growing evidence suggests that modulating the diversity of the gut microbiota through dietary intervention (e.g., consuming a Mediterranean diet) can promote gut health and by extension systemic and brain health [35]. More specifically, several publications have postulated a link between the composition of the gut microbiota and the absorption of key minerals in the body including calcium and magnesium [36,37,38,39].
A seaweed-derived functional food ingredient, which is rich in bioactive calcium and magnesium, as well as 72 other trace minerals (Aquamin-F™), has previously been shown to have anti-inflammatory and other health benefits in terms of bone [40,41] and digestive health [42,43], as well as an ability to lower serum cholesterol levels in humans [44]. The potential benefits of a natural seawater-derived food ingredient (Aquamin-Mg2+™), which provides increased bioavailable magnesium levels for gut health has not yet been studied. The aim of this study was thus to investigate the effects of supplementation of these two functional food ingredients from marine sources (Marine Mineral Blend (MMB)), which in combination provide high levels of bioactive calcium and magnesium (see Table 1), on the diversity of the gut microbiota in adult rats.

2.1. MMB Supplementation Had No Effect on Weight Gain, Food Intake or Locomotor Activity

2.2. MMB Supplementation Increased the Diversity of the Gut Microbiota

Experimental chow was formulated by supplementing standard chow with a 50:50 mix of Aquamin FTM (a mineral-rich food ingredient AquaminTM, Marigot Ltd., Cork, Ireland, FDA GRAS000028; isolated from the red algae Lithoamnion species) and Aquamin-Mg2+TM (enhanced with natural seawater-derived Mg2+) (Marigot Ltd., Cork, Ireland) to give either an additional 1 g magnesium/kg diet (Teklad Global custom diet, Envigo, Indianapolis, IN, USA), which equates to 50 mg magnesium/kg body weight per day; or an additional 2 g magnesium/kg diet, which equates to an additional 100 mg magnesium/kg body weight in an average 40 g rat. The lower-dose paradigm increased the total magnesium content × 1.5 fold, while the higher dose increased the magnesium content × 2 fold compared to the magnesium content in the standard chow. For simplicity, the term Marine Mineral Blend (MMB) is used here to indicate the experimental diets (see Table 1 for the complete mineral profile of MMB). The concentrations of magnesium formulated in MMB to be supplemented into the chow, were based on that used in a previous study which showed increased brain bioavailability of magnesium and associated cognitive functional changes without any adverse effects [67]. All of the mineral concentrations in the chow were approved by a nutritionist for safe consumption by rats (Envigo, USA).
Adult male Sprague Dawley rats (approximately 7–8 weeks of age, Envigo, Ely, UK) were maintained on a 12 h:12 h light: dark cycle (lights on at 08.00 h) under regulated temperature (21 ± 2 °C) and humidity (30–50%), with food and water available ad libitum. Animals were randomly divided into three groups and group housed with access to either standard rat chow (n = 10), 0.1% MMB-supplemented chow (n = 10) or 0.2%-supplemented MMB (n = 10). Animals were allowed free access to either control or MMB diets for 6 weeks before assessment of general locomotor activity in the open field. Body weight and food intake were recorded on a weekly basis for the duration of the study. Food intake was recorded as that in the last week of the experiment expressed as a percentage of total food intake of the first week of the experiment. The caecal content was collected at sacrifice after 6 weeks of dietary supplementation. All experiments were conducted in accordance with the European Directive 2010/63/EU, under an authorisation issued by the Healthcare Products Regulatory Authority Ireland (HPRA, AE19130/P021) and approved by the Animal Ethics Committee of University College Cork.

Animals were placed in a white, round arena (90 cm in diameter) and their behaviour was recorded for 10 min. Motor activity including distance and velocity travelled were measured using Ethovision XT software (Version 11, Noldus, Leesburg, VA, USA). The apparatus was cleaned with 70% ethanol between each test to remove odour cues. One week after the open field test was carried out, animals were culled by decapitation. Caecal contents were snap frozen and stored at −80 °C until processing.

SCFA analysis was performed as previously described [72] with some modifications. Approximately 0.2 g caecal content was mixed with 1.5 mL acidified Milli-Q water, this was vortexed well for 5–10 min and allowed to stand for 10 min at room temperature. The sample was then centrifuged at max speed for 5 min and the supernatant was filtered into fresh Eppendorfs using 0.2 μm filters. The filtered supernatant was then added to 10 mmol/L of internal standard (2-ethylbutyric acid (2-ETBA)). This was vortexed and centrifuged for 3 min before it was added to a fresh vial containing an insert. Samples were run in duplicate. Standard solutions containing 10.0, 8.0, 4.0, 2.0, 1.0, 0.5 and 0.1 mmol/L of a fatty acid mix containing iso-valeric acid, valeric acid, acetic acid, propionic acid, iso-butyric acid and butyric acid were used for calibration. The concentration of SCFA was measured using a Varian 3800 GC flame-ionisation system (Aquilant, Dublin 22, Ireland), fitted with a ZB-FFAP column (30 m × 0.32 mm × 0.25 μm; Phenomenex, Cheshire, UK). Helium was used as the carrier gas at a flow rate of 1.3 mL/min. The initial oven temperature was 100 °C for 0.5 min, raised to 180 °C at 8 °C/min and held for 1 min, then increased to 200 °C at 20 °C/min, and finally held at 200 °C for 5 min. The temperatures of the detector and injector were set at 250 °C and 240 °C, respectively. Peaks were integrated by using the Varian Star Chromatography Workstation version 6.0 software. Standards were included in each run to maintain the calibration.

All data were analyzed using either Statistica (Version 11, Statsoft, OK, USA) or R-3.3.1 ([77], accessed online) and graphed using GraphPad Prism (Version 5, La Jolla, CA, USA). Data are expressed as mean ± the standard error of the mean (SEM). Data were tested for normality, and statistical analysis was performed using one-way ANOVA for parametric data or Kruskal-Wallis for nonparametric data, followed by a post-hoc Dunn’s test if the ANOVA indicated significance. Differences were considered significant at p < 0.05. The vegan package was used for Bray-Curtis based MDS analysis, and the Adonis function in vegan was used for PERMANOVA in beta diversity. The Kruskal-Wallis test was used to identify significant differences between the groups, and the p-values were adjusted using the Benjamini-Hochberg method (FDR < 0.05).

This research was funded by Science Foundation Ireland grant number 14/ADV/IA5371 and SFI/12/RC/2273, and by the Seventh Framework Programme, European Union grant number 613979.

We thank Cara Hueston, Valeria Felice and Clinical Microbiomics, Denmark for assistance with these experiments and Marigot Ltd. for providing the marine mineral products.

Denise M. O’Gorman is an employee of Marigot Ltd. Her role was to provide product knowledge about the functional food ingredient. All other authors declare no conflict of interest. 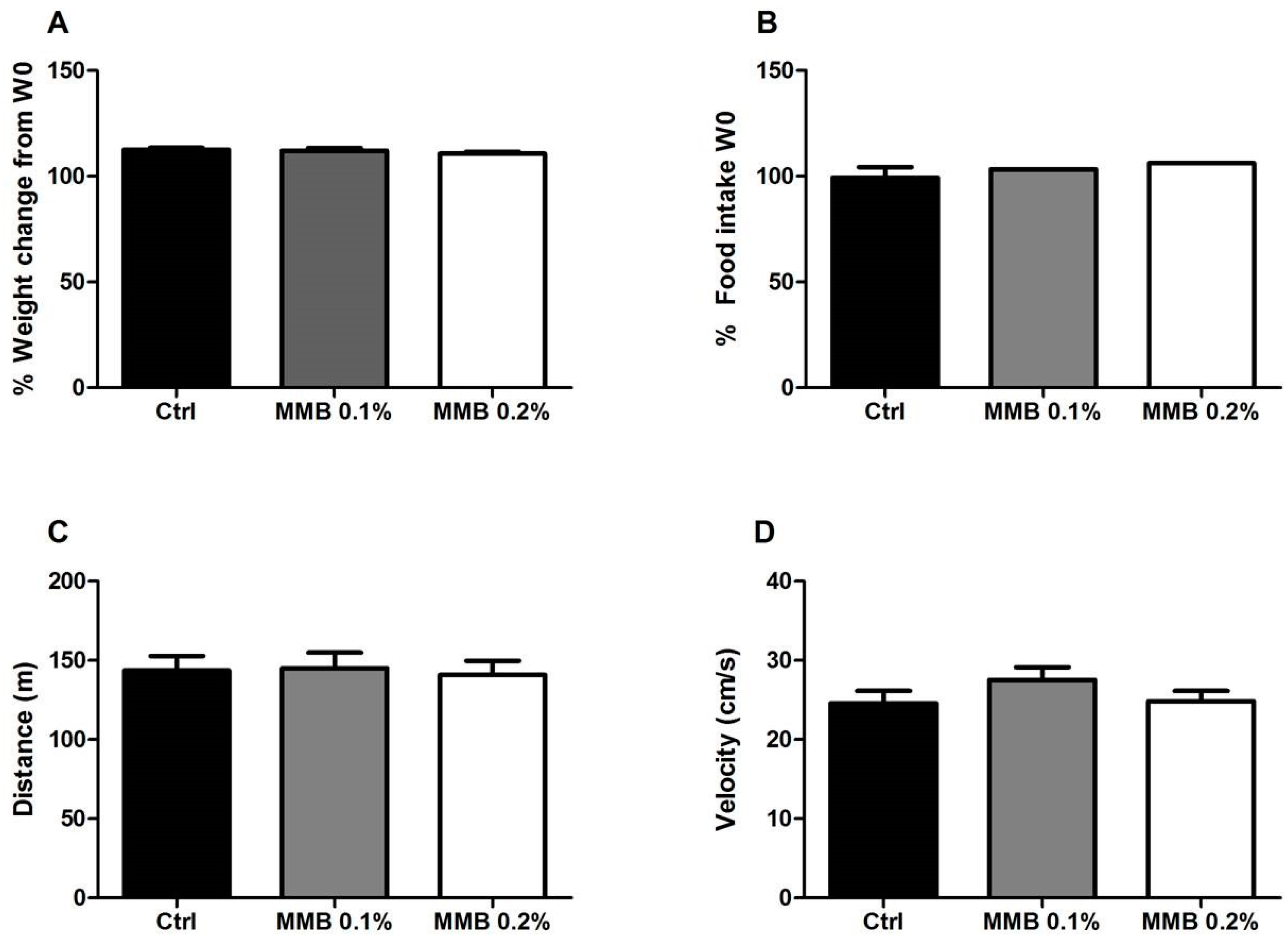 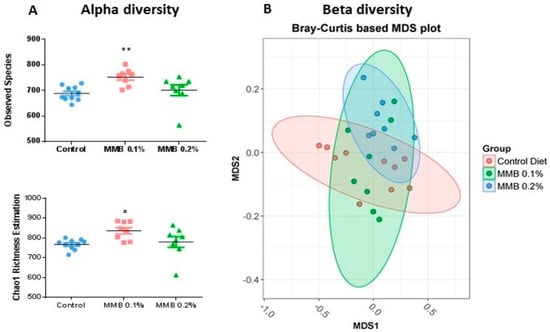 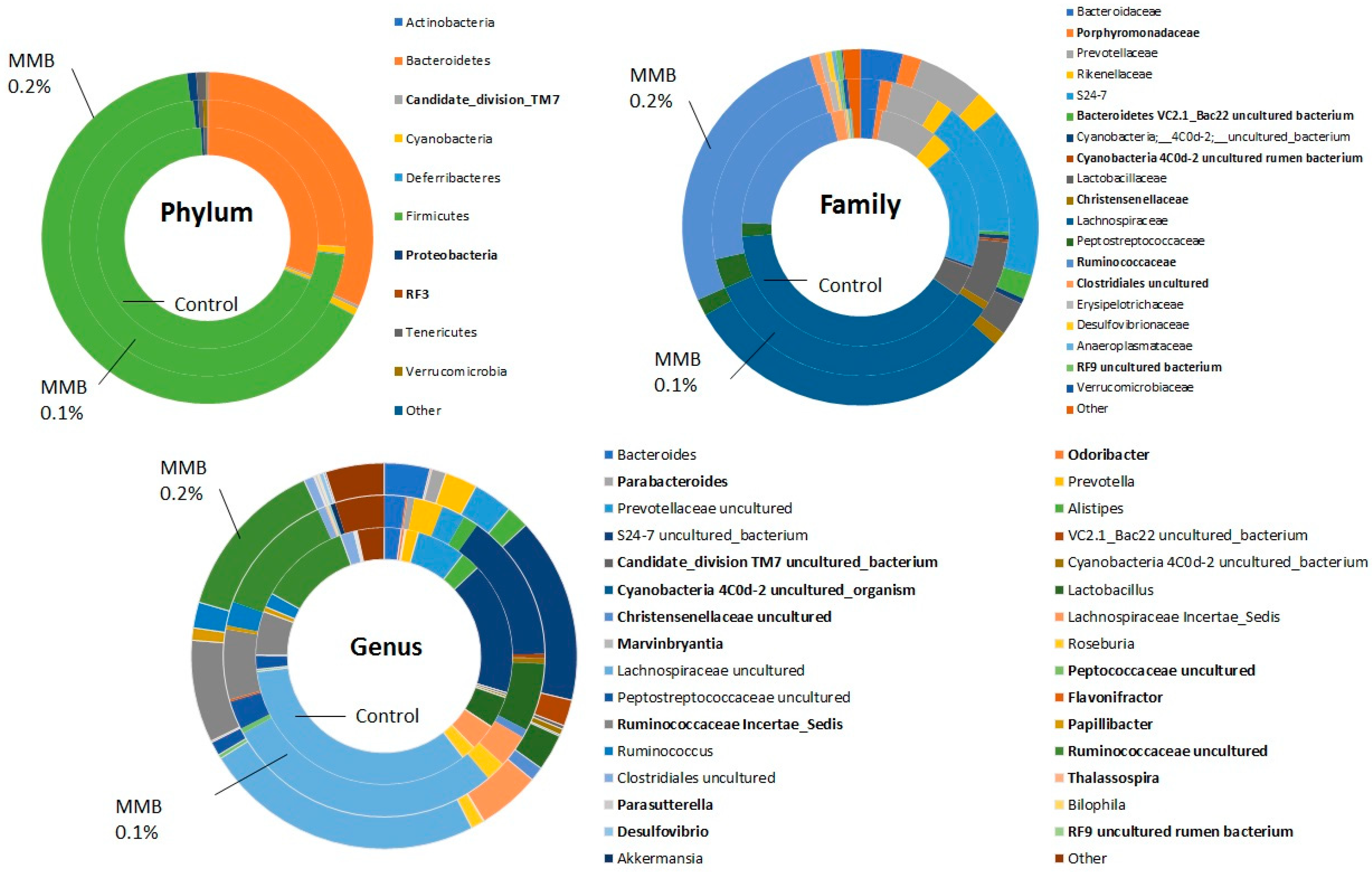 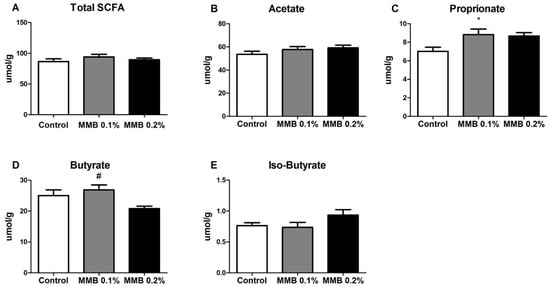 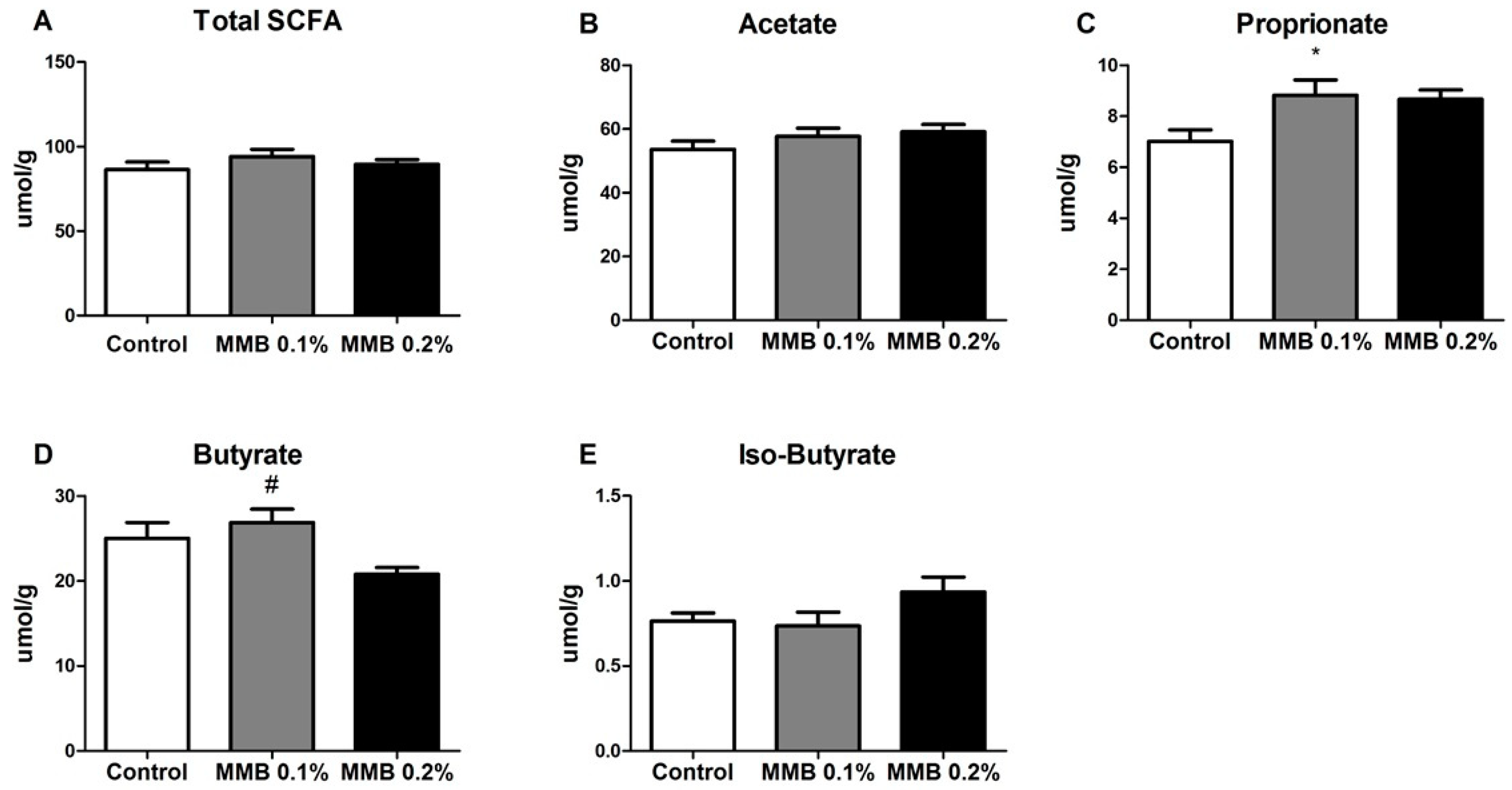