GO-Y078, a Curcumin Analog, Induces Both Apoptotic Pathways in Human Osteosarcoma Cells via Activation of JNK and p38 Signaling

Osteosarcoma is the most common primary bone malignancy in teenagers and continues to confer a generally poor prognosis due to its highly metastatic potential. Poor solubility in water and instability of curcumin limits its bioavailability for use in the adjuvant situation to improve the prognosis and the long-term survival of patients with osteosarcoma. To further obtain information regarding the apoptosis induced by a new curcumin analog, GO-Y078, in human osteosarcoma cells, flow cytometric analysis, annexin V-FITC/PI apoptosis staining assay, human apoptosis array, and Western blotting were employed. GO-Y078 dose-dependently decreased viabilities of human osteosarcoma U2OS, MG-63, 143B, and Saos-2 cells and induced sub-G1 fraction arrest and apoptosis in U2OS and 143B cells. In addition to the effector caspase 3 and poly adenosine diphosphate-ribose polymerase, GO-Y078 significantly activated both initiators of extrinsic caspase 8 and intrinsic caspase 9, whereas cellular inhibitors of apoptosis 1 (cIAP-1) and X-chromosome-linked IAP (XIAP) in U2OS and 143B cells were significantly repressed. Moreover, GO-Y078 increased phosphorylation of extracellular signal-regulated protein kinases (ERK)1/2, c-Jun N-terminal kinases (JNK)1/2, and p38 in U2OS and 143B cells. Using inhibitors of JNK (JNK-in-8) and p38 (SB203580), GO-Y078′s increases in cleaved caspases 8, 9, and 3 could be expectedly suppressed, but they could not be affected by co-treatment with the ERK inhibitor (U0126). Altogether, GO-Y078 simultaneously induces both apoptotic pathways and cell arrest in U2OS and 143B cells through activating JNK and p38 signaling and repressing IAPs. These findings contribute to a better understanding of the mechanisms responsible for GO-Y078′s apoptotic effects on human osteosarcoma cells. View Full-Text
Keywords: GO-Y078; osteosarcoma; apoptosis; JNK GO-Y078; osteosarcoma; apoptosis; JNK
►▼ Show Figures 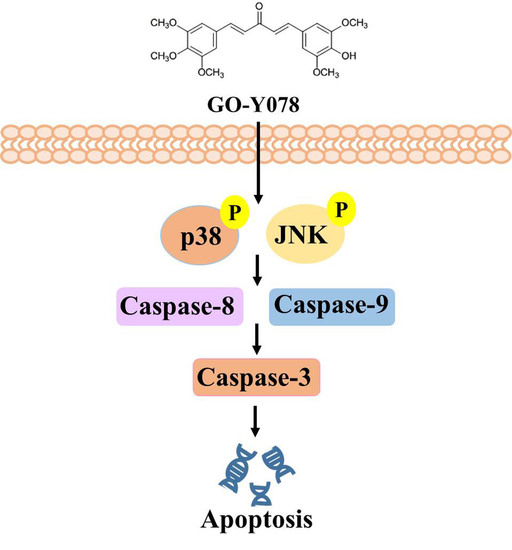