Background: Tamoxifen (TAM) is an estrogen-receptor antagonist, widely used in the adjuvant treatment of early stage estrogen-sensitive breast cancer. Several studies have revealed new biological targets of TAM that mediate the estrogen receptor independent activities of the drug. Recently, the antiviral activity of TAM on replication of human immunodeficiency virus (HIV), hepatitis C virus (HCV) and Herpes simplex virus (HSV-1) in vitro was described. In the current study, we aimed to investigate the effect of TAM on infection with vesicular stomatitis virus (VSV). Methods: Vero cells were treated with different concentrations of TAM for 24 h and then infected with VSV. Additionally, C57BL/6 mice were pretreated with 4 mg TAM, one day and three days before infection with VSV. Results: Treatment of Vero cells with TAM suppressed the viral replication of VSV in vitro and in vivo. The inhibitory effect of TAM on VSV replication correlated with an enhanced interferon-I response and stimulation of macrophages. Conclusions: TAM was identified as being capable to protect from VSV infection in vitro and in vivo. Consequently, this antiviral function (as an advantageous side-effect of TAM) might give rise to new clinical applications, such as treatment of resistant virus infections, or serve as an add-on to standard antiviral therapy. View Full-Text
Keywords: tamoxifen (TAM); vesicular stomatitis virus (VSV) infection; antiviral activity; interferon tamoxifen (TAM); vesicular stomatitis virus (VSV) infection; antiviral activity; interferon
►▼ Show Figures 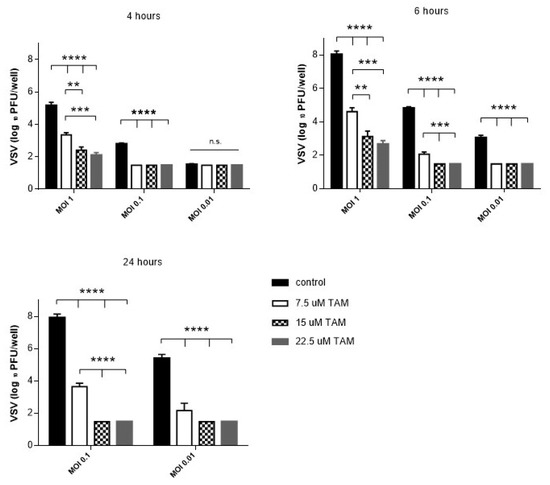