David B. Jackson
2 and

The development of monoclonal antibodies has dramatically changed the outcome of patients with non-Hodgkin’s lymphoma (NHL), the most common hematological malignancy. However, despite the satisfying results of monoclonal antibody treatment, only few NHL patients are permanently cured with single-agent therapies. In this context, radioimmunotherapy, the administration of radionuclides conjugated to monoclonal antibodies, is aimed to augment the single-agent efficacy of immunotherapy in order to deliver targeted radiation to tumors, particularly CD20+ B-cell lymphomas. Based on evidence from several trials in NHL, the radiolabeled antibodies 90Y-ibritumomab tiuxetan (Zevalin, Spectrum Pharmaceuticals) and 131I-tositumomab (Bexxar, GlaxoSmithKline) received FDA approval in 2002 and 2003, respectively. However, none of the two radioimmunotherapeutic agents has been broadly applied in clinical practice. The main reason for the under-utilization of radioimmunotherapy includes economic and logistic considerations. However, concerns about potential side effects have also been raised. Driven by these developments, we performed retrospective analysis of adverse events reporting Zevalin or Bexxar, extracted from the FDA’s Adverse Event Reporting System (FAERS) and the World Health Organization’s VigiBase repository. Our results indicate that the two radioimmunotherapeutic agents have both related and distinct side effect profiles and confirm their known toxicological considerations. Our work also suggests that computational analysis of real-world post-marketing data can provide informative clinical insights. While more prospective studies are necessary to fully characterize the efficacy and safety of radioimmunotherapy, we expect that it has not yet reached its full therapeutic potential in modern hematological oncology.
Keywords: non-Hodgkin’s lymphoma; radioimmunotherapy; 90Y-ibritumomab tiuxetan (Zevalin), 131I-tositumomab (Bexxar), FDA’s Adverse Event Reporting System (FAERS), VigiBase non-Hodgkin’s lymphoma; radioimmunotherapy; 90Y-ibritumomab tiuxetan (Zevalin), 131I-tositumomab (Bexxar), FDA’s Adverse Event Reporting System (FAERS), VigiBase

The development and introduction of monoclonal antibodies in clinical practice have constituted a true revolution in the management of non-Hodgkin’s lymphoma (NHL), the most frequent hematologic malignancy. CD20, a transmembrane calcium channel protein, represents the most common target antigen for monoclonal antibody therapy, since it is expressed at high density on most B-cell lymphomas [1]. Rituximab was the first monoclonal antibody approved by the U.S. Food and Drug Administration (FDA) in 1997, for the treatment of relapsed or refractory, low-grade (indolent) or follicular, CD20+ NHL. Rituximab is directed against the CD20 antigen and exerts its antitumor effect by activation of antibody-dependent cell-mediated cytotoxicity through complement activation and induction of apoptosis [2]. However, despite the satisfying results of monoclonal antibody treatment, only few patients are permanently cured with single-agent therapy: fewer than half of follicular NHL patients respond to Rituximab with median response duration of about a year, since they may not respond or may develop resistance to antibody therapy [3,4].
Radioimmunotherapy represents an attempt to augment the single-agent efficacy of this therapeutic approach in NHL by conjugating therapeutic radionuclides to the monoclonal antibodies in order to deliver radiation to these tumors [5], which are known to be more radiosensitive than solid tumors and other types of cancer [6,7,8,9]. The mechanism of action of radioimmunotherapy on tumor cells involves a combination of the antibody-stimulated cytolysis and induction of apoptosis, with the ionizing radiation emitted from the radioisotope, which generates free radicals leading to cellular damage. Moreover, due to the “crossfire” radiation effect, adjacent tumor cells that do not bind the antibody may still be killed [5].
The radiolabeled antibodies 90Y-ibritumomab tiuxetan (Zevalin; Spectrum Pharmaceuticals) and 131I-tositumomab (Bexxar; GlaxoSmithKline) received FDA approval in 2002 and 2003, respectively, based on impressive results from several trials [10,11,12,13]. Zevalin was initially approved for treatment of patients with relapsed or refractory low-grade, follicular B-cell NHL, including patients with Rituximab-refractory follicular NHL. In 2014, it received expanded approval to include the first-line consolidation therapy of NHL patients following initial treatment with front-line chemotherapy; this approval was based on the results of a randomized multicenter phase III trial involving 414 patients with newly diagnosed advanced follicular lymphoma [14]. Bexxar was also approved for the treatment of relapsed, refractory, and transformed indolent lymphomas.
Despite the proven efficacy of radioimmunotherapy, not only in the relapsed/refractory setting but also in newly diagnosed patients with high response rates and durable remissions [14,15,16,17,18], this treatment modality has failed to be widely adopted by the hematooncology community. As a result, this led to commercial failure of the two products, reaching its nadir in 2014 with the discontinuation of U.S. production of Bexxar due to decreasing sales of the agent [4,19].
Although economic and logistic considerations have played a key role in the underuse of radioimmunotherapy, concerns about potential side effects related to radiation exposure, particularly the development of myelodysplastic syndrome (MDS) and acute myeloid leukemia (AML), have also been raised [4]. Driven by these developments, we sought to characterize the safety profile of this treatment modality based on accessible sources of real-world data. For this reason, adverse events (AEs) of patients receiving Zevalin or Bexxar reported in the FDA’s Adverse Event Reporting System (FAERS) and in the World Health Organization’s (WHO) global Individual Case Safety Report (ICSR) database (VigiBase) were extracted and analyzed.

We profiled Bexxar and Zevalin AEs by extracting data from the FAERS (incl. 2017Q2) and VigiBase (incl. 2018Q2) repositories.

The public FAERS dataset contained 7.9 million cases and held records regarding the patients’ treatments (medications), the indications of those treatments (disease or condition), and the observed reactions and outcomes (e.g., “death” or “hospitalization”) reported in these AEs. To compensate for ambiguities introduced by the non-standardized use of drug names [20], FAERS free-text medication descriptions were consolidated via a stepwise process that matched each name to standardized dictionaries [21]. Indications and reactions, coded by FAERS in terms from the Medical Dictionary for Regulatory Activities (MedDRA), were analyzed at the Preferred Term (PT) level (i.e., MedDRA Level 4 descriptions). Similarly, we processed the VigiBase dataset that held 17095324 AE cases.

From each dataset (FAERS, VigiBase), we extracted two separate AE cohorts for Bexxar and Zevalin, respectively defined as follows:
For the statistical characterization of the cohorts, we employed the proportional reporting ratio (PRR) metric, an established measure of disproportionality in pharmacovigilance for the evaluation of signals generated from spontaneous reporting data [22]. PRRs were computed using the approach described by van Puijenbroek et al. [23].
Each cohort was characterized with respect to the occurrence of drugs, outcomes, indications and reactions reported in the respective AEs. We also considered relevant statistical significance reflected by Fisher’s exact test p-values (two-tailed). In this study, we considered statistical significance indicated by a p-value of 5% or lower (i.e., when p-value < 0.05). To structure the statistical analysis, each cohort’s AEs were compared against the remaining respective dataset’s AEs (whether FAERS or VigiBase) during the calculation of PRR and Fisher’s exact test scores.
Results for each cohort are summarized in the Supplementary Material file: results per cohort list the observed case counts (i.e., number of AEs that a certain occurrence was observed in each cohort), percentage of occurrence within each cohort’s cases, and the respective PRR disproportionality scores and Fisher’s test p-values. The Supplementary Material file contains all observations for consideration by the community, irrespective of their PRR or Fisher’s exact test signals.

Our dataset consisted of AEs extracted from FAERS and VigiBase that reported use of Bexxar or Zevalin. As expected, ‘non-Hodgkin’s lymphoma’, as well as other PTs describing—more or less specific—forms of lymphoma were reported as treatment indication in the vast majority of the reported cases in all cohorts (see Supplementary Material file). With the exception of three patient cases, where both drugs have been co-reported—most likely in succession one after the other—Zevalin and Bexxar were not reported in the same AEs. The most frequent medication reported with Zevalin was Rituximab, mentioned in 70% of its FAERS AEs. In comparison, Rituximab was mentioned only in 15% of Bexxar’s AEs in FAERS.
The identified AE trends were likely reflective of clinical usage trends (Figure 1), including the decreasing course of their use during the last years. Despite the certain collection lag existing in the capture of respective AEs, the historical timeline portrays both the initial increase that followed the agents’ FDA approvals as well as their decline, particularly for Bexxar. Zevalin’s temporary increase after 2014 probably represents its indication expansion to include the first-line consolidation therapy of NHL patients following initial treatment with front-line chemotherapy.
Overall, FAERS and VigiBase contained similar adverse reaction profiles for each radioimmunotherapeutic agent. Table 1 juxtaposes key patient outcomes reported in the respective radioimmunotherapeutic agent cohorts.

Next, side effect profiles for those cohorts were extracted: Table 2, Table 3, Table 4 and Table 5 summarize up to the thirty most frequently reported reactions in each cohort, described in MedDRA PTs (i.e., level 4 terms). The following PTs did not reflect drug-induced effects and were therefore excluded from these tables, whenever mentioned: ‘Disease progression’, ‘Malignant neoplasm progression’, ‘Drug ineffective’, ‘Stem cell transplant’, ‘Non-Hodgkin’s lymphoma’, ‘Death’.

In both datasets (FAERS, VigiBase), cytopenias were the most commonly reported reactions with Zevalin (Table 2 and Table 3). More specifically, ‘thrombocytopenia’, and ‘neutropenia’ were the most frequent reaction PTs, followed by ‘leukopenia’ and ‘pancytopenia’. Among the most frequently reported reaction PTs there were only few infusion related terms (such as urticaria, hypotension, angioedema, hypoxia, bronchospasm, or cardiogenic shock), with the exception of ‘dyspnea’ that was reported in 2.1% of the VigiBase Zevalin cohort. Reaction PT ‘pyrexia’ had a somewhat increased PRR (3.4 in FAERS, 1.4 in VigiBase) and even though it might represent an infusion related reaction, it could also occur in the context of an infection or inflammation. ‘Sepsis’, ‘febrile neutropenia’ and a variety of infections and inflammations (including ‘mucosal inflammation’) were also often reported with the agent and had increased PRR scores. Interestingly, reaction PT ‘Meningitis tuberculous’ had a very high PRR signal in both Zevalin datasets. Among the reaction PTs with high PRR signals were also ‘Myelodysplastic syndrome’ (MDS) and ‘acute myeloid leukemia’ (AML). MDS was reported in 6.9% and 6.1% of the corresponding FAERS and VigiBase cohorts, while AML was reported in 3.6% and 2.9% of the respective FAERS and VigiBase Zevalin cohorts.

We investigated the toxicological profile of radioimmunotherapeutic agents on NHL, by performing a retrospective analysis of AE cases of patients receiving Zevalin or Bexxar, reported in FDA’s FAERS and WHO’s VigiBase repositories. Overall, our results recapitulate known side effects observed with radioimmunotherapy and confirm cytopenias, infections, inflammations, infusion reactions, as well as MDS and AML as some of the main patient safety concerns. The present work also suggests that computational analysis of real-world patient outcome data can provide informative insights in the field of the toxicological profiling of therapeutic agents. While such analytics can certainly benefit from the consideration of additional clinical information, we also call for more studies required to characterize the efficacy and safety of radioimmunotherapy in NHL.

This research received no funding.

We would like to thank the reviewers for their constructive comments.

The authors declare no conflict of interest. D.B.J. and T.G.S. are employees of Molecular Health GmbH and have patent applications associated with the analysis of adverse event data. 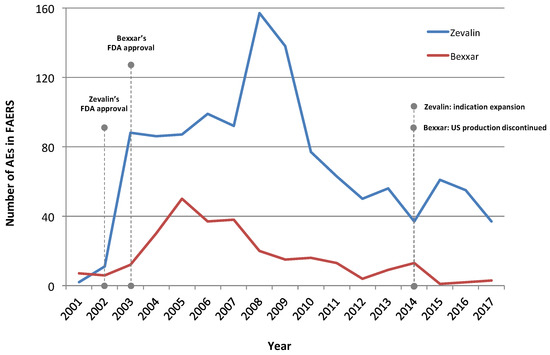 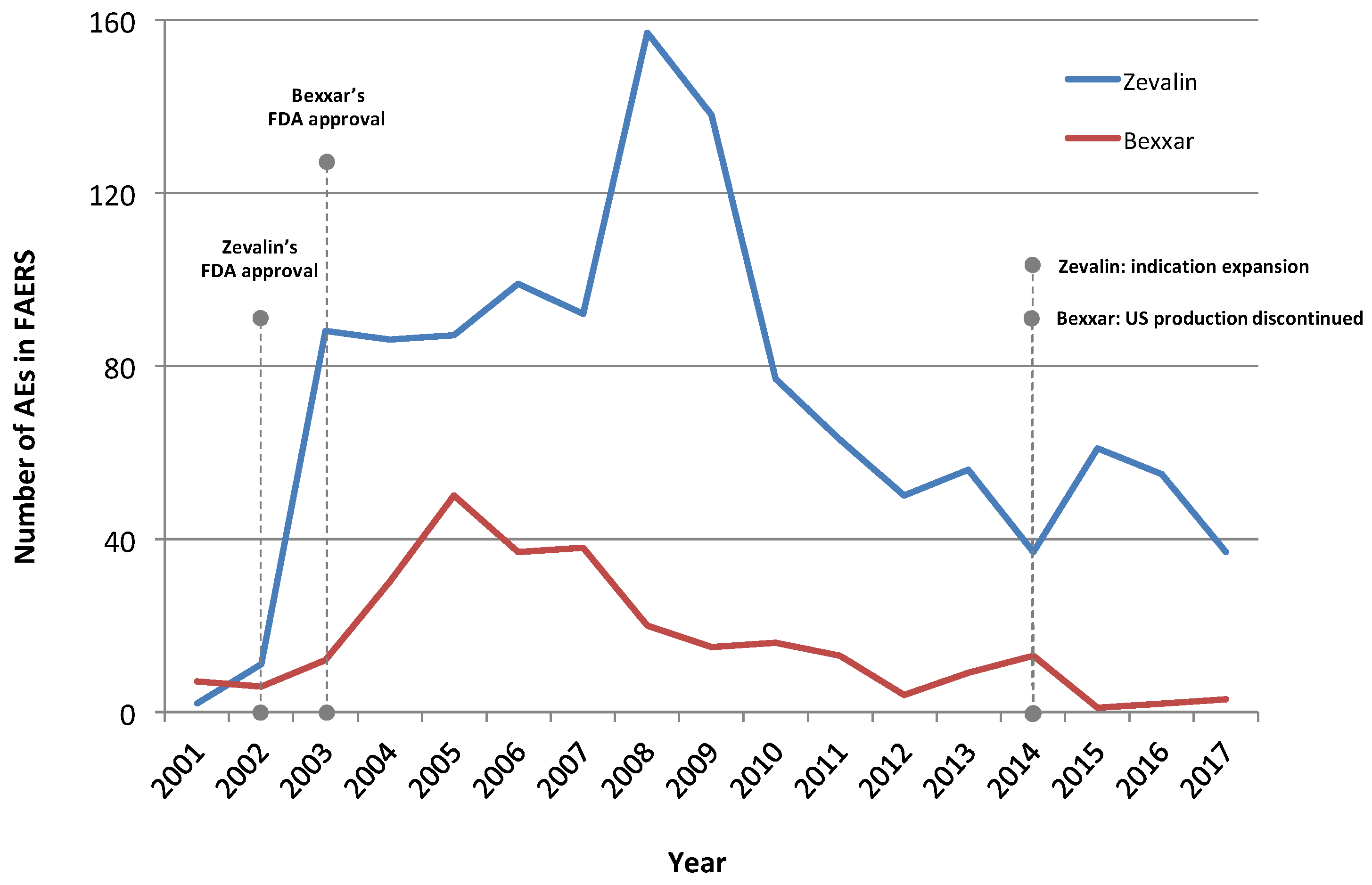