Antimicrobial Peptides for Topical Treatment of Osteomyelitis and Implant-Related Infections: Study in the Spongy Bone
Next Article in Special Issue

Biocompatible polymeric materials with potential to form functional structures in association with different therapeutic molecules have a high potential for biological, medical and pharmaceutical applications. Therefore, the capability of the inclusion of nano-Complex formed between the sodium salt of poly(maleic acid-alt-octadecene) and a β-lactam drug (ampicillin trihydrate) to avoid the chemical and enzymatic degradation and enhance the biological activity were evaluated. PAM-18Na was produced and characterized, as reported previously. The formation of polymeric hydrophobic aggregates in aqueous solution was determined, using pyrene as a fluorescent probe. Furthermore, the formation of polymer-drug nano-complexes was characterized by Differential Scanning Calorimetry-DSC, viscometric, ultrafiltration/centrifugation assays, zeta potential and size measurements were determined by dynamic light scattering-DLS. The PAM-18Na capacity to avoid the chemical degradation was studied through stress stability tests. The enzymatic degradation was evaluated from a pure β-lactamase, while the biological degradation was determined by different β-lactamase producing Staphylococcus aureus strains. When ampicillin was associated with PAM-18Na, the half-life time in acidic conditions increased, whereas both the enzymatic degradation and the minimum inhibitory concentration decreased to a 90 and 75%, respectively. These results suggest a promissory capability of this polymer to protect the β-lactam drugs against chemical, enzymatic and biological degradation. View Full-Text
Keywords: polymer-drug association; inclusion nano-complex; an amphiphilic polymer; polysoaps; antibiotic resistance; ampicillin trihydrate polymer-drug association; inclusion nano-complex; an amphiphilic polymer; polysoaps; antibiotic resistance; ampicillin trihydrate
►▼ Show Figures 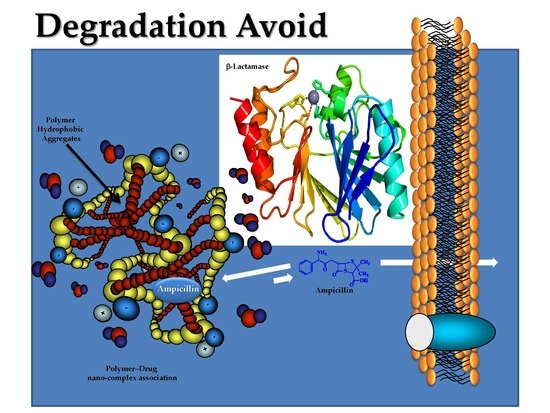