Alzheimer’s disease (AD) is progressive neurodegenerative disorder characterized by brain accumulation of the amyloid β peptide (Aβ), which form senile plaques, neurofibrillary tangles (NFT) and, eventually, neurodegeneration and cognitive impairment. Interestingly, epidemiological studies have described a relationship between type 2 diabetes mellitus (T2DM) and this pathology, being one of the risk factors for the development of AD pathogenesis. Information as it is, it would point out that, impairment in insulin signalling and glucose metabolism, in central as well as peripheral systems, would be one of the reasons for the cognitive decline. Brain insulin resistance, also known as Type 3 diabetes, leads to the increase of Aβ production and TAU phosphorylation, mitochondrial dysfunction, oxidative stress, protein misfolding, and cognitive impairment, which are all hallmarks of AD. Moreover, given the complexity of interlocking mechanisms found in late onset AD (LOAD) pathogenesis, more data is being obtained. Recent evidence showed that Aβ42 generated in the brain would impact negatively on the hypothalamus, accelerating the “peripheral” symptomatology of AD. In this situation, Aβ42 production would induce hypothalamic dysfunction that would favour peripheral hyperglycaemia due to down regulation of the liver insulin receptor. The objective of this review is to discuss the existing evidence supporting the concept that brain insulin resistance and altered glucose metabolism play an important role in pathogenesis of LOAD. Furthermore, we discuss AD treatment approaches targeting insulin signalling using anti-diabetic drugs and mTOR inhibitors. View Full-Text
Keywords: Alzheimer’s; insulin resistance; amyloid; TAU; cognition; insulin receptor; type 2 diabetes Alzheimer’s; insulin resistance; amyloid; TAU; cognition; insulin receptor; type 2 diabetes
►▼ Show Figures 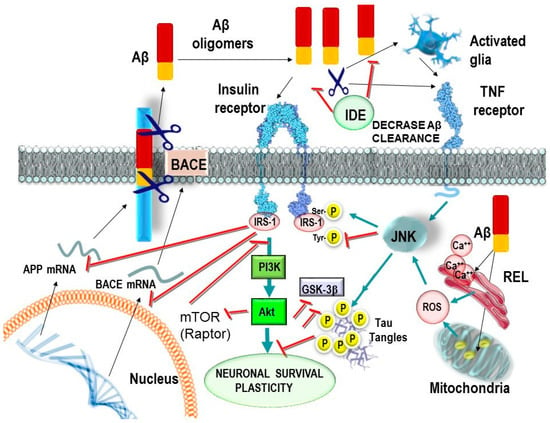