This case study explored how spatiotemporal data can develop key metrics to evaluate and understand elite soccer referees’ performance during one elite soccer match. The dynamic position of players from both teams, the ball and three elite referees allowed to capture the following performance metrics: (i) assistant referees: alignment with the second last defender; (ii) referee: referee diagonal movement—a position density was computed and a principal component analysis was carried to identify the directions of greatest variability; and (iii) referee: assessing the distance from the referee to the ball. All computations were processed when the ball was in-play and separated by 1st and 2nd halves. The first metric showed an alignment lower than 1 m between the assistant referee and the second last defender. The second metric showed that in the 1st half, the referee position ellipsis area was 548 m2, which increased during the 2nd half (671 m2). The third metric showed an increase in the distance from the referee to the ball and >80% of the distance between 5–30 m during the 2nd half. The findings may be used as a starting point to elaborate normative behavior models from the referee’s movement performance in soccer.
Keywords: performance analysis; refereeing; positional data; tracking systems; tactical positioning performance analysis; refereeing; positional data; tracking systems; tactical positioning

One international soccer match from elite adult male players was used for analysis. Data relate to one elite referee’s position, two assistant elite referees (AREF), all players and the ball. For that purpose, the TRACAB Optical Image Tracking System (Chyronhego, New York, NY, USA; https://chyronhego.com) captures and transforms the coordinates into a two-dimensional plane, with a frequency of 25 Hz. Supported by eight super-HD cameras, the players are identified based on their movements, shape, and color information [22]. Each camera creates a stitched panoramic view, allowing triangulation of the players and the ball due to a stereoscopic view [23]. Based on its accuracy (i.e., it has been showing a maximum delay of just three frames for all moving objects), several professional soccer leagues have been using it (e.g., English Premier League, German Bundesliga, or the Spanish La Liga) as well as UEFA Champions League and FIFA international tournaments.
Similarly, recent research has used the TRACAB system to explore physical performance according to age groups [22] and half variations [24], offensive performance in football [25], how the quality of opposition impact the spatial-temporal features of individual ball possessions [26], or even to understand the risk of contact exposure during football matches in the context of the COVID-19 pandemic [27]. This system has also provided reliable results compared with other reference systems (VICON motion capture system) [23]. When considering the total distance travelled and peak speed, only trivial deviations were found according to this reference system (0.42 ± 0.60% and <0.5%, respectively). Moreover, the root means square error was 0.09 m for position measurement, 0.09 m∙s−1 concerning the instantaneous speed, and 0.026 m∙s−2 in accelerations.

Three data-driven approaches were carried, and the following performance metrics were developed.

Referee position density was computed, and a principal component analysis (PCA) was performed to identify the displacement variability, with two orthogonal segments centered on the referee’s mean position.
A position density represented by a heat map (based on the referee’s x and y position coordinates across the match) was computed for both halves. The colored scatterplot represents a continuous 2D distribution, in which the dot sizes correspond to the swarm points density. The algorithm uses the x and y coordinates from the referee as the same size vectors, the local radii parameter surrounding every data point, and the weighted dots for the corresponding area parameter (for algorithm computation, see Sundqvist [28]). These procedures allow specifying pitch zones where the referee spent the most time (i.e., positioning density) and provide a visual perspective of the referee displacement across the game.
A PCA was applied to identify the referee position variability during the match, using the referee’s mean position on the pitch. The dataset consisted of one matrix for the referee (x(i), y(i)), where x(i) and y(i) represent the coordinates on the pitch during the match, with i = 1,...,N, where N is the match time. Two orthogonal segments were centered on the referee’s mean position, and the segments’ directions were driven by the eigenvectors of the PCA [29]. The results of this processing step were plotted within the referee position density heat map.

2.3. Distance from the Referee to the Ball

The distance from the referee to the ball was computed by the norm between the vectors using the following equation: where a is the referee, x and y are the coordinates for both goal-to-goal and pitch width directions, respectively, t is the time, and b is the ball. Moreover, distances were also analyzed according to the amount of variability expressed by the coefficient of variation.

2.4. Alignment Difference of the Assistant Referee with the 2nd Last Defender (Offside Line)

This metric was calculated based on the difference between the x-coordinate position of the assistant referee (AREF) (goal-to-goal direction) and the x-coordinate position of the 2nd last defender (from the defending team of the AREF half-pitch) according to the formula: where a is the AREF, x is coordinate for goal-to-goal direction, t is the time, and b is the 2nd last defender (see Figure 1). The computation excluded when the 2nd last defender moved to the offensive pitch.
Data from the 1st and 2nd halves were independently treated and processed when the ball was in-play (i.e., all the stoppages were excluded from the analysis). The calculations and visualizations were performed in Matlab® (The MathWorks Inc., Natick, MA, USA). The descriptive statistics and the PCA were computed with the SPSS software V24.0 (IBM SPSS Statistics for Windows, IBM Corp, Armonk, NY, USA).

Figure 2 shows the referee position density and the displacement variability (PCA outcomes). The referee displacement showed that, in the 1st half, the position ellipsis area was 548 m2, with the 1st principal component (length position) of 18 m, and with the 2nd principal component (width position) of 9 m. In the 2nd half, those values increased 123 m2, to 671 m2 for the ellipsis area and 2 m in both the 1st and 2nd component to 20 and 11 m, respectively, suggesting lower diagonal movements and shorter displacements around the center of the ellipsis.

3.2. Distance from the Referee to the Ball

Figure 3 and Table 1 characterize the distance from the referee to the ball for each half. The referee spent >80% of the time within the distance standing between 5–30 m. The values slightly increased during the 2nd half (from 17.66 to 18.25 m, median) with approximately 50% of the coefficient of variation and ~0.5 of skewness. The overlap of two density histograms (i.e., both halves) was 89.1%.

3.3. Alignment Difference of the AREF with the 2nd Last Defender (Offside Line)

The results from this case study suggested that the proposed measures may be used to understand the positioning of soccer elite referees during match-play. The elite referee maintained a distance of ~18 m to the ball location in the observed match, mainly in a diagonal perspective, as revealed by his heatmap and ellipsis area. Regarding the assistant referees, average values of 1 m distance to the offside line were detected, suggesting that assistant referees attempt to maintain short distances to the offside line. The difference between the assistant referees from the 1st to the 2nd half may show sensitivity to the teams playing style and the game’s dynamic and unpredictable nature. Considering this, it may be possible that the present variables are sensitive to capture the adaptations in the referees positioning as the match progresses. Nevertheless, it is important to note that the results were sustained on a case study, and thus, it may refrain from achieving more robust inferences. Despite that, relevant and practical information can be depicted, which might help induce variability and adaptation in specific practice planning of soccer referees.

This work was partially supported by the National Funding through the Portuguese Foundation for Science and Technology, I.P., under the project UID04045/2020.

The study was conducted according to the guidelines of the Declaration of Helsinki and approved by the Ethics Committee (CE-UBI-Pj-2020-043). 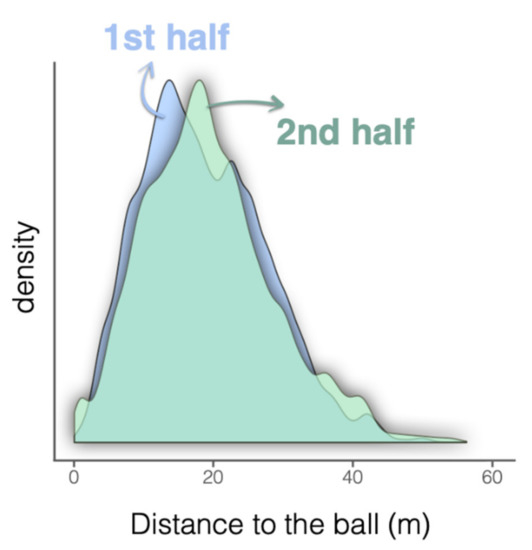 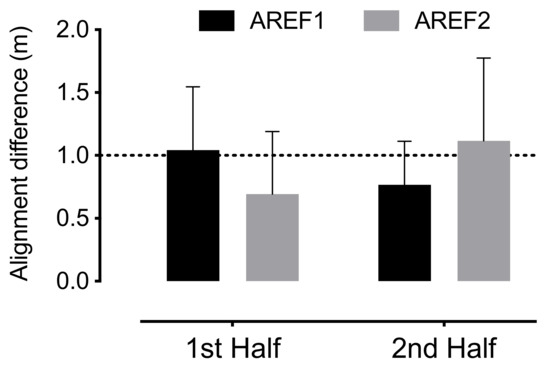