Magnetoactive (MA) foam, with its tunable mechanical properties and magnetostriction, has the potential to be used for the development of soft sensor technology. However, researchers have found that its mechanical properties and magnetostriction are morphologically dependent, thereby limiting its capabilities for dexterous manipulation. Thus, in this work, MA foam was developed with additional capabilities for controlling its magnetostriction, normal force, storage modulus, shear stress and torque by manipulating the concentration of carbonyl iron particles (CIPs) and the magnetic field with regard to morphological changes. MA foams were prepared with three weight percentages of CIPs, namely, 35 wt.%, 55 wt.% and 75 wt.%, and three different modes, namely, zero shear, constant shear and various shears. The results showed that the MA foam with 75 wt.% of CIPs enhanced the normal force sensitivity and positive magnetostriction sensitivity by up to 97% and 85%, respectively. Moreover, the sensitivities of the storage modulus, torque and shear stress were 8.97 Pa/mT, 0.021 µN/mT, and 0.0096 Pa/mT, respectively. Meanwhile, the magnetic dipolar interaction between the CIPs was capable of changing the property of MA foam from a positive to a negative magnetostriction under various shear strains with a low loss of energy. Therefore, it is believed that this kind of highly sensitive MA foam can potentially be implemented in future soft sensor systems. View Full-Text
Keywords: magnetostriction; normal force; porous polymer; magnetic dipolar interaction magnetostriction; normal force; porous polymer; magnetic dipolar interaction
►▼ Show Figures 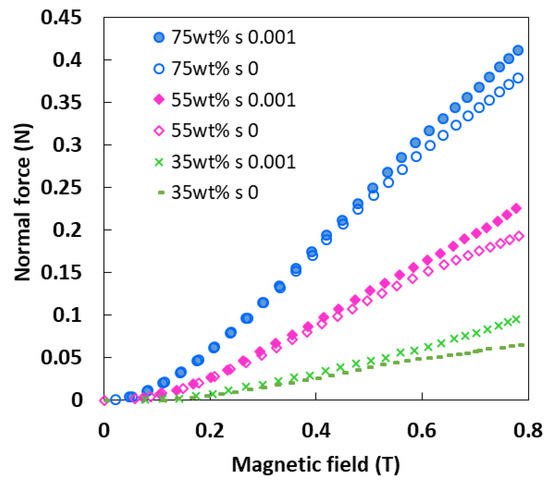