Nanocomposite based on Poly (para-phenylene)/Chemical Reduced Graphene Oxide as a Platform for Simultaneous Detection of Ascorbic Acid, Dopamine and Uric Acid
Previous Article in Journal

Highly sensitive multicomponent materials designed for the recognition of hazardous compounds request control over interfacial chemistry. The latter is a key parameter in the construction of the sensing (macro) molecular architectures. In this work, multi-walled carbon nanotubes (CNTs) were deposited on diazonium-modified, flexible indium tin oxide (ITO) electrodes prior to the electropolymerization of pyrrole. This three-step process, including diazonium electroreduction, the deposition of CNTs and electropolymerization, provided adhesively-bonded, polypyrrole-wrapped CNT composite coatings on aminophenyl-modified flexible ITO sheets. The aminophenyl (AP) groups were attached to ITO by electroreduction of the in-situ generated aminobenzenediazonium compound in aqueous, acidic medium. For the first time, polypyrrole (PPy) was electrodeposited in the presence of both benzenesulfonic acid (dopant) and ethylene glycol-bis(2-aminoethylether)-tetraacetic acid (EGTA), which acts as a chelator. The flexible electrodes were characterized by XPS, Raman and scanning electron microscopy (SEM), which provided strong supporting evidence for the wrapping of CNTs by the electrodeposited PPy. Indeed, the CNT average diameter increased from 18 ± 2.6 nm to 27 ± 4.8, 35.6 ± 5.9 and 175 ± 20.1 after 1, 5 and 10 of electropolymerization of pyrrole, respectively. The PPy/CNT/NH2-ITO films generated by this strategy exhibit significantly improved stability and higher conductivity compared to a similar PPy coating without any embedded CNTs, as assessed by from electrochemical impedance spectroscopy measurements. The potentiometric response was linear in the 10−8–3 × 10−7 mol L−1 Pb(II) concentration range, and the detection limit was 2.9 × 10−9 mol L−1 at S/N = 3. The EGTA was found to drastically improve selectivity for Pb(II) over Cu(II). To account for this improvement, the density functional theory (DFT) was employed to calculate the EGTA–metal ion interaction energy, which was found to be −374.6 and −116.4 kJ/mol for Pb(II) and Cu(II), respectively, considering solvation effects. This work demonstrates the power of a subtle combination of diazonium coupling agent, CNTs, chelators and conductive polymers to design high-performance electrochemical sensors for environmental applications. View Full-Text
Keywords: polypyrrole; diazonium; multiwalled carbon nanotubes; chelator; heavy metal ions; electrochemical sensors polypyrrole; diazonium; multiwalled carbon nanotubes; chelator; heavy metal ions; electrochemical sensors
►▼ Show Figures 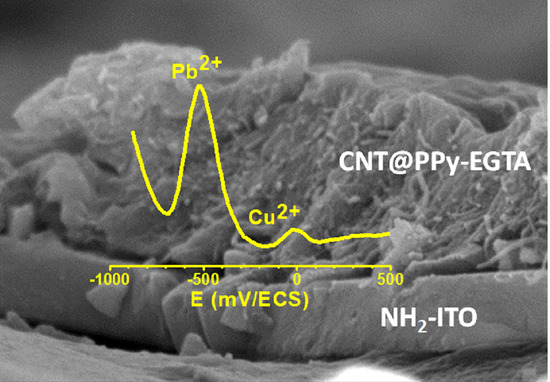