Endocrine disruptors (EDs) are contaminants that may mimic or interfere with the body’s hormones, hampering the normal functions of the endocrine system in humans and animals. These substances, either natural or man-made, are involved in development, breeding, and immunity, causing a wide range of diseases and disorders. The traditional detection methods such as enzyme linked immunosorbent assay (ELISA) and chromatography are still the golden techniques for EDs detection due to their high sensitivity, robustness, and accuracy. Nevertheless, they have the disadvantage of being expensive and time-consuming, requiring bulky equipment or skilled personnel. On the other hand, early stage detection of EDs on-the-field requires portable devices fulfilling the Affordable, Sensitive, Specific, User-friendly, Rapid and Robust, Equipment free, Deliverable to end users (ASSURED) norms. Electrochemical impedance spectroscopy (EIS)-based sensors can be easily implemented in fully automated, sample-to-answer devices by integrating electrodes in microfluidic chips. The latest achievements on EIS-based sensors are discussed and critically assessed. View Full-Text
Keywords: endocrine; biosensor; impedance; MIP; immunosensor; aptasensor endocrine; biosensor; impedance; MIP; immunosensor; aptasensor
►▼ Show Figures 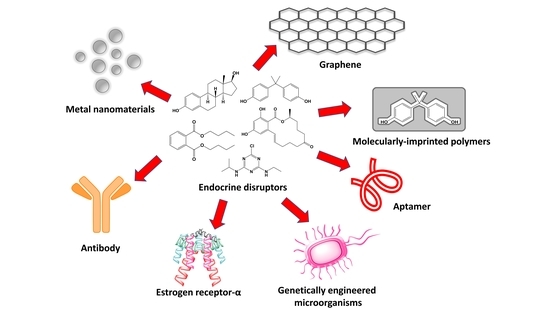