A cellulose nanocrystal (CNC)-reinforced polymethylmethacrylate (PMMA) fiber was obtained via electrospinning, and then attached between the two tines of a quartz tuning fork (QTF). The change in the resonance frequency of the CNC/PMMA composite fiber-coated QTF (CP-QTF) was measured upon being exposed to various concentrations of ethanol vapor. The frequency decreased as the ethanol vapor concentration increased, because the modulus of the composite fiber decreased due to the adsorption of the ethanol vapor. The composite fiber obtained at a high relative humidity (RH; 60% RH, CP60 fiber) produced a highly porous structure as a result of the moisture adsorption-induced phase separation of PMMA. The porosity of the CP60 fiber was higher than that of a CNC/PMMA composite fiber obtained at 30% RH (CP30 fiber) or that of a plain PMMA fiber obtained at 60% RH (P60 fiber), because hygroscopic CNCs promote moisture adsorption. The CP60 fiber-coated QTF (CP60-QTF) exhibited a greater frequency change and faster response time than P60-QTF and CP30-QTF upon exposure to ethanol vapor at the same concentration. The enhanced performance of CP60-QTF was attributed to its higher surface area and larger fiber modulus. View Full-Text
Keywords: quartz tuning fork (QTF); electrospinning; cellulose nanocrystal (CNC); gas sensor quartz tuning fork (QTF); electrospinning; cellulose nanocrystal (CNC); gas sensor
►▼ Show Figures 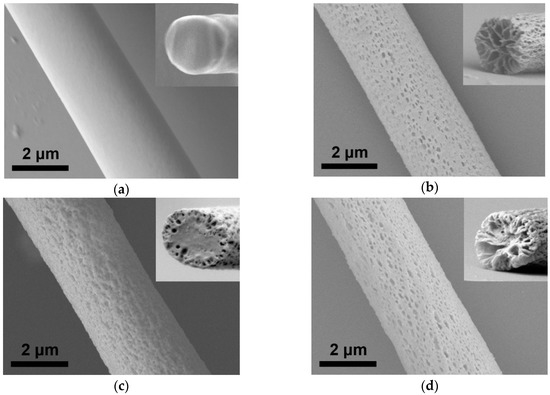