Monitoring and analysis of open air basins is a critical task in waste water plant management. These tasks generally require sampling waters at several hard to access points, be it real time with multiparametric sensor probes, or retrieving water samples. Full automation of these processes would require deploying hundreds (if not thousands) of fixed sensors, unless the sensors can be translated. This work proposes the utilization of robotized unmanned aerial vehicle (UAV) platforms to work as a virtual high density sensor network, which could analyze in real time or capture samples depending on the robotic UAV equipment. To check the validity of the concept, an instance of the robotized UAV platform has been fully designed and implemented. A multi-agent system approach has been used (implemented over a Robot Operating System, ROS, middleware layer) to define a software architecture able to deal with the different problems, optimizing modularity of the software; in terms of hardware, the UAV platform has been designed and built, as a sample capturing probe. A description on the main features of the multi-agent system proposed, its architecture, and the behavior of several components is discussed. The experimental validation and performance evaluation of the system components has been performed independently for the sake of safety: autonomous flight performance has been tested on-site; the accuracy of the localization technologies deemed as deployable options has been evaluated in controlled flights; and the viability of the sample capture device designed and built has been experimentally tested. View Full-Text
Keywords: robotics; multi-agent systems; water sampling; industrial UAV robotics; multi-agent systems; water sampling; industrial UAV
►▼ Show Figures 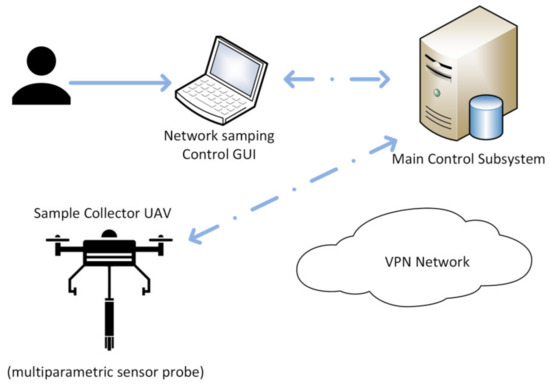