During the last years, attention and controversy have been present for the first commercially available equipment being used in Electrocardiographic Imaging (ECGI), a new cardiac diagnostic tool which opens up a new field of diagnostic possibilities. Previous knowledge and criteria of cardiologists using intracardiac Electrograms (EGM) should be revisited from the newly available spatial–temporal potentials, and digital signal processing should be readapted to this new data structure. Aiming to contribute to the usefulness of ECGI recordings in the current knowledge and methods of cardiac electrophysiology, we previously presented two results: First, spatial consistency can be observed even for very basic cardiac signal processing stages (such as baseline wander and low-pass filtering); second, useful bipolar EGMs can be obtained by a digital processing operator searching for the maximum amplitude and including a time delay. In addition, this work aims to demonstrate the functionality of ECGI for cardiac electrophysiology from a twofold view, namely, through the analysis of the EGM waveforms, and by studying the ventricular repolarization properties. The former is scrutinized in terms of the clustering properties of the unipolar an bipolar EGM waveforms, in control and myocardial infarction subjects, and the latter is analyzed using the properties of T-wave alternans (TWA) in control and in Long-QT syndrome (LQTS) example subjects. Clustered regions of the EGMs were spatially consistent and congruent with the presence of infarcted tissue in unipolar EGMs, and bipolar EGMs with adequate signal processing operators hold this consistency and yielded a larger, yet moderate, number of spatial–temporal regions. TWA was not present in control compared with an LQTS subject in terms of the estimated alternans amplitude from the unipolar EGMs, however, higher spatial–temporal variation was present in LQTS torso and epicardium measurements, which was consistent through three different methods of alternans estimation. We conclude that spatial–temporal analysis of EGMs in ECGI will pave the way towards enhanced usefulness in the clinical practice, so that atomic signal processing approach should be conveniently revisited to be able to deal with the great amount of information that ECGI conveys for the clinician. View Full-Text
Keywords: Electrocardiographic Imaging; signal processing; cardiac indices; spatial–temporal processing; Long-QT syndrome; infarction; T-wave alternans; control subject Electrocardiographic Imaging; signal processing; cardiac indices; spatial–temporal processing; Long-QT syndrome; infarction; T-wave alternans; control subject
►▼ Show Figures 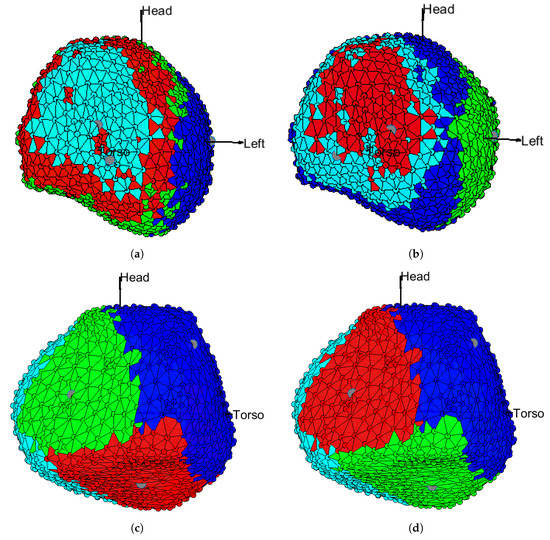