Towards Deep-Learning-Driven Intrusion Detection for the Internet of Things

Cyber-attacks on the Internet of Things (IoT) are growing at an alarming rate as devices, applications, and communication networks are becoming increasingly connected and integrated. When attacks on IoT networks go undetected for longer periods, it affects availability of critical systems for end users, increases the number of data breaches and identity theft, drives up the costs and impacts the revenue. It is imperative to detect attacks on IoT systems in near real time to provide effective security and defense. In this paper, we develop an intelligent intrusion-detection system tailored to the IoT environment. Specifically, we use a deep-learning algorithm to detect malicious traffic in IoT networks. The detection solution provides security as a service and facilitates interoperability between various network communication protocols used in IoT. We evaluate our proposed detection framework using both real-network traces for providing a proof of concept, and using simulation for providing evidence of its scalability. Our experimental results confirm that the proposed intrusion-detection system can detect real-world intrusions effectively. View Full-Text
Keywords: Internet of Things (IoT); Intrusion-Detection System (IDS); security; deep learning; machine learning Internet of Things (IoT); Intrusion-Detection System (IDS); security; deep learning; machine learning
►▼ Show Figures 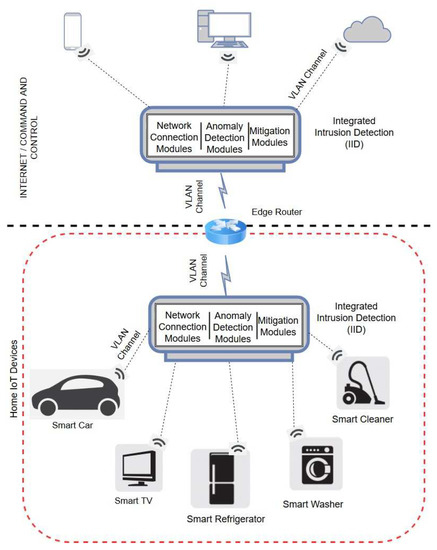 
Thamilarasu, Geethapriya; Chawla, Shiven. 2019. "Towards Deep-Learning-Driven Intrusion Detection for the Internet of Things." Sensors 19, no. 9: 1977.